Last month, Gotham Academy #10 got downright Shakespearean when the search for the mysterious Calamity saw Olive Silverlock, Maps Mizoguchi, and the rest of the Gotham Academy gang of intrepid teen detectives placed right in the middle of Macbeth and Clayface’s vendetta against the school’s drama teacher Simon Trent.

This month in Gotham Academy #11, the gang heads off campus to Gotham City proper in search for the truth about Olive’s mother and the connection with the costumed villain Calamity. Oh yeah, and there’s a guest appearance by Red Robin (Tim Drake) because cameos by the Batfamily are always welcome!

For the rest of this review (and my first with Word of the Nerd!!), head on over to the site to check it out!

Spoilers, images, and faintly disjointed squeeing for the issue abound. Read at your own risk if you’re not up to date!

For the first time since he faked his own death, Dick Grayson returns home to Gotham City. But will Spyral ever really let him go for good? 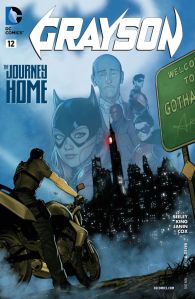 Writer: Tom King & Tim Seeley (with Tom King on this month’s script)
Artist: Mikel Janin
Colorist: Jeromy Cox
Originally published:  September 2015
Rating: 5/5 would recommend to anyone that was reading my James Bond reviews and craves a book that subverts the spy genre

Grayson #12 is the book that fandom has been waiting for.

A huge issue that many fans and haters alike have commented on has been the distance between Dick and the other members of the Batfamily. Off in Europe for much of the series’ run, Dick has been distanced from his family even as he made new connections with Helena, Tiger, and other members of SPYRAL. When he is in contact with his family members, it’s brief and unsatisfying on all levels.

In Grayson #12 the team finally brings Dick home. At the end of the previous issue Dick, fed up with all the shady subterfuge coming from SPYRAL, sends Bruce one last message telling him that he’s coming home.
END_OF_DOCUMENT_TOKEN_TO_BE_REPLACED

Some spoilers under the cut as well as references to the first issue.

END_OF_DOCUMENT_TOKEN_TO_BE_REPLACED

This NCBD post is short and salty because I was mostly disappointed by the books that I read… So disappointed that I didn’t exactly try for serious analysis.

This week I got three lady-centered comic books that are all from DC: Starfire #4, Gotham Academy #10, and the Harley Quinn Road Trip Special. Unfortunately, two out of the three books weren’t exactly my thing. END_OF_DOCUMENT_TOKEN_TO_BE_REPLACED

No, there’s not some new comic out that you’re all missing.

This NCBD I only got one book and it was last month’s Jem. I’m not writing about the series just yet because I’m waiting to get the last issue. When I get it, I’m going to do a big post on the comic and how it snuck up on me as a really fantastic read that’s really diverse, girl-focused, and has canon F/F relationships! I watched Jem as a kidlet and even met the actress that played her, but the comic really wasn’t on my radar until a few weeks ago. So I’m really excited that it works for me so darn well!

But for now, I’ve got nothing more than an outline so I’ll hold off on further gushing!

Spoilers and images for the issue abound. Read at your own risk if you’re not up to date!

“It’s Grayson versus…Grayson? To save Agent 1, Dick must face his most dangerous enemy yet: himself.”

his week, the only book I’m reading for #NCBD is Grayson #11.

Thanks to my ridiculously short attention span, Grayson is the only comic I’m reading that I remember to pick up every month from Comixology.

And boy is it worth it.

I mean, it’s got two of my favorite writers (Tom King and Tim Seeley) on the plot with King taking up writing duties for this month , fantastic art and colors from Mikel Janin and Jeromy Cox, and of course, my actual favorite superhero turned superspy in the starring role.

This issue’s summary had me hyped from the first time we saw solicits go out a few months back and of course, the book lives up to the hype.

END_OF_DOCUMENT_TOKEN_TO_BE_REPLACED

I kept it simple this week when I was on comixology.

Mostly, that was because I blanked on what DC books I wanted and I’m on a tight budget until payday. But at the same time, there were only two books that I really wanted to buy: Archie #2 by Mark Waid and Fiona Staples and Secret Wars: Secret Love with a whole lot of people. (I’ll talk more about the individual stories and creative teams in a minute).

I don’t regret buying either book or yelling at my coworkers until they came to read them with me.