Spoilers and images for the issue abound. Read at your own risk if you’re not up to date!

“It’s Grayson versus…Grayson? To save Agent 1, Dick must face his most dangerous enemy yet: himself.”

his week, the only book I’m reading for #NCBD is Grayson #11.

Thanks to my ridiculously short attention span, Grayson is the only comic I’m reading that I remember to pick up every month from Comixology.

And boy is it worth it.

I mean, it’s got two of my favorite writers (Tom King and Tim Seeley) on the plot with King taking up writing duties for this month , fantastic art and colors from Mikel Janin and Jeromy Cox, and of course, my actual favorite superhero turned superspy in the starring role.

This issue’s summary had me hyped from the first time we saw solicits go out a few months back and of course, the book lives up to the hype.

Grayson #11 brings us the third part of the ‘Nemesis’ storyline that started back in issue nine with the murders of several agents from different agencies during SPYRAL missions. Helena Bertinelli is the new director of SPYRAL (and okay how awesome would it have been if she was SPYRAL’s center?? /winkwink nudgenudge/)and she’s dealing with some major issues as all of the heads of agencies around the world demand that she get her house in order.

But yeah, within the past two episodes we’ve seen the body count ratchet up and Lex Luthor show up out of nowhere, all while a betrayal is in the works. At the end of issue ten, we saw Tiger/Agent 1 underneath some Roman catacombs surrounded by skulls in what’s possibly one of the creepiest things I’ve seen in Grayson.  But Tiger’s not alone in the catacombs. He’s there with several dead bodies and someone who outwardly appears to be a murderous Dick Grayson.

So of course, that’s where issue #11 picks up, with Tiger having recently gotten his butt kicked by this weird Grayson clone.

One of the things that I love about Tiger as a character is that he’s just ready to take a licking and keep on ticking. Even when he’s in the middle of getting the crap beaten out of him, he doesn’t give up. He’s always there like “hell yeah, beat me up some more, I won’t give in”. He’s just such a determined character and I love that even when he’s like minutes away from death, that he doesn’t give up or panic.

He just straight up dares his opponent to do their worst.

This issue actually gives us a bit more of an insight into Tiger’s character. I know, the focus is largely on Dick and that’s cool because the book is called Grayson. It’s not a team book, not unless you stretch the definition.

But that’s why the little things that you glean are so important. We get to see a bit about who Tiger is as a person, what makes him tick and what he does when backed into a corner. We get to see what Tiger does when someone that’s very definitely a bad guy turns out to be someone that he’s close to.

I can’t wait to see what we find out about Tiger in the next issue because what we’re seeing in this issue raises a fair amount of questions, one of which is about the reason why Tiger looks like he’s betraying SPYRAL. (I feel so bad for Helena, let me tell you…)

Okay so I think I got ahead of myself because I adored Tiger so darn much but hey, let’s talk about the plot. I liked this month’s episode so much because I feel like everything is really coming together. I rarely have complaints about Grayson but lately, I’ve been really feeling the issues. I mean, this entire arc has been fantastic. I can’t get enough of the twists and turns that Seeley and King have been putting into the arc.

So yeah, Tiger’s about to have his clock cleaned in a major way by this bloody, grinning Grayson wannabe and then we get actual Dick Grayson showing up and being his usual quippy self. 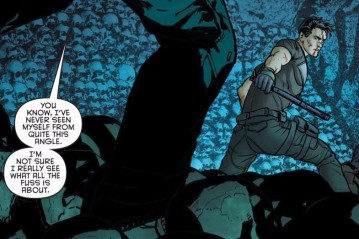 Man, i just love the quips! There are so many of them this issue and here’s the thing that’s awesome: unlike certain spy properties I could name (JAMES BOND) the quips don’t feel wooden. They feel like something an actual person would say and they actually get laughs. Real laughs.

The quipping is important here too because Dick tries to keep it up. He has no idea who he’s fighting, only that they have his face and his body. So he quips as he tries to figure things out, going from guessing Clayface to Killer Croc to Wonder Woman (his comments about Wondy btw, were hilarious and okay, I lowkey ship them…).

Dick quips and keeps on quipping until the second that the tables turn. The wannabe gets under his skin, in his head and uses his story, secrets about him that he thinks no one should know.  And that throws Dick off his game in a major way. He goes from quipping and kicking butt to scrambling to try and get the upper hand.

All of the times that Dick hasn’t been there to save the day or when he just straight up failed are brought up including his most recent failure: the death of Agent 8/Alia.

Up until this point I’d been thinking “okay maybe I see where this is going” (because I’m slow to get the big picture) but when the wannabe brought Alia up? It clicked.

One of the things I’ve always disagreed with when it came to talking with other fans about Grayson was how many of the people I saw talking about the book saw it as shallow. They read scenes as unimportant and saw certain things as pointless.

Alia’s interactions with Dick were “out of character” for him and shouldn’t have happened. It was a pretty big deal for something that everyone was saying was a non-issue, a bit of male-gazey wank fodder for a series that otherwise lacks it.

But here we are eight issues later and it’s all starting to make sense. Alia is bitter, so bitter. She makes multiple references to Dick putting on a show, to how he changes identities without effort. She shows him a truth about SPYRAL and about the Hypnos implants and it just wrecks him. The implants don’t just work to control the people around Dick, they also work to control him and his perceptions.

We’re starting to see more of what’s going on and while we don’t exactly know Why, we’re getting there and it’s going to be good. 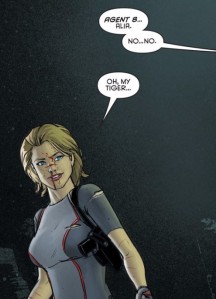 After the big reveal (to Tiger who’s ripped his Hypnos implants out and um — ow) and Alia’s kind of ominous “Oh, my Tiger… We have so much to discuss.”, we skip  back to SPYRAL headquarters and the debriefing with Helena.

We don’t get to see the conversation that happens between Tiger and Alia, but we get the aftermath on both sides. Again, we’re seeing more than Dick is. It’s not the entire picture but it’s enough that when Tiger says that Maxwell Lord is responsible for the deaths, we do a double take.

Because that’s not the Tiger we know.

After all that we go through — after all he goes through — and the blame lands on Maxwell Lord? I mean, he’s an obvious choice considering how mind control and unfiltered evil is his thing, but isn’t it just a little too neat?

But since I’m not in this book as a voice of reason, Helena latches on to the obvious and starts thinking about striking back. Something that Dick is so not here for. He quits and then walks out, heading back to his room at St. Hadrian’s and basically punching all of the plot holes into the fan fiction I’ve written so far.

But we do get a nice little bridge to Dick returning to Gotham and the current arc of Batman (which I’m not reading so feel free to fill me in if it’s important) with Dick sending one last message to a still-silent Mr. Malone.

Okay so this is already running a bit long so I’m going to try and wrap up. This is difficult for me because this is easily my favorite comic out right now so when I say good things, I want to say all of the good things. Ya feel?

But here goes an attempt at wrapping things up:

Mikel Janin’s art is on point as always. He does some magical things with layouts here that I can’t get over. I had to flip my kindle around to read part of the best two-page spread and I’m forever loving that we get the spiral set up whenever the Hypnos implant is used.

And I think that Jeromy Cox’s coloring really is perfect for Janin’s art. It just makes his lines pop and it just works so well! My favorite page in the entire issue was the first image of the catacombs because it was just colored so well and was so scary. Gosh!!

At the heart of this issue is stuff about identity and betrayal and they’re intertwined. Dick’s identity as Dick-Robin-Nightwing-Agent 37 comes up as does his ability to switch personas and take on these “new” identities. We also get Alia wearing Dick’s face as a disguise, hiding her identity in order to start chaos.

With Dick gone to Gotham and everyone else around Helena working against whatever she has planned for SPYRAL, it’s going to be interesting to see what comes next. I’m looking forward to issue 12 and the series making a stop in Gotham City, but I’m also looking forward to the future.

Frau Netz and her sister Agent Zero are obviously setting up a coup and regardless of whatever they have planned, it’s going to be terrible for Helena. It has to be. The fallout is going to be spectacular!

This has been another fantastic issue of Grayson and I’m looking forward to seeing where our great creative team takes us.  Like I said on tumblr,  if you like gorgeous art, superheroes, less than super spies, and Dick Grayson being a quippy badass, you’d better be reading Grayson!

Zina writes about comics, nerd history, and ridiculous romance novels when not working frantically on her first collection of short stories and complaining about stuff. One day, she'll settle down and write that novel.
View all posts by Zeenah →
This entry was posted in #NCBD, DC Comics and tagged #ncbd, DC Comics, Dick Grayson, Grayson, helena bertinelli, Mikel Janin, The Tiger, The Tiger King of Kandahar, Tim Seeley, Tom King. Bookmark the permalink.