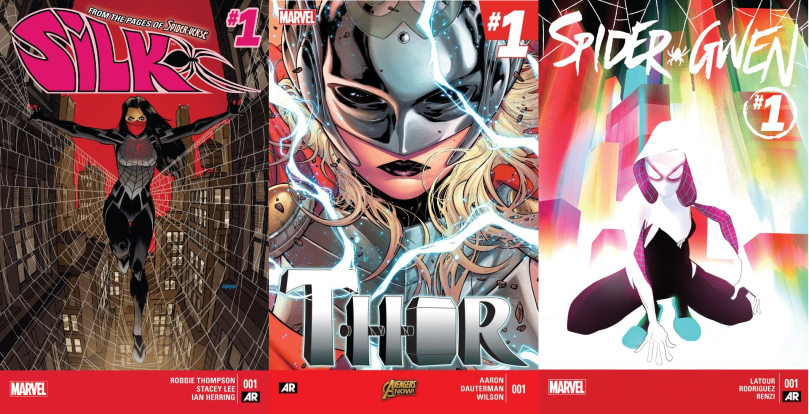 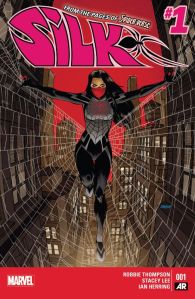 I literally had no idea who Cindy Moon is or where she came from or anything like that. I wanted to buy the book to support Stacey Lee and her adorable art as well as to show how much I appreciate these diverse books in Marvel’s lineup.

Now, I don’t tend to read the Spider-Man books so my experience with the character and his cast comes largely from apearances in other characters books or event tie-ins. The fact that this Cindy/Silk story has come from  a tie-in means that I went into this with worry that I’d be SUPER lost.

But that’s okay and so far, most of my worries were unfounded.

Because Robbie Thompson does a good job getting you caught up.  If I was lost at any poiont, it’s because Cindy is also lost and trying to figure her way around the world, not because I felt like this #1 didn’t do its job in clearing up stuff. 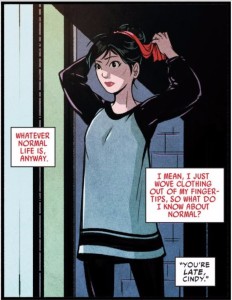 Silk #1 is a fantastic and cute comic. It reminds me of Anya  Corazon’s first appearance in Heart of the Spider where you’re seeing her dive into the Spider-Peep game.  There are differences between the two characters (of course) but I’ve got a soft spot in my heart for young female superheroes  trying to navigate the world and that’s what we get with both of them. What I like about Cindy Moon so far is that she’s cute, quippy, and also seems to be on her way to being a fleshed out, nuanced character.

As you know from following me on this blog, cute and quippy women are my weakness even when they’re fictional. I like that we do get this balance that Cindy isn’t a Peter-clone (I know that we’ve been there, done that) but that she’s got her own business to take care of. She’s the kind of character I’d want to read a YA novel series about because between her mysterious backstory (what did happen to her family??), her attempts at figuring out her powers and strength, and  finding the man who helped put her in the bunker, you’ve got all the makings of a fantastic story.

I think I’m going to go looking for a trade paperback if one’s out just so I can catch up! 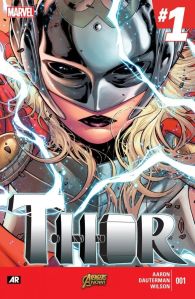 I went into Thor #1 knowing that the new Thor was Jane because I read spoilers for books that I don’t plan on reading.

I had written off the series as “not my thing” ages ago which is weird because normally I’m so here for anything that gives me women in power, mythology, and that one panel of a burly shirtless dude!Thor being sullen. Seriously, I want to go back in time and shake myself for not checking it out sooner.

This relatively new Thor series follows some Avengers event that leaves Thor unworthy to wield his great hammer Mjolnir. The book opens with an attack on an underwater Roxxon lab/base by blue-skinned frost giants. I mean… All I got from the opening was that there are a lot of dead Roxxon employees and attack sharks right now and that’s terrible. 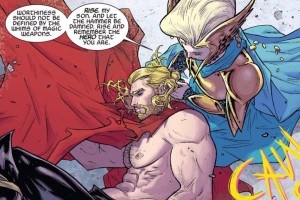 What I’m here for  — what I’m really invested in — is how we get a ton of pages revolving around Thor mourning the loss of his hammer while on the moon.

I know I shouldn’t laugh. It’s not that funny, but basically Thor is kind of shirtless and crying and curled around his  hammer and I’m a horrible person.

It doesn’t help that Dauterman’s dude!Thor is a babe of the highest caliber and that I’m pretty shallow as far as Thors are concerned.

Despite no longer having his trusty hammer at his side, dude!Thor goes into battle against the giants and the smirky, dark elf Malekith and basically gets his ass handed to him.

At the same time (the last two pages actually) we see a shadowy figure on the moon picks up the hammer and WHAM — new Thor.

I like the first issue but I’d probably like it more if dude!Thor wasn’t the focus of the book or if we got more pages dedicated to Jane!Thor. The point of this new series was that dude!Thor wasn’t worthy and was replaced but we don’t get enough of either.  I don’t get why dude!Thor no longer has the hammer and I also don’t get why we didn’t get more of Jane!Thor in the issue. She’s only on the cover and the last two pages. That’s not the bes thing ever…

I’m going to have to read the next issue to find out more (and I don’t mind doing that at all), that’s the point of this sort of storytelling, but shouldn’t the character on the cover be in more than two pages in her own book? 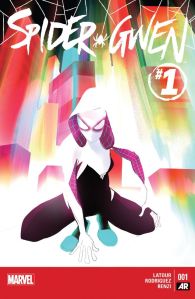 Writer: Jason Latour
Artist: Robbi Rodriguez
Colorist: Rico Renzi
Originally published:  February 2015
Rating: 5/5 would like a Spider-Hoodie of my own though

Everyone I know loves Spider-Gwen.

Hell, I love her and this is the first thing I’ve ever read with her.  I like Gwen Stacy as a character (despite having a first name for a last name) and the idea of casting her as the lead in her own Spider-Series in the aftermath of that Spider-centric series I never read is pretty cool.

I mean, I love anything that gets me more lady heroes and I love this sort of role reversal in comics. I’ve loved it since that one Robin issue where Tim Drake was never Robin and Stephanie Brown wore the tights from the get go.

Spider-Gwen gets me because he flips a lot of established superhero dynamics on their heads both by having Gwen be a hero and by what it does to reinterpret several other characters. I love, love, LOVE that we’re getting Gwen alive and kicking butt. Do you know how mad I still am over how she’s previously been treated both by 616 canon and Marvel fans? This book actually helps me soften some of my anger because ah! It’s Gwen Stacy and she’s got a Spider-Hoodie and she’s so darn great.

Gwen here gets to shine and I love ever single page. She’s funny even when she’s failing at it, hopeful  in a world that wants her dead, and she’s seriously looking like she’s sneaking up on Miles Morales as my next favorite Spider-Peep. Sure, I’m once again left lost in the wake of Spider-Verse but it’s been an hour since reading Silk so I’m getting used to it. This book feels good but it also makes me feel good –aside from the cliffhanger that we get at the end of the issue that sees Gwen about to plummet to her doom.

I’m going to get more. 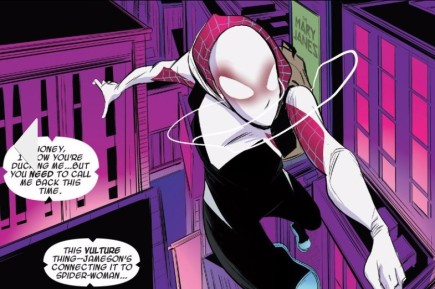 The best thing about reading these Marvel Firsts is that by now, I can buy the trades. I liked the three books I bought via the sale but they were just enough to whet my appetite. I’m still going to need more to fall thoroughly in love with these characters (or in Thor‘s case, to just find out more about the characters). I’m pleased with all of them even if I am a bit sore about how underused Jane!Thor was in her first appearance so I’m going to check out trades right now and I think you all should too.

Have you guys picked up any books from that Comixology sale? If so, I want to hear which Marvel First was your fave!