Some spoilers under the cut as well as references to the first issue. 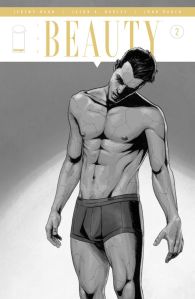 Image Comics is where I go for books that make me uncomfortable.

The Beauty with its plot revolving around an STD that makes people more and more beautiful every day while exacting a terrible price is a book that’s a little hard to read. I live for that though. When I buy a book from Image, chances are it’s because I want to question things and look at the world with a little bit of an edge to it.

Our writer/artist team of Jeremey Haun and  Jason Hurley  certainly delivers with The Beauty. At first, it doesn’t make sense that this is what they chose to write about. How do you make a sexually transmitted disease that turns people beautiful into something that’s genuinely horrifyng? As far as viruses go, this one doesn’t have much in the way of symptoms except for a constant fever and how people with the virus get prettier and prettier every passing day.

It shouldn’t be scary.

Except for how it is.

Issue two comes after a burnt out Beauty body is found on a train in the middle of rush hour with no explanation for it, the two detectives wind up chasing leads as the CDC sweeps in and threatens to take the case from under their noses. From the start, it’s obvious: the death of the woman on the train has to be directly related to her Beauty infection. Finally in that issue, the disease that has made half of the country beautiful has shown its own ugly side and it’s a big deal in part because Detective Vaughn is someone that has been infected.

One of the things that I don’t talk about very much is how much I love a good government cover-up in fiction. I am a major conspiracy theorist and so the fact that The Beauty #2 opens with the sign that something’s not right in the city as a newscaster (obviously a Beauty) tells his audience about a supposed electrical fire that killed our dead Beauty from the previous issue.

Whether they’re doing it to keep details on the low or to stop everyone from panicking, a cover-up’s a cover-up and this one gets blown wide open on the next page.

The newscaster starts coughing blood and then WHAM – His head erupts into flame on live television.

It’s all that the cops in the station can talk about and as Det. Vaughn starts looking around for her missing partner, Det. Foster comes in and shakes the hell out of her composure. Her reaction to his infection is just as intense as his and she rushes him out of the room before anyone else notices him and loses their shit as well.

(One thing that it legit took me a month to realize though is that if Foster caught The Beauty from his wife… Well Janna has to be cheating on him right? Which is incredibly messed up. Of course, we’re too early in the series to get concrete answers. But then – do we really need them for this?)

I suspected that something was shady about The Beauty and this issue gets us some clarity on the situation. We’re introduced to Senator Robeson who announces that “over two hundred million Americans have The Beauty and every one of them is going to die,” as he looks out at the city from his office.

And the CDC lady from the first issue is in his pocket. Deep in his pocket. Not only are they well aware of what’s going on in the US, they’re planning to profit from it because that’s what asshole villains do. The only thing standing in their way is how many people are dying and how this newscaster guy died in the public view.

I have thoughts about the whole “STD that makes people pretty” and manufactured oppression thanks to some scenes with what’s probably going to be the series’ big bad.

There’s something about the set up that makes me a bit uncomfortable in a bad way but honestly I think I’m going to let the series show me where it’s going before I write that particular blog post. I like The Beauty issue #2 because it gives us more of the puzzle pieces and fleshes out the characters besides. I can’t wait to see where Haun and Hurley go with this book because it seems like it’s just going to get more and more messed up as time goes on.

If you’re interested in horror, science fiction, and police procedurals then The Beauty might be up your alley. Consider checking it out!