What Fandom Racism Looks Like: Only 33 Words in a Trailer 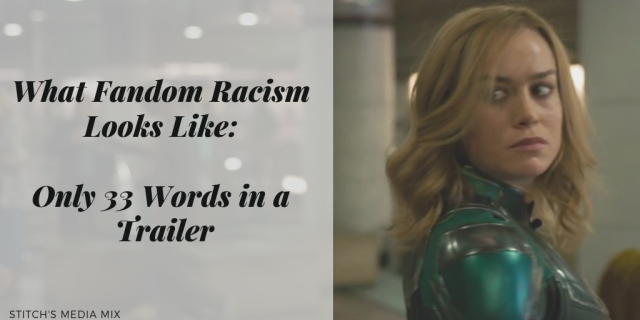 Today, I saw a tweet about said trailer from Shakesville.com’s Melissa McEwan from the night before that reminded me that when it comes to feminism and fandom, people of color are always stepped over on the path to (white) female empowerment. 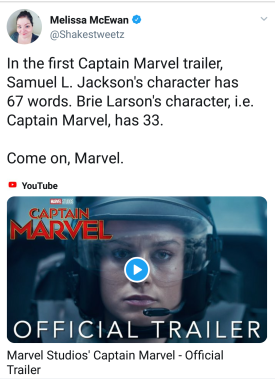 It reminded me of a bunch of different brushes I’ve had with White Feminism ™ in fandom – from Maggie Stiefvater’s beef with the The Force Awakens fandom apparently focusing more on Finn and Poe than Rey, to Anne Theriault’s desire to keep Uhura “Strong and Single” in the Star Trek reboot films, and the Star Wars “Dude Free” edit of The Last Jedi that not only cut out Finn and Poe but… all of the Tico sisters’ screen time in the name of feminist satire.

The one connection between these three incidents and McEwan’s tweet is that in all four of these situations, white women decided that characters of color – three Black characters as standouts – were less important and less empowering for them. The views of fans of color didn’t come into play initially and the feminism on display was far from inclusive towards fans or characters of color.

Stiefvater couldn’t see that fans of color were excited about Finn and Poe, two men of color, for being “firsts” in the genre – Finn as the first Black male lead in a Star Wars film and Poe as a Latino character treated as a major supporting character. She framed it as fans focusing on “the mens” and not-so-subtly implied that women were failing their gender/being anti-feminist with their interest in Finn and Poe.

Theriault straight up shared her yearning for Uhura to return to the good ole days when she was a strong Black woman that didn’t need a man, misrepresenting Uhura’s characterization across the rebooted Trek films to portray her as less independent and focusing only on Spock. Her comments ignored the fact that the reason Uhura was “strong and single” in the sixties was because… anti-black racism in that time period literally kept her from being developed and being in any romantic relationships.

As for the “Dude Free” edit of The Last Jedi? In clapping back against an MRA cut of the film that excised all of the women from the film, the anonymous creator also cut out every single character of color with significance to the plot.

Not only did she lump Poe and Finn in with all of the white male characters, but in cutting them out of the film, she cut Rose and Paige Tico from the film because their scenes were linked with Finn and Poe’s respective plot points. Leaving The Last Jedi “Dude Free” cut as a film revolving around white women alone.

Hell, did y’all see how the Agent Carter fandom demanded that WOC support a show where we weren’t even vaguely represented – all in the name of feminism – and then blame us for the show doing poorly in its second season? (Or, Tamora Pierce wading in with a totally wrong and racist interjection about 1940s New York must have looked like and what Black people would’ve done in that time period. Because I’m still mad about that whole mess and it’s been years.)

In fandom, White Feminist™ hot takes like the ones I’ve referenced implicitly or explicitly Other women of color in fandom. They ask us to choose between the rare handful of characters in Western media that represent us as people of color and the white women we share a gender with.

They imply (or just flat out say) that the representation provided by white heroines in these live-action properties – like Jodie Whitaker’s take on the Doctor, Captain Marvel, Agent Carter, Wonder Woman, and Jessica Jones – is fit and fine representation for all women.

We’re told that we should be focusing on making sure these properties thrive.

We’re told that we should be grateful.

We’re told that we need to “just wait our turn” and be patient about wanting female characters of color who are something other than a sidekick or a villain.

We’re told that we should just “stop pitting women against each other”.

All in the name of (white) feminism.

The thing about McEwan’s tweet that frustrates me, is that having people of color in sidekick or supporting roles isn’t even enough for White Feminism™. She sat there and counted the amount of words that Nick Fury, the narrator, spoke and compared them to what Captain Marvel got in order to present the Marvel as what –

Somehow not feminist enough even though one of Nick Fury’s main roles in the MCU has been to introduce us to the big heroes getting their movies for the first time?

Captain Marvel only gets 33 words to Nick Fury’s 67, but none of the actresses of color who show up in the trailer say anything.

McEwan zooms on past the connections made in previous MCU films – where Nick Fury again is who pulls heroes into the Avenger and organizes them – and dismisses him as a nameless guy character, diminishing his importance as the thread that pulls Captain Marvel into the MCU and as a character in his own right.

McEwan’s take on the Captain Marvel trailer isn’t intersectional or nuanced in the slightest and that’s why it’s so dang upsetting to see.

Think about the optics of a white woman complaining that a Black man has too many lines in a teaser trailer for a movie where he’s probably going to be a white woman’s sidekick. Think about how the female characters of color in this film will probably only have minor roles as support for Captain Marvel and how, if they die, women of color who protest will be accused of “something something, being just as bad as the MRAs”.

White Feminism ™in fandom looks like zeroing in on Nick Fury’s 67 words in the Captain Marvel trailer as a red flag for the film’s feminism. It looks like not saying a thing about how neither actress of color in the trailer has a single line It’s acting as if Nick Fury getting 67 words of dialogue in a teaser trailer after basically being ignored for several of the MCU’s past films – he wasn’t even in Black Panther, y’all – takes something away from Captain Marvel as a character or film.

White Feminism™ in fandom looks like it always does… petty, self-absorbed, and pretty darn racist for no reason whatsoever.

Zeenah writes about comics, nerd history, and ridiculous romance novels when not working frantically on her first collection of short stories and complaining about stuff. One day, she'll settle down and write that novel.
View all posts by Zeenah →
This entry was posted in What Fandom Racism Looks Like and tagged Captain Marvel, fandom racism, nick fury, white feminism. Bookmark the permalink.

7 Responses to What Fandom Racism Looks Like: Only 33 Words in a Trailer