Obviously, this post has spoilers for Star Wars: The Force Awakens. And some of them might be above the cut. 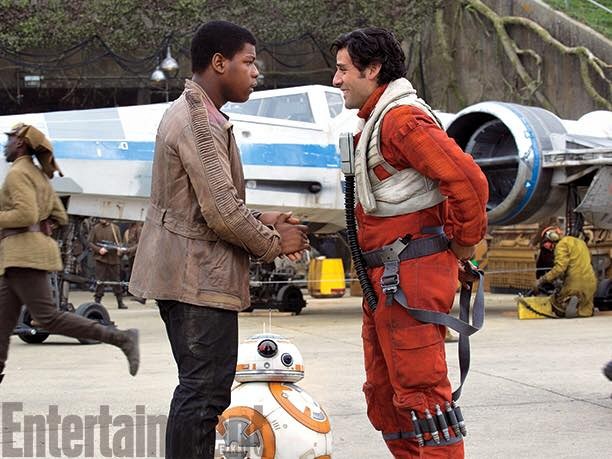 Earlier yesterday, The Raven Cycle author Maggie Stiefvater took to tumblr (in a response to a message sent from one of her fans) to announce that she had beef with the Star Wars fandom in the wake of Episode VII: The Force Awakens.

Why does she have an issue with the fandom?

Could it be because fandom insists on shipping Rey with Kylo Ren despite everything he did to her?

Could it be because of racist AUs like the ‘segregation’ AU someone saw floating around?

Or could it be because clueless and offensive people fandom have decided that Finn is the ultimate misogynist for – wait for it – daring to hold Rey’s hand at some point in the film?

Maggie has beef with the Star Wars fandom because they’re focusing too much on Poe Dameron and Finn.

You know, the first men of color to ever be main characters in a Star Wars film.

Instead of basking in that beautiful POC rep (or, if she must complain, point out that we still haven’t had a woman of color with a significant presence in the film series on that same level), she’s steamed because fandom isn’t focusing as much on Rey as they are on Finn and Poe.

From her actual blog (the link may be down by the time you read this):

The reason why I’m frustrated with much of the dialog I’ve seen about TFA online is because we have, for the first time, been given a really incredible heroine who does not fall into the Tomb Raider-leather-pants-wearing-mentor-to-the-ordinary-dude mold, and yet, all of these folks I followed were posting 90% Poe/Finn gifs and fanart and screenshots, 10% links to academic articles about how great it was that Rey existed.

Yes, you read that right: she’s mad because the white female character supposedly isn’t getting as much interest from fandom as two men of color. Because that’s apparently a thing that happens all the time in fandom and media journalism.

In fact, fandom and media journalism tend to put white characters (of every gender) above characters of color regardless of how close any of them are. The Star Wars fandom by and large is going against established and harmful fandom shipping tropes by focusing on Finn, Poe, and their relationship.

And they’re doing it all while incorporating Rey into the relationship!

FinnReyPoe is an actual triad ship. They’re the OT3 that needs to be. They are, in a word, fantastic. And they’re all over my dashboard and timeline.

They’re probably all over yours too.

Somehow, they weren’t all over Maggie S’s.

(Which says a lot more about her dashboard and Twitter feed than it does the actual fandom experience.)

Here’s the thing: I get being absolutely pissed about how predominantly white slash ships tend to dominate the shipping conversation at the expense of female characters and characters of color. I even wrote a post about it called “Slash Shipping, Pseudo-Progressivism, and Reinforcing Patriarchal Standards in Fandom“. The post talks about how fandom constantly erases female characters and characters of color so that slash ships centering white dudes can take the lead.

I am constantly talking about how fandom erases women and people of color in media.

However, that’s not what’s happening in the majority of the The Force Awakens fandom. For once, fandom is being awesome (mostly) about focusing on men of color and powerful women and they’re doing it at the same time.

But okay, let’s talk about something that I really think needs to be addressed about Maggie S’ commentary: the idea that we owe it to ourselves as fans (and fans of color) to put white woman and white women getting representation above characters of color getting the same response.

In her first response, she basically says that fandom is suffering from a gender bias that’s keeping fans from recognizing Rey’s awesomeness. In her second response to another fan, she basically beseeches us to give Rey the same amount of interest as Poe and Finn get and asks fandom to note their biases.

And if fandom and the media were erasing or ignoring Rey and Daisy Ridley in favor of this slash ship (they’re not), that’d be a big problem.

I don’t like that Maggie S can’t see how huge this is and how for once, fandom isn’t erasing characters of color in favor of anything or anyone.

Maggie S is essentially asking fandom and fans to focus more on the main white female character (something they’re already doing) rather than looking at the way that the film gives significant screentime to men of color and how fandom, rather than erasing the significance of the relationship in order to focus on the vaguely attractive white villain, is embracing them. She’s not looking at the history of film and how white women have always been boosted above people of color (in film and otherwise).

She’s essentially giving fandom a choice: Choose (white)feminism or be a part of gender bias.

Either fans (some of whom are people of color and women of color at that) have to choose between liking yet another white female action hero (because we do get white women represented in action films at a far greater rate people of color do) and stanning for purely positive POC rep?

There’s no acknowledgment of intersectionality or history or precedent here.

How does that even make sense?

And Maggie S says that the accounts she unfollowed (and who are apparently representative of the fandom): “twisted themselves in circles to defend why it was fine to talk about and post about the men more. Acrobatics like that normally place you as an Olympic hopeful.”

That’s a little messed up isn’t it?

Because celebrating and defending your right to be super excited about two men of color as significant characters in a film franchise that has historically been all white is part and parcel of some sort of mental acrobatics. Because the only characters that deserve to be defended are white women.

I’m sure that’s not what Maggie S meant. Really.

But that’s how it’s come across to fans of color (and otherwise) who are seeing her essentially try to shame them for seemingly not identifying with or fawning over Rey. Meanwhile, she’s not a part of the collective fandom community to see how fandom regularly mistreats characters and fans of color.

The pecking order in fandom is the same as it is in Hollywood:

That’s the order we’re slotted into.

White women have always gotten more interest from fandom and media. Sure, it’s not as much as one or both halves of your fandom’s favorite white dude slash ship, but it’s decidedly more interest than most characters of color in the same fandom get.

In his fandom specifically no one is cutting Rey out of anything. She’s getting tons of meta, tons of fan art. She’s frequently written in relationships with multiple characters outside of the OT3. Meanwhile, didn’t Finn (the second lead) get cut out of at least one country’s The Force Awakens poster?

I doubt you’ll read this (or if you’ll make it this far if you do), but Maggie S, you can’t look at the The Force Awakens fandom and assume that they’re just like every other fandom.

You can’t assume that you, as a white woman, have the right to come into a fandom that’s actually being quite lovely about female characters and male characters of color and decide that they’re essentially falling in line with the patriarchy for appearing not to fawn all over white womanhood.

This is not that fandom.

Instead of telling fandom to address their supposed gender biases, how about checking your own racial biases because you got annoyed that the people you’re following and the news sites you came across (supposedly) focused more on the absolutely awesome representation of a positive and awesome relationship between Poe and Finn, the only main men of color in Star Wars, than Rey.