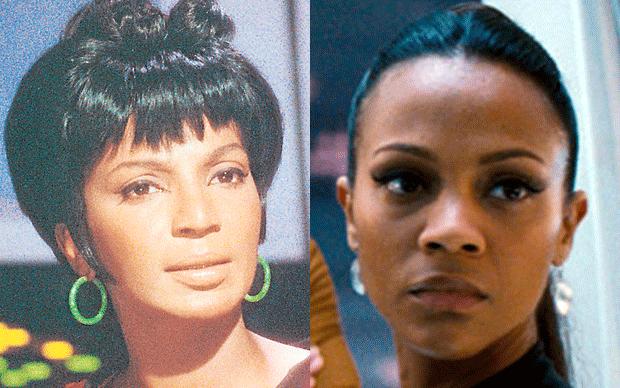 Image taken from the Telegraph photo gallery “Star Trek cast past and present“.

I need White Feminism (which exists to benefit whiteness and white womanhood) to stop telling me that Black female characters are better off when they’re single.

I need White Feminists ™ in fandom to stop pretending that they’re protecting or promoting Iris West/Nyota Uhura/Abbie Mills/Eve Moneypenny by wanting these Black female characters to stay single and “strong” forever, pushing them away from the potential of canon romances with white male characters.

A day or so ago, writer Anne Thériault saw Star Trek: Beyond and left with a major bone to pick with the franchise: Uhura and Spock’s relationship. She said that Uhura’s plot revolved around Spock and their relationship and that she was framed as “just” Spock’s partner. And then, she tweeted the following comment that was so infuriating that I had to respond to it (both of our respective tweet threads can be reached from this link):

There are so many problems with everything Thériault mentioned (and, after I pointed them out to her she seemed open to learning), but let’s start with a look at how, in a White Feminist ™ point of view, Uhura being single, strong, and #foreveralone is a point of pride for them.

It’s a #FeministLifeGoal that Uhura was never “bound up” in romantic entanglements.

Except… that’s not how that works.

Uhura was single specifically because the Star Trek show of the sixties was created in a time period of incredible antiblackness. The people watching and creating television shows during the time of the Civil Rights Movement were racist and unashamedly so. The idea of a Black woman in a position of power and framed as desirable – but not hypersexual – was so threatening to them that Uhura was never given same roles and presence as other (white and male) characters.

Moving forward from this, we got Zoe Saldana playing the character in an established relationship with Spock in the current series.

From the moment that fandom saw that she was in this relationship, the claws came out.

Fans called her “U-whore-a” as a catchy name. (They still do this, by the way!)

They wrote stories with her being “taken down a peg” – a worryingly familiar phrase and focus that happens to fall on Black women and female characters that are seen as “mouthy”, “bitchy” or “overconfident”.

Then came the concern trolling.

Uhura being in a relationship with Spock was a slap in the face to Nichelle Nichols’ portrayal of the character because it “reduced” the character to a love interest role. Never mind that Nichols herself had mentioned that Spock and Uhura seemed like they had a connection in ToS that could have been a romantic one.

No, the fear that Uhura’s character (one that non-black members of fandom constantly and consistently erased across the decades unless they needed someone to hook up Spock and Kirk or serve as a foil for one member of the pairing) really had nothing to do with protecting Uhura and everything to do with not wanting Spock to be with a Black woman.

To combat the idea that Uhura’s character is lessened by her relationship with Spock in the current film series, here’s a quote from my post Black Ladies Deserve Love Too: Lupita Nyong’o, Concern Trolling, and White Feminism:

Playing a love interest is only reductive from a White Feminist ™ point of view that doesn’t take into consideration how media handles (or rather, mishandles) Black women in and out of relationships. White women have only recently graduated to being seen as capable of helming their own franchises and being in comedy so they assume that everyone else has that access to the roles and positions that they do.

And that’s just not true.

Black women and actresses just don’t get to be the love interest, the princess, or hell – the queen. We don’t have a wider range of roles that we’re cast in wherein being asked to play a love interest is offensive because there are so many other rooms for us to play.

Even if Uhura was “just” Spock’s partner and didn’t kick ass across the galaxy while being a perfect diplomat, that would still be significant because Black women are never the damsels. Never the queens. Never the people that men fight for.

Many of these same fans who claim that Uhura being with Spock reduced her character also said that it was homophobic to place Uhura and Spock in a relationship because the film franchise could’ve should’ve made Spock/Kirk canon. Because you know… it’s all about queer representation right?

Never mind that Uhura and Spock being in a relationship only precludes both characters being queer if you don’t believe that bi/pan/poly -sexuality exist.

They said that making Uhura Spock’s coworker while she’s in a relationship with him was unprofessional and as far from feminist as you can get. Under the guise of protecting her from her canon, fandom tore her characterization apart, making up things when they weren’t outright misinterpreting the canon information.

They claim that Uhura doesn’t fight in the new series, that the only significant interactions she has in any of the Star Trek films is with Spock.

They ignore that in Beyond at least (I haven’t seen Into Darkness and I never will), Uhura has a significant role and without her, we wouldn’t know the purpose of Krall’s weapon or his identity. We wouldn’t have had several poignant moments about teamwork and sacrifice.

As for the claim of her character revolving around her relationship with Spock (the way Thériault and many other critical fans of the series do), that’s not even remotely true.

I’ve seen the movie twice and both times, one thing that stood out to me was how Uhura was in so many scenes that didn’t even remotely bring up her relationship.

Conversely, Spock had some serious conflict going on about their relationship and how it was fracturing due to his internalized fears and worries about continuing the Vulcan race – fears that he at no point mentioned telling Uhura so if you see someone bringing that up as a way to problematize the relationship, they are absolutely reading into missing text.

All of these things fandom has done continue to piss me off, but the concern trolling is the kicker for me.

Because these fans don’t actually care about her.

It’s not about protecting Uhura from a bad canon or protesting a lack of agency. It’s about protecting fandom’s white faves from her – most likely because fandom wants the fandom faves to be together.

And this isn’t something that just popped out of nowhere.

Every time a popular franchise introduces a Black female character who just happens to be in a relationship with or flirting with one of fandom’s white dude faves, fandom crawls out of the woodwork to inform us that these characters are all strong Black women that don’t need a man.

They crawl out to tell us that shipping these Black characters with anyone is wrong and problematic because we’re reducing her strength and agency by deciding that they deserve to be loved.

As I said in my fandom essay post on the techniques of erasure:

Automatically, when you go on and on about how x is a “strong Black/Chinese/Puerto Rican person that doesn’t need a significant other” you are not championing asexuals. You are not being progressive. What you are doing is erasing the fact that POC — and especially black women — are typed as unwanted, ugly, and less desirable for romance.

Fans don’t see comments praising Black female characters for their strength in singleness as erasure or propagating stereotypes. They think that because white women and white female characters have had a pretty decent access to roles that aren’t romantic, that Black women should be at that point too.

But that’s not how it works.

Let’s get something straight here: As a strong, single, black woman (well… femme) in fandom, I don’t need non-Black members of fandom to shit all over a powerful Black woman specifically because she’s in a relationship and they claim to see it as diminishing.

Do you know what I actually need?

I need non-black women to stop deciding that Black women can’t have power if they’re in relationships as if strength wanes when we’re in love. I need non-black people in general to stop pulling out that tired “x character is a strong Black woman who don’t need a man” argument as if it’s anything other than racist and dismissive.

And I really need non-black members of fandom to stop acting as if their sudden care for the safety and agency of Black women in film (when said Black women are in relationships with or have mutual attraction to fandom’s white dude favorites) comes from anything other than a place of immense privilege and a desire to have their white faves distanced from the Black women they’re close to in canon.

Zina writes about comics, nerd history, and ridiculous romance novels when not working frantically on her first collection of short stories and complaining about stuff. One day, she'll settle down and write that novel.
View all posts by Zeenah →
This entry was posted in Fandom, Rants and tagged fandom racism, feminism, Nyota Uhura, shipping culture, star trek, star trek beyond, white feminism. Bookmark the permalink.