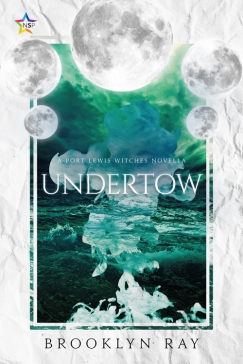 Now, I seriously enjoyed my introduction to Ray’s writing in Darkling and thought it was a fantastic read, but Undertow is even better.

For one thing, Undertow introduces us to some more of the mysteries present in Port Lewis’s witch community – including a conflict between demons that shapes their lives.

Undertow is set shortly after Darkling, the novella that introduced us to necromancer Ryder Lewellyn and his friend-turned-boyfriend, Liam Montgomery, a witch whose magical affinity tends towards water. Liam is the focus of this novella and I think he’s an incredibly solid protagonist, fleshed out even more than he was in the previous novella.

After hearing a kelpie’s cry cut through the night, Liam becomes convinced that his death is imminent. His fears aren’t helped by the continuing tension within their circle left over from the previous novella’s reveal about Ryder’s abilities and his death and rebirth (with the help of the demon Belial). The novella is full of incredible reveals about Liam’s family and the secrets they’ve been keeping for generations – secrets that are coming back to bite Liam and Ryder right on their butts.

While the secret is surprising, what Liam and Ryder do once they know it? That’ll leave y’all reeling.

Undertow is significantly darker than the previous novella in the series and Ray’s grasp of darkness as a thing within witches is one of my favorite aspects of the novella. I think that Ray’s use of darkness and the way that they write Liam and Ryder embracing or struggling with their journey into darkness ratchets up the stakes even higher as Ray develops the world of the Port Lewis witches further.

This book left me on the edge of my seat, biting at my fingernails because I was just so ready for things to go from bad to “oh glob, everything’s on fire”. Ray does an excellent job of widening their world(building) in Undertow, weaving a stellar story that increases the stakes and deepening reader interest in their characters. Across Undertow, I found myself feeling anxious, excited, and, once or twice, struck by a persistent dread because of the perfectly timed tension.

Darkling was all about Ryder embracing who he was and what he’s meant to be. Undertow? Is all about Liam figuring out who he is, what his family has been hiding from him, and how it’s going to impact his future with Ryder.

Undertow is perfect for fans of dark (but still very tender) urban fantasy/paranormal romance! If you liked the first book, you’ll definitely like this one. And if you haven’t read Darkling yet? Go change that immediately because the third book comes out next year and I need y’all to join me in screaming about it once it’s out!

Content Warnings/Notes:  consensual bloodplay during sex, some violence, relatively graphic descriptions/depictions of gore and death
Are There Sex Scenes/Sexual Content?:  Yes (between Liam and Ryder and they’re where the “consensual bloodplay during sex” notes come from)
What I Liked Most About It:  the introduction of kelpies, all of the worldbuilding surrounding demonic factions (and the appearance of a certain water-based demon), Christy’s everything, Ray’s use of violence in the novella, the introduction of sea/water-based supernatural beings, the (still-scorching) sex scenes between Liam and Ryder
What I Could’ve Done Without: Tyler is still so stressful and I need him to chill because he’s making many of the circle interactions super frustrating to read
Where Y’all Can Buy It:  Amazon | Ninestar Press
Author’s Website/Social Media: Brooklyn Ray @ Twitter | Tumblr
Rating: Highly Recommended