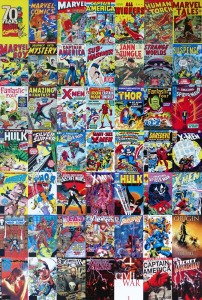 One of the three graduate courses I’m taking is a class called “The Author in their Time/s”. It’s a class that looks at authors writing fiction about a period in history as they lived in said period. This specific class, taught by a professor that reminds me a bit of Heathcliffe (the cat, not the Wuthering Heights dude), is about the Cold War.

A huge issue that I’ve been having with academia – even before the Literature degree in-progress – is that a lot of the people who teach my classes or who are in said classes have no idea that comic books could even remotely fall underneath the banner of respectable literature. We learn about the same white guys and gals and the same types of Literature on end until it’s all but beaten into us that academia only cares about certain types of narratives.

So here I am in a class about the Cold War and materials written directly before, during, or directly after it and yet we don’t do more than talk briefly about Ian Fleming’s experiences and fears creating James Bond. We don’t spend any time looking at how Cold War communist anxiety informed the creation of characters like Iron Man and Black Widow while influencing the type of villains that heroes like Batman came up against.

Comic books, as always, are a complete non-issue outside of programs that don’t explicitly focus on comic books as both pop culture and literature.

I always wonder if these professors who refuse to contemplate the idea of the comic book as a subgenre of capital-L Literature don’t understand what a wealth of information comics possess when it comes to history. I look at comics, especially between 1939 and the 1980s, as primary source documents, nerds trying to understand the world around them the best that they can with the medium they know best.

They also seem to know nothing about comic books – both from historical and literary standpoints.

From confused looks when I proposed my thesis ideas (all of which revolve around comics or comic book based media) to the fact that when I write a paper on comics, I have to tack on pages of foregrounding for the uninitiated, my grad-school writing has been a wild ride of people having absolutely no idea what I’m doing or what I want to do.

Most of the time though, it’s a bit ridiculous that people who grew up reading comics can’t see the benefit in studying them now.

Stitch writes about what needs to be written.
View all posts by Stitch →
This entry was posted in Stitch Offline, Totally Anecdotal and tagged grad school, literature. Bookmark the permalink.
Loading Comments...