Bendis, Opportunism, and Bad Judgment Calls in a Terrible Time 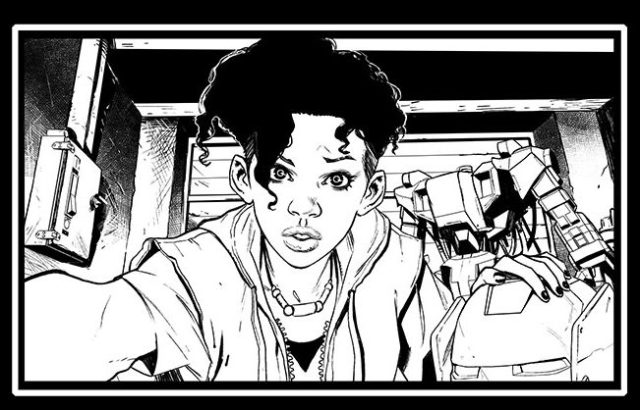 With people all over the world reeling from the fact of a Trump presidency, Bendis decided that there was no time but the present to do one thing: ply his comic, the upcoming Invincible Iron-Man #2, as a distant distraction.

i know, i know…. some of you are still dizzy.  i am too.  i’m probably asleep when you read this but EVENTUALLY you’ll want some distraction so here’s this book we’re really proud of…

call your local store to pre order your copy today!

I mean… I get that Bendis wants to do his part to help people, but this was not the time to push his comic that doesn’t even come out for a month. It doesn’t feel like a legitimate attempt to heal people – as it doesn’t come hand in hand with a promise to donate proceeds to the ACLU or the NAACAP or any organization for the advancement and protection of human rights.

It feels like an attempt to capitalize on the pain and fear that we (all marginalized comic fans but Black women especially because we are expected to support this comic) feel when faced with a future that we might not survive because a bigoted Antisemitic cheese puff is now President-elect and his VP pick literally HATES women and queer people.

Yeah, all Bendis wanted to do was help.

All he wanted to do was entertain us in this traumatic time.

He’s a Jewish man and therefore not at all protected from the shitstorm to come. His  two Black daughters are growing up in a world that they probably know hates them.

His heart is coming from a good place.

I get it. I absolutely get it. I even understand the urge to draw attention to a (superficially) diverse book, today of all days.

But I feel like he was wrong to press us to buy his comic today.

Today was not the day for him to put himself forward and say “hey, preorder my work [about a Black female character by a company that’s only hired one Black woman to write for them on an ongoing in seventy-five years]”.

Today, Bendis should have considered promoting other people whose voices are at risk of being permanently silenced. There are some amazing posts by people in and out of the comic book community that are being shared across thousands of timelines. There are thousands of narratives about what this future might bring and about how we can work to change it.

Instead, he asked people on tumblr to pre-order his comic as if that comic is going to help make things better. That comic. One where there are no Black women working on a comic about a Black teenage girl. Where he kills off her one Black best friend and her actual freaking father via ~gang violence~ to give her a Batman-esque backstory in the first issue.

Look, y’all should already know how I feel about Bendis.

I think that when it comes to Black characters, the fact that he has Black daughters makes him feel as though that gives him access to Blackness as something other than an ally and observer. I think that the way he writes Black characters lacks a necessary authenticity and that his grasp of Blackness is secondhand and shallow. I don’t think that he’s the right choice to write Riri and I haven’t thought that he was a good choice to write Miles in a long time.

Now was not the time to tell people to buy his comic.

Not when Bendis, a man with absolutely no experience being Black, previously ignored the impact that Black characters have had on people of color – especially Black people – in order to basically make a comment about special snowflakes and the tumblr crowd. He used Miles as a mouthpiece to make fun of people excited to have a Brown kid as Spider-Man and that will never be anything other than nasty and mean-spirited.

People were hurt by this and the mentality that the Spider-Man that looks like a lot of kids in our country doesn’t give a damn about how important his existence is to little Black and Brown kids hurts.

But more than that, Bendis writes Miles Morales as largely out of touch with and adrift from his identity.

As I say in my post “The Reality of Bendis Writing Blackness“:

Bendis writes Miles being unaware of what it means to be the “Black Spider-Man” when people of color in public spheres talk constantly about how they strive to provide representation to children like them who grew up without seeing themselves in movies or shows.

In his books Miles is adrift, removed from Blackness and his Puerto-Rican-ness due to being orphaned and leaving his universe. He doesn’t interact with or exhibit Blackness in any meaningful way besides being dark skinned. Miles exists in whiteness that’s nearly unbroken except for his friendship with Ganke and occasional hangouts with Nick Fury.

Bendis wrote Miles cut apart from his heritage. [4] His friends are mainly white.  Our Afro-Latino Spider-Man was shown to balk at the idea of people getting excited over his heritage and his brownness. This is the canon Bendis created.

That’s so unacceptable that I could just scream.

And I feel so strongly that Riri is on that same road because the way that he’s writing Riri in Invincible Iron Man #1 has actual problems with how Blackness and Black people are portrayed[1].

That’s why I don’t feel like it’s right for Bendis to be out here pushing Invincible Iron Man on today of all days. It’s not an #ownvoices title or an actual diverse work that takes the time to craft a portrayal of Blackness and Black girlhood that is uniquely positive.

It’s a story that immediately builds off of stereotypical perceptions of Blackness and revolves around a Black character rising and escaping an inner-city life. There are issues there.

It’s a series that doesn’t have any Black women on its creative team or editorial team.

How am I, a Black femme, supposed to look to such a book for even a smidge of help towards the healing process when Black women aren’t even typically seen as capable of telling our own stories in comics? When Marvel’s go-to guy for writing Black characters isn’t Black?

I don’t see how offering Riri’s book up as a balm is going to help.

(And here’s a point I’d like to make that isn’t necessarily relevant: My favorite Marvel comic, Moon Girl and Devil Dinosaur has its own problems, but it also has a diverse creative team with Natacha Bustos, a Black artist, and colorist Tamra Bonvillain, who is a trans woman [2]. Looking between that series’ first issue and Invincible Iron Man‘s first issue, it’s clearly a better choice to empower young Black girls and Black women on several different avenues[3].

I like the idea of Riri Williams, I do. She has a lot of potential as a character. But I’d feel a lot more comfortable with a Black woman at the helm, an intersectional feminist who wouldn’t divorce Blackness from her character the way Bendis did with Miles.)

[1] I’ll probably make a better post reviewing the comic once I’m not swamped with work, but I have issues beyond the fridging of her father and her best friend as well as how her parents are portrayed at the start of the book.

[2] In the original post, I erased/ignored the identities of two of the women working on Moon Girl and Devil Dinosaur. That was wrong of me and I apologize for perpetuating my own form of erasure. Thanks to a kind reader, the post has been updated with this segment being rewritten.

[3] Black people aren’t a monolith and neither is there a uniform “Black experience” but Invincible Iron Man‘s first issue reads like a white image of a Black experience. It doesn’t feel authentic and it feels very “this is my outsider experience with your people and so this is what I’m writing about you” which is in its own way alienating and dehumanizing.

[4] Miles is not an orphan. This is in part because in the main continuity now, both of his parents are alive as well as because in the previous continuity, only his mother was killed off.  This really insightful response to my post points out that:

brian michael bendis kills miles’s mother in the original ultimate run, not his father, but makes his black father out like some sort of reformed criminal only to make him a former shield agent in main continuity (where his mother is alive as of my last read). the real problem is that bendis inserts white male characters (tony stark, peter parker) into miles’s life as if he does not already have a black father

Zina writes about comics, nerd history, and ridiculous romance novels when not working frantically on her first collection of short stories and complaining about stuff. One day, she'll settle down and write that novel.
View all posts by Zeenah →
This entry was posted in Marvel Comics, Rants and tagged brian michael bendis, Marvel, race and representation, racebending, Riri Williams, Spider-Man, us politics. Bookmark the permalink.

2 Responses to Bendis, Opportunism, and Bad Judgment Calls in a Terrible Time