Nothing in this review should spoil the film. I talk about stuff made explicit (or implied) in the films many trailers, tv spots, and press releases/interviews. 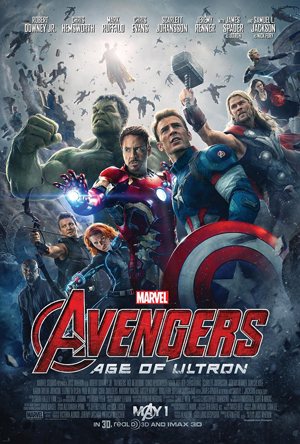 At the end of the credits, there’s the tagline “A Joss Whedon Film”.

I rolled my eyes so hard that they just about fell out of my head.

The thing about Joss Whedon is that when he’s directed anything, you know it. You fucking know it. We make fun of directors like Michael Bay for his use of lens flare and the Coppola’s for their allergy to casting people of color as main characters, but okay can we at least agree that Joss Whedon movies are so imbued by Whedonisms that you couldn’t possibly mistake his work for anyone else’s.

It’s like two and a half hours of Joss Whedon at his peak and that’s not always a good thing. Joss is a very trope-dependent director and writer and it shows in this. AOU was a love letter to everything that he did over and over in Buffy, in Dollhouse, in Angel, and in Firefly. He’s super repetitive when you get down to it and if you’ve seen one major Whedon property before AOU, chances are high that if/when you watch AOU it will be predictable to you.

There are several tropes that Whedon uses (and abuses) throughout the context of AOU. He’s got this hard-on for broken women fixing savage beasts/the unknown by being cute and broken in some way. He’s still fixated on this image of Captain America/Steve as this goody-goody, All-American poster boy for morals and squeaky clean everything. And he still thinks that the sun shines out of Tony Stark’s ass.

In many ways, AOU is better than the first Avenger’s film.

In many ways, it’s worse.

It doesn’t feel as sequel-y as the first one. Where the first Avengers film felt like the sequel to a bunch of movies that Whedon hadn’t watched, you can sort of see that there’s a scant bit more care in how he crafted the characters. Aside from this weird preoccupation with making Steve out to be an actual twelve year old boy scout (there was a recurring joke that started early on that was cute at first but got annoying real fast because Whedon writes the most ridiculously judgy Steve).

You know how sometimes you can tell when someone has a favorite child and it’s so obvious that it makes you uncomfortable? That’s Whedon with Tony and Ultron. You can tell who Whedon favors by the amount of quips that they deliver and oh boy do Tony and Ultron deliver a shit ton of quips. Now I don’t like Robert Downey Jr or Tony Stark so I wasn’t too pleased with the whole thing where he was on freaking screen, but okay James Spader manages to be charming, menacing, and weirdly adorable at the weirdest times. Between the two of them and Hawkeye (who got a few good quips but nothing really astounding), they had the brunt of the hero-led dialogue.

As someone who likes well… nearly anyone else, I was mildly displeased.

I… don’t really care about half of the characters that got significant screen time and when my fan faves were onscreen, they kind of didn’t read as wholly recognizable. I don’t read the same things into Steve, Nat, Rhodey, and Sam as Whedon does and there are little things that just stuck in my craw and made my skin crawl.

And don’t get me started on the Maximoff twins. Don’t. All I can say about them that isn’t a huge honking spoiler is that I am going to get my butt on writing some serious fix-it fan fiction once I get some spare time because Whedon did them so dirty. I can’t go into details without serious spoilers just by virtue of nitpicking but oh boy once I do my second and third rewatches of the film and give my peeps a week or so to all see it, it is going to be on!

Now I have spent a fair bit of time talking about stuff I didn’t really enjoy but okay here’s some non-specific stuff that I did like about AOU:

Natasha looked very cute through the whole movie. Like there were a lot of close-ups on her face and it was kind of hard to ignore how stunning ScarJo is.

Whedon’s Thor is actually spot on. Out of the core Avengers team on the ground, I feel as if he’s the one that got the most connection between his Avengers role and the solo movies for his character. There wasn’t a huge disconnect between how Whedon thinks he is and how he actually is and sadly, that was surprising. At no point with Thor did I roll my eyes when he was onscreen because Whedon was actually on point with him.

The fight scenes were aces. I really enjoy people punching other people and there was a lot of that. There’s a lot of well… body poetry, kind of? It’s a superhero movie so it has to feel like a superhero comic. A lot of movies kind of miss out on that because they’re so busy trying to legitimize the genre in relation to artsy fartsy films or whatever Jason Statham is in this month, that they lose the fun and the fight isn’t familiar or worthwhile.

I have thoughts, further thoughts at any rate, but I’ll wrap it up right quick. AOU was very decent. If you turn your brain off and watch it without critiquing it, it’s probably fabulous. I liked it better than I did the first film though because the characters were fully formed and not fully Joss’d. It wasn’t like we were in his sandbox dealing with him fleshing out Steve and Bruce and Thor who only had one movie out at the most. We’re at a point where they exist outside of what he’s created in the MCU and so he can’t run wild with them as much as he wants to.

That definitely made me feel better about the whole experience. (Well that and the Russos directing the next Avengers films because they are supremely capable directors and I enjoy everything that I’ve seen from them. ) I liked the film and my eleven year old niece adored it (the nine year old did not at all but okay I figured) and really the eleven year old’s opinion is the most important!

Now peeps, for those of you that have seen AOU, how did it make you feel? And for everyone else: what are you looking forward to seeing or why haven’t you seen it yet?