I don’t remember who I was having this conversation with (but it was probably someone in the English department because that’s where I keep having these conversations) but the subject of werewolves and their eating habits came up and the person I was talking with was like “okay, but what happens to the raw meat when they turn back human”

And I didn’t even have to think about it.

They’re always werewolves even when two-legged.

Therefore, their stomachs are werewolf stomachs – not human or wolf.

So they can eat anything that humans can eat as well as anything wolves can eat.

I argue for all of the benefits and none of the drawbacks.

Trust me, I’m a werewolf expert. 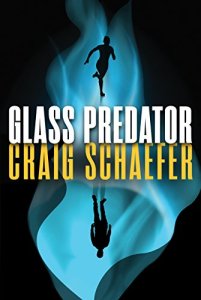 Queerwolf Focus: Technically, Jessie Temple isn’t a typical werewolf, but courtesy of her serial-killing father’s dealings with the King of Wolves, there’s something wolfish in her that takes control every so often despite her attempts at holding her own.

Jessie, a black lesbian and absolute badass, is a secondary character in Schaefer’s dark urban fantasy series. She’s present in all of the books so far, but “her” book, Glass Predator, is an incredible read that gives us a great look at one of the coolest queerwolves in the genre.

END_OF_DOCUMENT_TOKEN_TO_BE_REPLACED

I don’t just adore Space Goat Productions’ Moonlighters series because the talented writer on the book is my pal (and fellow Comics Alliance alumus) Katie Schenkel or because artist Cal Moray is equally talented and that they draw the cutest werewolves I’ve ever seen.

I love it because Moonlighters is basically everything I’ve ever wanted in family friendly urban fantasy.

END_OF_DOCUMENT_TOKEN_TO_BE_REPLACED

Content warnings: This installment of Urban Fantasy 101 contains references to or descriptions of racism, homophobia, heterocentrism, sexual assault, childhood abuse, domestic abuse, other forms of discrimination. There are also tons of footnotes.

Werewolves are everywhere in the urban fantasy genre.

Most major series – film and otherwise – count lycanthropes as a staple creature and always throw in some funky in-world backstory to make the furry beasts fit into their worlds.

There are werewolves in Harry Potter, Buffy the Vampire Slayer and Lost Girl. The Underworld franchise – which is like Romeo and Juliet taking to a logical werewolf-y extreme – had its fifth installment (Underworld: Blood Wars) come out in January 2017.Teen Wolf, MTV’s adaptation of the Michael J. Fox film, is only now wrapping up its final season while the television adaptation of Kelley Armstrong’s Bitten just ended its final season in April 2016.

The paranormal romance genre (the flipside of the more “action oriented” urban fantasy genre where romance is supposedly supposed to be incidental to the plot) is so full of lycanthropy that you can’t shake a stick without hitting a werewolf.

Which makes sense because werewolves are cool. END_OF_DOCUMENT_TOKEN_TO_BE_REPLACED