Note: This essay contains critical references to and some descriptions content in fanworks that is objectionable including underage characters and sexualized/eroticized racism. 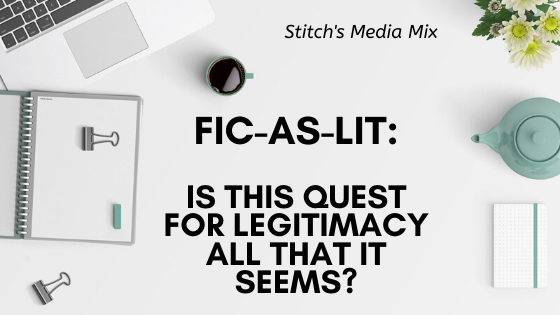 I spent a lot of my time in graduate school arguing that “literature” as a word could encompass entire worlds of media that were consistently dismissed as not being sacred or classical enough.

I found the potential for literature in pretty much everything that had text in it and made a point of challenging the expectations that my classmates had about lit on a regular basis.

So I get that urge to be like “fan fiction should be as valued and as valid as literature” and I even embrace it – up to a point.

And that point comes when you look at the differences between how literature and fanfiction are critiqued. Or rather – how we’re allowed to engage critically with them.

Most people balk at the idea of people being critical of the fan fiction they read or the content that fandom comes out with. No matter how it’s put together, it’s directly opposite fandom’s goals and the experience of fandom to be critical of it in any way.

Meanwhile, people get entire degrees and have whole careers based on literary criticism.

Because taking literature at face value is just something that seems shallow.

But it’s expected of fandom and fan fiction.

And again, I do get it: because fan fiction isn’t mainstream media, we’re told that it impacts a smaller audience than the stuff we see on TV. And applying critical concepts to what we’re told is a tiny audience feels like punching down, right?

There are stories on the AO3 with hundreds of thousands of hits. (There are two stories that I can recall seeing with over a million.)

The most popular stories in a given fandom tend to have tens of thousands of hits and can have readers in the low five digits. Because of how the internet works and who has access to a site like the AO3, more people than ever are reading fanfiction for a massive variety of fandoms. Millions of people read fan fiction these days and it impacts a very real portion of the population of people who read.

Fanfiction isn’t the red-headed stepchild of the internet at this point in time.

But too many fans sure do want to pretend that it is.

With the Hugo Award win for the AO3, fandom is back to pretending that they want fan fiction to viewed as literature and legitimized in the eyes of the wider public. I don’t doubt that many people want fic to be legitimized because of how folks will mock it like it’s not formative for many of us, but let’s be very real here: they don’t want it to be taken as seriously as literature actually and largely is.

They want celebratory works focusing on how empowering fanfiction is for some queer people and some women – not articles unpacking the problematic aspects of what’s popular in these spaces. They want awards for authors and recognition of their work – but not conversations about how many of these authors can and do replicate harmful tropes in their work.

The critical conversations we manage to have about de Sade and Anais Nin despite their fans and value to someone’s literary canon, about transgressive and downright problematic authors – many of whom have written content that wouldn’t be out of place on AO3 once properly tagged – are not conversations we’re actually allowed to have about fic writers or the content they create.

And that’s just within fandom.

The few pieces of content critical of fandom before and after the AO3’s Hugo Award win have been written off or ignored as coming from awful misogynists that hate women exploring their sacred sexuality. The people who’ve talked about how this win will be used to silence critique of fandom (like Dr. Rukmini Pande and myself) were absolutely treated like a threat to fandom instead of as people asking for folks to think just a little bit about what they’re asking to see legitimized.

And let’s be clear here: “if it got an award like this, how can it be a problem/problematic” is not an argument you want to make in a world where multiple genuinely awful humans – sex pests, racists, abusers, and the like – have been nominated for and have won multiple Hugo Awards.

Because awards don’t always have a ton to do with talent and in the case of the science fiction and fantasy community – and its fandom spaces – a lot of what goes into something getting an award is the value its fans give it. Not the value it actually has a well-written/crafted thing.

Award shows are mainly popularity contests and you can tell that in the science fiction and fandom communities – as with fandom – by who gets nominated for awards and who wins them.

The other thing I don’t believe that people understand is that even those Hugo-Winning Authors – or authors that’ve won another award – for their potentially problematic content still get criticized for their work. Being considered literature involves literary criticism but on top of that, all media gets reviews of some sort.

Winning an award doesn’t remove the responsibility to your audience.

Being nominated for an award doesn’t mean that your work is suddenly somehow above reproach.

And I don’t think that folks who are simultaneously anti-critique-of-fandom and desperate for fandom to be legitimized in the same vein that literature have realized two things:

If fan fiction is going to get the validity and legitimization of literature, the way we talk about it – the way we should’ve been talking about it – will change to encompass more avenues for criticism. Just saying…

During “Banned Books Week” this year, I saw a Tumblr post that used the week and several classic books to make a point about problematic fiction and the “need” for the Archive of the Own – and for the Archive to then host problematic content that no one can ever be vaguely critical about.

This post, on tumblr, has almost four thousand notes and probably has been seen by thousands more people who chose not to engage with it for some reason or another.

It’s also at least half-wrong in its approach. (I’m being generous here.)

Starting with its opening question:

What do we lose when we condemn the existence of fanworks that include unhealthy, traumatic, violent, or otherwise difficult material?

Folks in transformative fandom have a really weird time of things because some people really want fic to be taken as seriously as literature supposedly is, but they don’t want fic to be critiqued the way that literature is. Not content-wise, not on style.

And let’s talk about how that “otherwise difficult” hides a lot of content that I think most people would find iffy because well… it is. It’s not difficult content. It’s disturbing content. It’s content that eroticizes experiences that really shouldn’t be turned into spank bank fodder. Using vague terms to get out defining what people are talking about is a smokescreen to hide what the OP is actually talking about.

And like… I’ve seen a ton of truly horrific stories hosted on the AO3 over my time using the archive as a reader and a writer that’d fall under “otherwise difficult”. Here’s a small sampling:

The OP of the post uses four books as their examples, framing them as stories on the archive in order to make their point. I’m going to go over just the first one really quickly and talk about the problems behind literally reducing classical fiction down to AO3 tag and story structures to be like “hey, antis wouldn’t want us to read this” is beyond disingenuous.

This book-as-fic is rated E for Explicit and has Archive tags for Graphic Depictions of Violence, Rape/Non-Con, and Underage. It also is tagged with Sexual Abuse, Incest, Racism, queer sexuality, domestic Violence, Teen Pregnancy, Infidelity, and Explicit Language.

The summary that the OP used for this is as follows:

A young girl, Celie, writes letters to God documenting the hardships she experiences as a black woman in the American South, and the hard-fought love she ultimately finds from friends and family.

If you’ve ever read The Color Purple, you can probably see how reductive this summary and tag collection are. To make a point that The Color Purple would’ve been booted from The Archive As Antis Want It – which is again the underlying point across this piece, that there’s a fear of censorship from antis (of what I ask again, be specific about the content they’re against or shut up) – by squashing a deeply nuanced plot about queer Black womanhood into smug AO3 story display.

The racism that is in The Color Purple is far different from the racism present in a large number of fanworks – casual, unchecked, often eroticized, aimed at white people with mutation or superpowers, and full of tacit or explicit approval from the author.

The racism “tagged” for The Color Purple is not the racism present in stories where Black characters are demonized by non-Black creators for a non-Black audience. It’s not the racism present in decentering Black characters in order to focus on white ones. Walker wasn’t playing with an objectifying view of Black bodies as unworthy of love while hypersexual and always ready to top some non-Black bottom into incoherence.

That because “real authors” get away with brutalities on the page, so should fic writers because they’re supposedly targeting and reaching a smaller audience.

The OP here is making a point to diminish and kind of… muddy what The Color Purple is actually about in order to claim that because it was banned (because of racism, for sexual violence, for queer sexuality) from schools and libraries at a point, it’s content that’d fit on the Archive but also be removed if “antis” had their way.

But that’s not how any of that works.

Right now, on Twitter, there’s a ton of conversation about “purity culture” and what content should be allowed in fandom following some outcry about an author’s NSFW Homestuck fan fiction from 2013 – the characters in Homestuck are all children, apparently.

I’ve seen accounts make sweeping statements about how all fan fiction is okay and shouldn’t be criticized on any level for the content because it’s a form of media created by marginalized women first and foremost. Of course, I disagree with all of that –

But what I find fascinating is that a lot of this commentary is coming from published authors, some of whom that write for teenagers via the Young Adult genre. We’re talking about people who literally know the impact fiction has on other people and are paid to create work that impacts other people. Young people.

And yet I’ve seen multiple authors I know of that are basically saying that well actually… fiction somehow doesn’t mean anything or impact anyone and content exists outside of its contexts. Wild weirdness coming from people who make a living from impacting people with their words and worlds, I know.

Fan fiction is more visible now than it has been at any previous point in fandom’s history, I think. People teach courses about it and have their students write it for assignments. Multiple films are based on romance novels that are basically fic with the serial numbers filed off.

So why is it so hard for folks to accept that with legitimacy comes… a lot of stuff. Like personal responsibility and the understanding that folks will criticize us for problematic content we’ve created.

Zeenah writes about comics, nerd history, and ridiculous romance novels when not working frantically on her first collection of short stories and complaining about stuff. One day, she'll settle down and write that novel.
View all posts by Zeenah →
This entry was posted in Fandom and tagged fandom, literature, shipping, shipping culture. Bookmark the permalink.