There’s nothing about my Twitter account that clearly pings the mind and calls me out as an obvious fan of K-pop – or… pretty much any form of nerdery outside of a single comic.

My profile picture is a picture of my face, not a Korean artist or a superhero. My display name and @ aren’t a fandom in-joke. (Although the little leaf/tree emoji in my display name is a reference to Kim Namjoon of BTS. I did it for his birthday in September and then… just never changed it.) 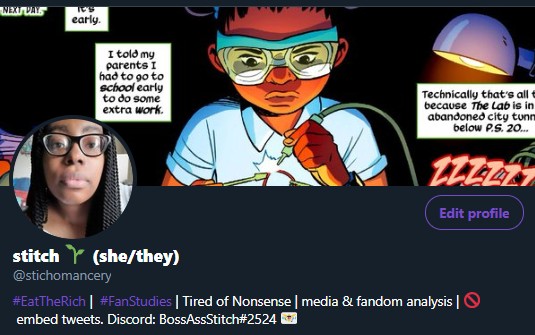 I do get that the only notably nerdy thing about my twitter account is, at first glance, my header image of Lunella Lafayette from Marvel Comics’ Moon Girl & Devil Dinosaur. And if you don’t know anything about her comic, it’s easy to assume it’s not nerdy.

But between my apparently invisible fannishness and my very visible Blackness, no one ever assumes I know anything about K-pop. Or Star Wars. Or fandom.

The first thing is my thing, you know?

I’m into a ton of different fandoms and when faced with having to try and choose one to represent fully across my Twitter profile, I kind of froze and chose one thing. So that inability some fans have to recognize me based on my profile and whatnot? That’s on me.

But then there’s the thing where Black people aren’t necessarily read as fans across many different fandom spaces around the world.

When many people think of “fans” or “fandom”, they don’t think of Black people first or even second. So when we’re in these fandom spaces, we’re definitely a community or demographic that is well… underrepresented and underappreciated. We’re assumed to be outsiders first and foremost and have to “prove” the appropriate levels of fannishness in order to be taken seriously by other, usually non-Black, fans.

What’s frustrating – and why I’m writing this Fleeting Frustrations installment – is that fannishness is something that Black people aren’t assumed to have and it’s impossible for our presence in fandom to even be neutral.

Our fannishness is something that can be taken away from us without a moment’s notice: usually because we’re critical of an aspect of fandom.

You’ve probably noticed that I’m spending a lot of time engaging with and talking about Korean pop and hip-hop music – both in the context of my project on antiblackness in the industry and its fandom spaces and because I just really like this music and I’ve found a ton of artists I enjoy and fans I love having digital fan time with.

One thing I don’t enjoy?

That every single time since April – when I started actively tracking this sort of thing for my project – when an idol has been criticized even for recent incidences of cultural appropriation or the fact that the majority of people do not apologize for their antiblackness and appropriation, one thing jumps out at me.

The idea that “real fans” wouldn’t criticize these celebrities.

That they’d let the recent appropriation go or that they’d stop talking about the fact that they’re disappointed or that they’d just ignore that even when we do get a rare apology, they’re largely vague and unsatisfying.

Real fans would be loyal and love unconditionally, and when some fans (Black fans) don’t roll over and let things go –

It’s proof that they’re not (and can’t be) real fans.

That they’re antis (against the artist), multis (who like multiple artists and can’t be trusted to care The Most about the artist being criticized), or locals (not a part of stan twitter and with supposedly zero understanding of fandom).

Have an opinion on k-pop fandom and a position in fandom will be assigned to you.

I spend a lot of the time I do get to use twitter these days kind of adjacent to stan twitter. I see a lot of wild shit in my primary fandom spaces and here’s one thing that keeps leaping out at me.

At the same time a lot of various k-pop fandom spaces straight up will wonder why things like hashtags like #Black[Fanbase]SelcaDay hashtags or #BlackGirlsLikeKPopToo go viral, these are spaces where people literally will brush off and erase Black fans for being “too loud” in fandom spaces or being critical of an artist or group.

(Like one thing that continues to piss me off about the fandom reaction to some Black people who were and remain frustrated by J-hope’s hair in his “Chicken Noodle Soup” update is how there were so many non-Black people in the fandom who couldn’t even just pretend this wasn’t happening but had to be like “yeah, no, those Black people who are upset aren’t real fans of the group”.

Like they decided that actual fans couldn’t be fans because they were expressing criticism and that they had to be multi fans and therefore not worth listening to or flat out anti-fans of the group. You know… instead of them being Black people just fed up with how Blackness is a costume in this industry.)

Criticism is one of the surefire ways for Black fans to be deemed as “outside” of fandom. Obviously, I provided an example of the thing in stan twitter/band fandom spaces, but let’s be very clear here: stan twitter spaces aren’t the only spaces where Black fans aren’t treated as “true” fans or where we’re flat out not assumed to be fans in the first place – unless our existence is needed to shut down someone else’s conversation about how racist a fandom space is.

There’s something about Black fans having critical opinions of any kind that sets folks in fandom off and immediately makes us Enemies Of Fandom to them.

It doesn’t matter what kind of opinion or how the criticism is framed. It just matters that a Black person had an opinion that doesn’t push fandom positivity and that probably doesn’t let an instance of antiblackness go unchecked.

Regardless of whether we’re nice about our criticism or sharp about it, the response from fandom to the existence of Black fans daring to voice any level of dissatisfaction with a piece of media or the fandom it has spawned is… often vile.

That’s because Black fans are seen as absolute non-issues. Our opinions don’t matter and aren’t valued until fandom needs a handy Black face to validate something that they’re into and shut down other Black fans – and non-Black fans talking about antiblackness in these spaces.

So, Black fans are not true fans until we can be useful fans.

Until our Blackness can be used in fandom, for fandom.

The cultural appropriation conversations held constantly across K-pop fandom spaces and how some Black fans are used to in/validate people is one such space, but –

I also see this behavior a lot in transformative fandom spaces, especially where shipping is concerned. Where someone points out that a fandom is antiblack because of years of antiblackness in their fan content creation or in their interactions with Black fans and a Black fan rolls up to be like “well it’s not or else I wouldn’t be here”.

Like the opinions of Black people don’t matter – we’re not real Star Wars or The Flash or Marvel fans – until we support some shitty opinion about the value of a Black character or a relationship they’re having in the franchise.

The other day, when I was telling my bosses about my whole thing about James Bond in the wake of the new trailer, my one boss was like “Wait, you like James Bond?”. That sparked a whole thing where they absolutely couldn’t wrap their minds around the fact that I was a die-hard Bond fan because I didn’t “look” like one.

Unless they were expecting me to swan into the office at nine AM with Bond’s drink of choice, a spiffy suit, and eye candy that’ll vanish by the end of the day to never be seen again –

That’s everywhere and it’s something that stops folks from treating us like we belong in fandom.

I think it’s important that folks in fandom think about what “true fans” look like to them and why Black fans consistently get treated as though they could never ever actually be real fans of a thing. Especially when they’re critical of the thing or its fandom.

Zina writes about comics, nerd history, and ridiculous romance novels when not working frantically on her first collection of short stories and complaining about stuff. One day, she'll settle down and write that novel.
View all posts by Zeenah →
This entry was posted in Fandom and tagged fandom culture, fandom racism. Bookmark the permalink.