Stitch Does Stuff in February 2019 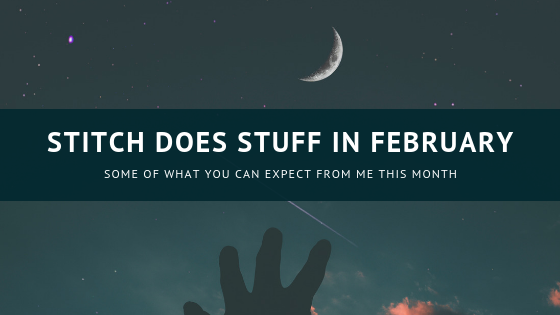 Well, for the first two-weeks of the month… probably not that much.

I’ll be visiting my elderly father in the USVI for a multi-purpose visit (he hasn’t been well, I won’t be able to visit for his birthday in April, my brother is getting his babies christened while his family is there, and doing research for a couple of stories I have set on the island) between the 4th and the 13th.

While I’m in the USVI, I don’t have internet access unless I get a ride to the local library or hang out at an internet café downtown where the tourists hangout. (I could go to the university to use their wi-fi/computer labs since I already need to ask a question of the librarians for a project I’m doing, but it is weird to hang out at a school I haven’t attended in like eight years.)

Despite the fact that I’ll have my big laptop with me, I probably won’t have that much time to work so I’ll be using my time from today up until my flight leaves to write and schedule as much as possible for the time period. Some content is already scheduled on my website and Patreon as well as some tweets to make up for the fact that unless I borrow my bro’s phone, I won’t be able to communicate with y’all.

Therefore, everything on this list is tentative because it depends on how the trip goes and how much free-time and writing headspace I can grab during the trip so I’m not playing catch-up any more than usual following my trip.

Strap yourselves in for another ridiculously long installment of my Great Big Anita Blake ReRead. I’ve got stuff to say about everything the novel did really well, what it still sucks at, and the one thing I wish I could carve out of the book with my bare bloody hands.

I should finish up with Holly Black’s The Cruel Prince some time during my trip. As I love fucked up fae stories? I have to review it.

Spiderverse and Miles Morales: A Spider-Man Novel, When Authenticity Matters

I’ve talked a ton about a) why I think Brian Michael Bendis kind of sucks at writing Black characters and b) why representation of marginalized people matters. In this piece, I’m going to talk about what Spider-Man: Into the Spider-Verse and Jason Reynolds’ Miles Morales novel so different from what we’d gotten on Miles before and how, some level of authenticity is important when we’re dealing with representation.

Queer-Coding, Bad-Bat-Takes, And Why The Joker Isn’t That Important to Batman

Despite what many comic book writers, editors, and some comic historians currently, the idea that the Joker serves as Batman’s darker “other half” is one that hinges on incredibly modern interpretations on the character that go hand in hand with ham-fisted attempts to squash them into these roles.

In a new blog essay series, I look at media I loved in my nerdy past and talk about what I loved, what I wished it did differently, and how it needs to change/how it may have already been updated. In this inaugural installment, to celebrate the awesome updates made in The Wild Storm comics out now, I talk about the first twelve issues of Wildstorm’s The Authority before Mark Millar got his gross little hands on it.

What Fandom Racism Looks Like: Misogynoir – Black Women in the Way

Few things inspire more misogynoir than a Black female character that fandom thinks “gets in the way” of a ship involving two white characters.

One of the best ships to come out of Netflix’s Castlevania series is the OT3 relationship between dhampir Alucard, occasionally tipsy supernatural expert Trevor Belmont, and snarky Speaker Sypha Belnades

I’ve been promising a piece on Luke Cage’s Mariah Dillard since season one of the show. Now, I think I’ve got my angle. Since she’s a villain I love, I’m going to focus on that aspect of her character under my Stitch Loves Villains umbrella.

In book #10, the Anitaverse gets really gross. This is the start of the badness. I recommend preparing yourself with a stiff drink because this book is bad.

I’m experimenting with topics for upcoming UF101 posts and I’m trying to see where I can go when talking about magical negro figures in the genre. I wind up scrapping a ton of UF101 pieces or putting them on the back burner/forgetting about them, but I think I’ve hit on something with this one.

A lot of the fantasy I’ve been reading (and some of what I’ve been reading) focuses on nobles in various groups. I want to talk about fixating on class and navigating writing wealth when you don’t have much/and keep tweeting #EatTheRich on a regular basis.

What Fandom Racism Looks Like: The Problem With Preference

At some point this month, the draft of “What Fandom Racism Looks Like: The Problem With Preference” will be up. Before then, I’ll be putting up one last snippet!

Am I going to write 2000 words about how Nakia was the best character in Black Panther and deserves to be loved? Yes, yes I am.

This month there won’t be an Audience Participation poll because I won’t have time to work on a piece and tweet reminders at the beginning of the month. Next month though, I’ll be back on track with it. I plan to have March’s post scheduled to go up on March 1st at midnight and I already know what I’m putting up for TWO poll options next month!

I hope your February is awesome!

I’ll be posting pictures from my trip on twitter (@stichomancery) or instagram (@stitchmmix) whenever I get a chance/some service downtown or when we head to the island all the wannabe expats hang out on, but expect mostly radio silence for half of the momth! (I’ll share video and audio too, but that’ll probably go up when I’m in the airport on the way out.)

I appreciate y’all a ton and I can’t wait to get back and share my island with y’all as well as the stuff I do manage to get written this month!

(And then in March, it’s BLOG ANNIVERSARY AND GIVEAWAY TIME!

Zina writes about comics, nerd history, and ridiculous romance novels when not working frantically on her first collection of short stories and complaining about stuff. One day, she'll settle down and write that novel.
View all posts by Zeenah →
This entry was posted in A Catch All and tagged writing updates. Bookmark the permalink.

7 Responses to Stitch Does Stuff in February 2019