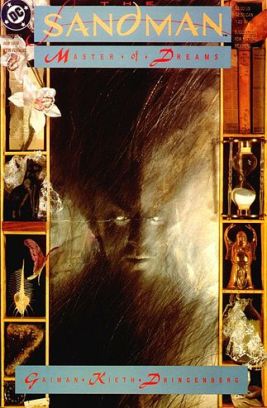 The first time I read The Sandman, I was twelve years old.

I came into it a bit late because the first issues were published before I was even born (and I think the series had already ended by then as well), but I knew from the first time I picked up the graphic novel at my local library, that I was going to read all of it.  I had a history with books that weren’t age appropriate and I probably shouldn’t have been allowed to take it out, but the public system in my neck of South Florida has always been a little lax when it came to graphic novel rating.

As much as I feel a little appalled at how easy it was for me to get books I really shouldn’tve been reading, I feel a little thankful to the library for their lax attitude towards monitoring who was taking out what. If not for librarians too out of the know to realize that Batman: Red Rain was a gorefest of epic and kind of awful proportions, I doubt I’d be the person that I am today.

Certainly, without Red Rain as my gateway to graphic novels, I wouldn’t have known about The Sandman.

From the start, I loved everything about the series.

I was twelve going on thirteen so the sex, drugs, and violence in the book were right up my alley. I started from the beginning of the series, with the trade Preludes and Nocturnes and promptly had opinions. I was familiar with superheroes and loved them immensely. Some part of my brain had expected this book to be like other graphic novels I had read where the superheroes were there but were just… different.

By the end of the first book, I’m hooked. I remember how it hit me, looking at the horrifying images in the book and kind of being NOT OKAY with the violence. I read it anyway, looking over the pages even when I was cringing. For me, The Sandman was far more intense than Red Rain had been because the characters felt more real.

At the end of the Batman book, I knew that this was an Elseworlds tale where outside of that universe, everything was peachy (or as peachy as what I now know to be the Dark Ages of comics could be). Batman wasn’t a vampire. He wasn’t a killer. Poison Ivy wasn’t dead. What happened in Elseworlds largely stayed in Elseworlds.

Everything had consequences for the Endless (even the nigh untouchable Desire) and some of them would have consequences on characters who were part of the main DC Universe. Violence and death couldn’t be undone easily. Sex was on the page for pleasure and it had consequences too. Characters got pregnant. They got STDs.

At age twelve, Neil Gaiman became my writerly idol. Here he was writing about real world topics in a universe that had superheroes, the Endless, and gods come to life and making it look like the best job in the world. I wanted to write like him. A little part of my brain wanted me to be him.

So tried to get my hands on every single graphic novel, side story, and interview that I could. By the time that I was in my last year of high school (a smushed Junior/Senior year when I was 16), I knew all that there was to know about The Sandman‘s wide cast of characters. I also knew that I was going to be a writer. I didn’t think that I was going to write exactly like him, but that there were so many things that I identified with in his writing that I needed to be on his level.

The last time I got anything new for The Sandman though, was when I was in high school. My boyfriend at the time had given me Gaiman’s book about The Endless as a birthday gift and while beautifully rendered and written, something didn’t click. I loved the book, but not with the all-consuming passion that I had felt only four years before as a tween reading something decidedly forbidden.

Aside from rereads of the original series, I kind of stopped thinking about it. Sandman  was like this thing I read to remind myself that I liked to write and that I liked to read. The way that Gaiman crafted his world and like… just wrote dialogue and breathed life into these characters was the ultimate treat.

I call The Sandman my ultimate problematic for a bunch of reasons. (I have other faves — like Stormwatch or The Authority — that other people would consider more problematic and maybe they are but my response to them and my desire to reread on end are entirely different which is how they got ranked lower.)

You know, to ignore the problematic aspects of the series is to have your head stuck deep in the sand. The Sandman has so many positive qualities and continues to deserve all of the praise it’s received but there are things wrong with it. Things that when I realized them, made me think.

I don’t like how race is kind of a non-issue in this series. While I’m pleased as punch about Wanda and recognize that having a transgender woman with such a huge role in comics is a big deal, I think her portrayal and treatment is transmisogynistic. His interpretations of mythological figures were… iffy.

But I can’t even begin to verbalize how much his work (flaws and all) changed the way I looked at both literature and life. Even as I found myself disagreeing with messages in the narrative, I was excited to recognize parts of my identity in his work. I was figuring out my sexuality, the politics I wanted to support, my interest in paganism as a once-devout Seventh Day Adventist–

You name it and I was probably struggling with it.

And I did find answers to some of the things that I worried and thought about in his series.

I also feel as if Neil Gaiman’s work on Sandman changed the way that I wrote. I thought more, wanted more, dreamed more because his series showed me that the world literally was in reach for me to write about.

I think that after years of little kid writing classes where they kept saying “write what you know”, constantly seeing that Neil Gaiman was like “screw that shit” when I was just hitting my stride as a writer.

You never know how much you need to have that realization until you have it.

Right now, I can’t remember the last time I did a Sandman reread. I didn’t look up the new series out with DC/Vertigo right now and the idea of a Sandman film (with a majority white cast and starring Hollywood’s favorite sensitive actor Joseph Gordon Levitt, no less) leaves me cold. I no longer get EXCITED about the series. I no longer feel the need to look at the series and tell myself that this is the kind of work I want to do. I’ve long since internalized that.

But even if I don’t read and reread religiously, The Sandman will always be my ultimate problematic fave because of how much it impacted me and shaped me. Is that I a good or bad thing? I’m not a hundred percent sure. But I wouldn’t change it for the world.

One thought on “The Sandman: My Ultimate Problematic Fave”