Today, I woke up to two interesting things going on in comics. Both things revolved around women and girls in comics. I have thoughts on both but I’m a wee bit grumpy about them weirdly enough (thankfully, some commentary from and about my nieces helps soften that a bit I think).

The first thing was Marvel’s partnership with Her Universe and Hot Topic to come up with a line of Avengers-inspired clothing for women. Now I’d heard about the line of clothes before when they were first throwing it about and everyone on the internet was like “well, if they’re making a line for men, then they better make some dresses too”, but they’re finally up for preordering.

I like most of the dresses and will probably get the ones for Thor and Captain America, but these dresses aren’t exactly affordable. They’re $45 to $65 per piece and that’s just for the sizes that Hot Topic sells. If Torrid, Hot Topic’s sibling store, sells the outfits at all they’re guaranteed to be even more expensive because there’s a tax on being plus-sized.

They’re more affordable than the last cute comic-themed clothes I wanted (which was selling the pieces in the collection for $70 each) so I’m going to consider pre-ordering the Captain America dress but I’m more of a “five dollar boy’s tee from Walmart” kind of nerd so this is difficult for me. I hope that my other nerds have less trouble making up their minds and that Torrid says something about getting plus-sized versions of the dresses though!

What I really want is to find a way to get affordable, cute clothes into the hands of nerds. I feel like unless you want to get those t-shirts from Walmart that every twelve-year-old boy in the world probably owns one of, that buying cute nerd clothing is largely off limits. I mean, something like HotTopic at least.

Maybe HerUniverse will pull a Nicki Minaj in the future and do a slightly cheaper line of clothes for people who can’t drop $50 on a single article of clothes?

One can only hope… 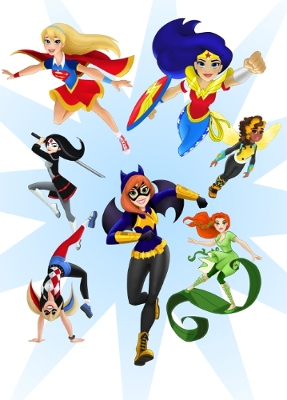 Now in other nerd-related news: I just found out about DC’s new initiative for little girls thanks to the awesome and always well-informed DCWomenKickingAss blog. DC Super Hero Girls will be something that’s accessible for little girls and that will include them in comic book culture. I like that DC and Marvel are finally doing something to show girls that they belong in comic book stores and that comic culture is for them too but it’s so late in the game.

We’re talking about an industry that sold merchandising rights to anyone and anyone back in the day and that toys, clothes, and god only knows what else available to 1940s nerds of all genders.

We’re talking about an industry that had 91% of girls age six to eleven reading comic books when it first started out (see Bradford Wright’s fabulously detailed Comic Book Nation for the rest of the statistics).  This is the same audience that DC and Marvel are only now realizing that they need to cater to in any way. What did they think: that that 91% just grew up and stopped reading comics all together? Or that they didn’t teach their children to love comics?

My mom grew up reading the post-Code horror comics like the very books that got the Comics Code created in the first place. She might not know who all the Robins are now, but she knows enough that when I started seriously collecting comics and started talking about a desire to do comic book journalism, she supported me. Because my love of comics was once her love.

I feel strongly about the DC Super Hero Girls Initiative and about the big two doing what they can to provide comics and merch to girls and women, but it’s super late in the game and it’s not enough. This initiative focuses on girl heroes for girls.

This doesn’t do anything to combat the stigma of boys liking anyone but male superheroes. It does nothing to combat the erasure of female superheroes on merchandise that has a wider range. I want a sheet set with the Justice League with all of the heroes on the main roster, not just the heroes that would be super appealing to a little girl (or who they think would be appealing to a little girl).

Right now, my eleven-year-old niece Emm is super into Nightwing and Jason Todd as Red Hood. She plays Injustice, she reads Scott Lobdell’s Red Hood and the Outlaws series religiously. She owns a handful of trades and floppies and is the only person that I know who’s actually interested in seeing the Ant Man movie.  She’s a tiny superfan.

Unlike her little sister, Emm doesn’t want a superhero collection that’s exclusively for girls and about girls. She just wants to go to the store and buy merchandise in whatever section she finds it in that doesn’t leave off the lady heroes.

And I feel the same way.

The initiative is a good thing. It shows that DC is hearing what we’re saying and giving fans what they’re asking for. Getting it right late in the process is better than not getting it right at all, I guess. Who knows, maybe by the time Tee is eighteen, we’ll have mixed gender superhero teams on kids’ bedding.

Okay, I’m being a bit harsh and I know it.  I’ve been burned before by things like this and so I’m always ready to be the bitter beast in the room. However, I’m not the audience for this. If I buy some of the stuff when it comes out and enjoy them, cool. But I’m not the audience. So I decided to read the information that I found about it to my 9-year old niece Tee.

After I finished, the kidlet decided that she had some thoughts:

Tee is a huge Harley Quinn fan. She’s watched the Batman Animated Series precisely so that she could watch Harley and Pamela in them and for her very recent birthday, asked for Harley Quinn stuff for her gifts.

Right now we’re reading Gotham Academy and Ms Marvel on my kindle because she wants heroes that are closer in age to her. When Tiny Titans was out she loved it and I bought a copy of that cute Scottie Young baby Avengers and X-Men oneshot. Despite the fact that I’ve been reading comics to her since she was a toddler and that she probably knows more about the X-Men than I do, I could tell that Tee wasn’t always okay with being interested in comics.

It was, to her, not a very girly thing.

But while reading her the list of cool things that DC Super Hero Girls will be coming out with over the next year and watching her freak out (to the point where it was just wordless beautiful glee because she could have some of this stuff in her hands for Christmas), I realized something.

I’m good. I’m carving out my place in comics and figuring out what makes me feel good. Right now at twenty four I don’t need that initiative and I can be bitter as hell if I want to be (but I’m going to quell that ASAP). But my nine-year-old niece does. Maybe my eleven-year-old niece does too.

I’m happy that it’s going to exist and hopeful that we see some serious and long-lasting change in the comics industry.