[Guest Post] Searching for Black Mothers: Looking in the Margins of Black Panther and Into the Spider-Verse

This awesome guest post comes courtesy of Samira Nadkarni! Images in the header are from ComingSoon.net (Spider-Verse) and KissThemGoodbye.net (Black Panther). 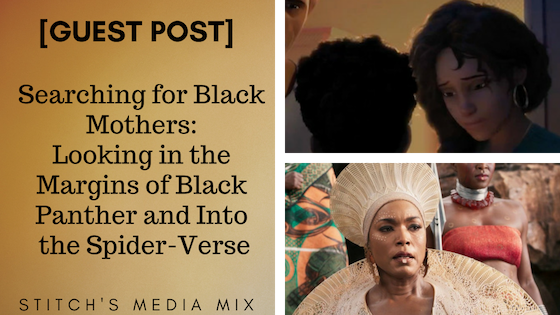 Earlier this week, I read Zina’s post on Spider-Man: Into the Spider-Verse, the character of Miles Morales, and the idea of authenticity. While agreeing wholeheartedly with the post itself, I found myself struggling to articulate my current position, which is that while these films construct nationalistic racial and cultural narratives in ways that allow for reclamation and representation, the process of these claims seem to hinge on specific connections between fatherhood, masculinity, and nationality.

While women are present, and while mothers are present, they’re somehow not part of that narrative. This is a complex and confounding thing because these films aren’t being positioned as inherently patriarchal or lacking in female characters, yet the underlying implications of its narrative suggest extremely traditional patriarchal ideology.

My hope is that I can briefly trace this out here, and maybe that we can consider the ways in which films like Into the Spider-Verse and Black Panther centre Blackness, authenticity, heritage, a coming into oneself, and national identity, while also seeing how this amazing intergenerational space is somehow all about Black fathers and isn’t necessarily leaving a whole lot of room for Black mothers.

I should probably pause to caveat this with the fact that I enjoyed Black Panther (though I remain sceptical of its geopolitics and political ideology within the MCU) and really enjoyed Into the Spider-Verse (though I remain annoyed by the excessive body shaming of Peter B. Parker and the film’s narrative choices for many of its side female characters).

I very much recognise that expecting them to be perfect films is to place an undue burden of representation upon them. At the same time, I think there’s space to talk about narratives these films may be constructing un/intentionally even while acting as spaces of reclamation.

Watching Black Panther last year, I found the film’s depictions of masculinity were very much linked to culture and to nationality, but when doing so, this was used to emphasise fatherhood over motherhood.

Women in this film had a great deal of agency, yet we never really saw Jadaka/ Erik ever talk about his mother or N’Jobu reference her. (Coogler mentioned the cut scene in an interview, and stated that she died in prison, positioning her death as character motivation for N’Jobu while not really expanding this narrative beyond that).

Ramonda, though present, was largely a foil to mourn or celebrate T’Challa with little to no room for her own identity outside of this.

I found myself tweeting after the film that while I felt like I knew Shuri, Nakia, and Okoye, but I couldn’t say I felt I knew Ramonda. I only knew her as a foil for T’Challa.

Even as the queen of an uncolonised Wakanda, she was somewhere in the margins of that narrative. This was an unwieldy thought at the time because I would be hard pressed to describe Black Panther as a film that isn’t engaging with American feminism, and yet I felt there was an imaginative gap in play.

Black Panther, on its surface, was about re-examination in the aftermath of a problematic nationalistic and patriarchal legacy, but it still excluded matriarchs. Even  W’Kabi, whose urge to avenge his father’s death at the hands of Klaue informs the plot, has no mother figure present in this narrative.

Three distinct moments about Black fathers linked to the fate of nations and ideological legacies suggests narrative emphasis. Its futuristic enterprise thus repeats patriarchal value systems; links to heritage and memorialisation are framed solely through masculinity, through fathers but not through mothers, even (or especially) within dreamscapes which locate heritage and a historical community. It suggests that while women’s work (Okoye’s work, Shuri’s work, Nakia’s work, Ramonda’s work) will be a part of a nation’s history and its progress, they won’t be commemorated or memorialised in these depictions of heritage. They are not to be seen as the ideological community that matters.

Nearly ten months later I watched Into the Spider-Verse, and I had the same moment of hesitation. The narrative of the film positioned Miles as claiming his space, his city, his histories, feeling like he belongs, sets up a relationship to space and place that reimagines and recentres Black Puerto Rican lives in Americana.

Yet I found that days after the film I was still trying to figure out how a film with so many female characters seemed to specifically centre fatherhood over motherhood again. No matter how often I tried to think the film through, it remained that there were multiple scenes where Miles interacts with his father (Jefferson Davis) but his mother (Rio Morales) while present, served extremely limited purpose in the plot.

There’s lots of ways I could excuse this—she clearly works at a hospital so hours are going to be unpredictable, we do get brief scenes where Rio advises Jefferson and they clearly work as a team in their marriage (though these remain focused on Jefferson and his relationship with Miles), or it could just be that there were scenes but they ended up on the cutting room floor—but the fact of the matter remains that regardless of intent, the film itself does sideline Rio in favour of Jefferson in the narrative.

The fact is: at the end of both movies I felt like I knew more about Black fathers and dead Black uncles than I did about living Black mothers. And I had no idea what to do this fact once I acknowledged it.

My problem with this is additionally complicated because I’m a fan of equal parenting and I love the fact that both, Black Panther and Into the Spider-Verse, allow older Black men space to have emotions that they show their children, that their caregiving is loving and supportive, that they emphasise the eventual need for communication.

The choice seems to be to continue in a traditional patriarchal foil (Ramonda) or be absented and appear on the margins of a father-son relationship (Rio and Ramonda), neither of which open room for young Black female characters to imagine themselves as they mature or for older Black women to see themselves as essential in these acts of socio-political and cultural reclamation.

We can have Shuri be young and smart and kickass, we can have Nakia be a badass diplomat, we can have Okoye plan and fight, but if we look down the line to the spaces they might inhabit in a decade or two, there’s the oddly object-self (not subject-self) of Ramonda. In Into the Spider-Verse, despite being side-characters, I could see what Mary Jane or Liv Octavius could be in the future because we had Aunt May. I never got enough of a sense of Rio Morales that I could see her in the spaces of her son’s claimed world/ claimed cityscapes.

Knowing what we know of reclamation and social justice movements and the ways in which cis Black women, Black trans people, and Black non-binary people have done so much heavy lifting, it seems like such a huge gap in the narrative to have them sidelined from a range of spaces they’ve earned in these mediascapes.  It shouldn’t be one step forward and two steps back—men abandoning toxic masculinity and taking on caregiving used to erase Black maternal figures in the process—it has to be more complex.

This might seem like a reach on my part—and I’ll admit that it seems like a small gripe in the face of so much that these films are doing well—but I see the same set of emphases playing out in the films’ fandoms as well.

For example, there’s a pretty great Spider-Verse fanfic in which Jefferson realises Spiderman is a kid and tries to adopt him/ care for him/ bring him home. And this is great because it riffs on many of the highlights of the film—Jefferson’s willing emotional investment, his caring and parental nature, Miles’ panic at negotiating a relationship with his cop father as a vigilante superhero—but guess who was missing from this fic?

Fanfic depicting Ramonda barely allows her agency outside her role as mother or queen, both of which see her as utterly subservient to T’Challa’s heritage and legacy. She’s not positioned as having access to these, even as she grooms Nakia to take her place. And the thing is, I don’t know that many people notice this gap in our collective imaginations when adding to the fictional landscapes of these worlds.

I’m drawing in part here on Ebony Elizabeth Thomas’ really compelling theorising of The Dark Fantastic (2019). Thomas’ argument traces the imagination gap in the fandom responses to a lack of diversity in children and young adult media, the ways in which problematic representation or a lack of representation manifests itself in fandom’s responses, thereby simultaneously repeating and informing real world socio-political ideologies and racial narratives.

While Thomas’ book doesn’t look at Ramonda and Rio, I’d like to suggest that her work absolutely applies even within these films that are engaged in the work of diversity: that there is an imagination gap in how we conceive of Black mothers in the filmscapes in which Black identity is being reclaimed, imagined, and positioned.

My aim here is not to question Ramonda or Rio’s authenticity in the brief moments either of them are onscreen; that’s not my place.

My aim is to ask why nationalities and the claiming of space (because there are negotiations with socio-political and geopolitical identities) are being linked solely or primarily to fatherhood and masculinity even as we’re moving into spaces where diverse representations of Blackness and #ownvoices exist onscreen.

My aim is to ask: where are Black maternal figures and why aren’t they essential to this narrative too?

An academic and freelance journalist by day, Samira Nadkarni spends far too much of her time having feelings and yelling on the internet. Although she sometimes writes reviews for the SFF magazine, Strange Horizons, the majority of her energy is spent reading, binge-watching terrible TV, and being stared down by her cat. You can find her on twitter @SamiraNadkarni!

Zina writes about comics, nerd history, and ridiculous romance novels when not working frantically on her first collection of short stories and complaining about stuff. One day, she'll settle down and write that novel.
View all posts by Zeenah →
This entry was posted in Guest Posts and tagged Black Panther, black women, MCU, Miles Morales, motherhood, race and representation, Spider-Man: Into the Spider-Verse. Bookmark the permalink.

2 Responses to [Guest Post] Searching for Black Mothers: Looking in the Margins of Black Panther and Into the Spider-Verse