I think my pal Holly over at DiverseHighFantasy was one of (if not the) first people to use “white prioritization” in a fannish context in a piece on The Walking Dead fandom and the Rick/Michonne ship. So I’d like to open my piece by shouting out to hers.

As I’ve researched, I’ve found a really great starting point for talking about “white prioritization” in Sincere Kirabo’s definition of “white-centeredness” in this piece entitled “On White Supremacy And The Nature Of Norms”:

White-centeredness is a deeply-rooted aspect of U.S. culture. White-centeredness denotes the centrality of white representation that permeates every facet of our dominant culture. It upholds as “normal” and “expected” the ubiquity of language, ideas, prejudices, preferences, values, social mores, and worldviews established by the white perspective.

Like white-centeredness, “white prioritization” is all about focusing on white people alone. It’s a term that refers to the way that people constantly centers whiteness (white men and women primarily) and how that centering comes almost exclusively at the expense of people of color. It’s all about focusing on white experiences and making sure that everything is about white people – even the experiences of people of color.

White prioritization largely looks the same in fandom and media. White people – fictional and otherwise – are seen as more valid and more important than people of color. In media and the fandoms that it spawns, this prioritization takes many forms: 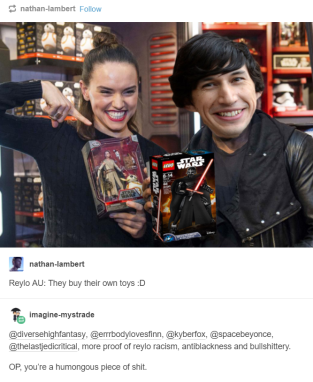 In fandom and media, people color simply don’t matter even in works where they make up the main audience. They’re not assumed to be as valuable as white characters in the same franchise because well… folks are racist.

We live in a world where people of color are seen as less valuable than white people. This translates to fandom where the value that fans place on characters influences the way folks talk people of color and what content they create for them.

Fandom’s whole thing about neatly snipping characters of color from their own narratives and edging out people of color from historic successes (e.g., focusing on Agent Ross or Bucky (who only had like ten seconds of screen time) in your Black Panther focus rather than on the you know… Black people in this movie) is racist because it’s yet another way that they show how little people of color matter to white folks in fandom.

Think about how many people went out of their way after watching Black Panther to focus on white characters – many of which weren’t even in the movie – instead of on the characters of the film. Many people rushed to place these Black characters in relation to white ones with headcanons and stories about things like how Shuri would totally school, sass, or adopt white characters or how Steve would like totally feel bad about his role in US imperialism and neo-colonialism after a Wakandan calls him a colonizer.

It feels like a repeat of stuff that we’ve seen in fandom before whenever Black characters get popular: they’re reduced to being the sidekicks or helpmates of white characters even when they’re the main characters.

Consider how the second end credit scene of Black Panther with Bucky Barnes led to fandom centering him in Wakanda and writing tons of fanworks and headcanons about him and him alone. That wouldn’t happen with a Black character in the end credits scene of a white character – even one the Black character was more popular than.

For example: Sam Wilson’s appearance in Ant-Man didn’t lead to him getting tons of content based on that scene and hyping fans up for the character to the point where it felt like he was kind of overwhelmingly the focus of fandom.

Fandom is full of people that swear up and down that they really do love [x character or performer of color] even as they share and support fanworks that remove them from the stage or scene entirely in order to focus almost exclusively on white (male) characters.

Think about the fact that while fandom racism – and the folks who talk about it – generally never get to be taken seriously, this aspect to fandom racism is seen as a non-issue entirely. It isn’t seen as “real” racism because of the whole pesky preference that leads to our fellow fans brushing off the racism they commit and support by the fact that they somehow aren’t attracted to people of color…

They just conveniently have a preference for white folks and no interest in unpacking like… any of that.

Folks in fandom thirst endlessly for white characters and basically kind of only remembers that people of color exist when they need something for their white fave to co-opt or a character to get in their fave’s way.

Zina writes about comics, nerd history, and ridiculous romance novels when not working frantically on her first collection of short stories and complaining about stuff. One day, she'll settle down and write that novel.
View all posts by Zeenah →
This entry was posted in Fandom, What Fandom Racism Looks Like and tagged fandom racism, What Fandom Racism Looks Like. Bookmark the permalink.

2 Responses to What Fandom Racism Looks Like: White Prioritization