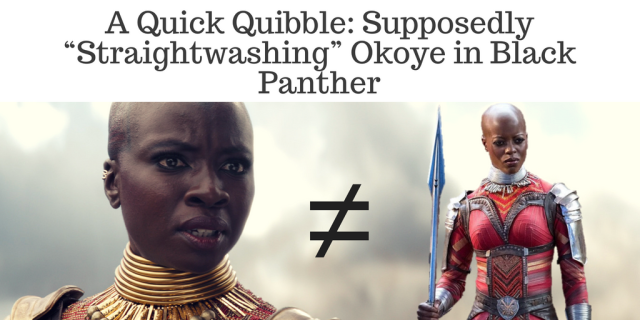 In a (now deleted) tweet thread from April of this year, writer and artist Kate Leth went in on superhero media for the lack of queer representation in the Marvel Cinematic Universe (MCU). The thread was fine and absolutely valid right up until the last tweet where she wrote that:

“There were queer characters in Ragnarok and Black Panther whose scenes were cut. Okoye was awkwardly made straight with a plot that went nowhere. Loki exists in subtext. It’s bullshit, pardon my french, that we’re just supposed to go “oh yeah of course, because of money”

It shows me that Leth might not be able to tell Black women apart from one another and that she doesn’t see the value in a character who chooses love of country and her faith in justice over the love of her life (after he sets himself against their country).

It shows me that while Leth knows the basics about the characters and the film (the cut scene with Ayo flirting with Okoye and the Ayo/Aneka relationship in the World of Wakanda comics), she doesn’t know enough to recognize that Okoye and Ayo (or Aneka) aren’t the same characters.

Leth is not the only person I’ve seen essentially accuse Ryan Coogler and the Black Panther team of “straightwashing” Okoye. (Heck, in an io9 article from this week, the header used an image of Okoye in a triptych of queer characters whose queerness isn’t in their respective film appearances.)

She’s just one of the most visible.

Additionally, she also dissed Black love in her tweet… that she never bothered to apologize for or engage with Black fans over before she deleted it sometime this month.

(I also have thoughts about how frustrating I find Leth’s choice to zero in on the two MCU films directed by men of color for this part of her thread considering the queer erasure that exists in other parts of the MCU, but I’ll keep those to myself.)

One of the things that Leth’s response reminds me of, is the way that queer Black people in fandom are often asked to choose between our gender, sexuality, and race when it comes to fandom and representation. We’re often asked (or forced) to consume media (fannish or otherwise) that doesn’t conceptualize us as queer, Black, AND whatever our gender might be.

In fact, many times when you see a queer white person like Leth talk up queer media that we should all be watching as queer people… it tends to be set in a super whitewashed version of an actually diverse locale and/or rife with racism towards people of color. (Seriously, several of the pieces of media I’ve seen white queer people hype up across social media have been full of anti-Black racism – erasure, objectification, or racist characters – usually left unchecked.)

These queer white folks in fandom somehow never seem to talk about queer representation for people of color when it exists in media… only when it doesn’t.

Think about the way that fandom insists on sleeping on the Anissa/Grace relationship in Black Lightning despite the fact that it’s a relationship between two queer women of color whose identities weren’t erased in the transition from comic to live action.

Think about how some Kirk/Spock fans lost their shit when it was revealed that “the wrong man” was revealed to be gay in Star Trek: Beyond. (Desiree Rodriguez mentioned some of this in her piece “Step Aside Spirk, It’s Hikaru Sulu’s Time to Shine” but that now seems to be offline.)

Think about the fact that queer characters of color — whether it’s canon material or fanon — don’t get as much visibility or as much attention/fanworks as white characters that fandoms portrays or perceives as queer. Think about which characters are almost always assumed straight at first sight. (See the slash shippers who see all the white guys in the MCU as queer but Sam Wilson and James “Rhodey” Rhodes are consistently relegated to heterosexual wingmen for their respective white friends.)

Aww man, look at this plot that went “nowhere”… oh wait, Okoye being torn between love of king and country and love of W’kabi is an actual important part of this film. How bout that?

I think I’ve still got a bit more time holding on to the frustration left because of how Kate Leth deleted the original tweet thread without making a visible attempt at apologizing for both conflating Okoye/Ayo and for writing off Okoye’s relationship with W’kabi as “a plot that went nowhere” when it provides a significant emotional highlight in the third act and inspires great think-y thoughts about loving one’s country.

Plenty of people left Black Panther swearing up and down that Okoye was actually Ayo or Aneka from the comics and not only was her sexuality not addressed in the film, but that it was erased due to compulsory heterosexuality.

It’s not just Leth, but I sure wish she hadn’t blasted incorrect information to her SIXTY-SEVEN THOUSAND followers without then following up on a clarification or correction once tons of people corrected her. (As far as I know, she also didn’t engage with any of the Black people that pointed out the problematic aspects of her tweet.)

You can (and should) call out the MCU for its lack of queer representation across the past ten years in, but maybe… try not to mistake one black female character for another or dismiss the validity or importance of seeing nuanced Black love onscreen in the process.

I mean, what’s the point of calling out queer erasure if you’re just going to be kind of anti-Black in the process?

There are other queer Black writers who have written about what Black Panther means to them — and what the lack of explicit queer representation did to them. There are Black people who have talked about how they left the theater feeling invisible because Ayo was onscreen and yet didn’t have much, if any dialogue.

Or a queer presence.

Those are the people I truly want to hear from.

Especially when a worryingly large amount of non-black people can’t figure out the difference between Ayo, Aneka, and Okoye? Maybe… they should skip them when talking about queer representation and erasure in the MCU.

Or leave these takes to people with lived experiences with queerness and Blackness.

Zina writes about comics, nerd history, and ridiculous romance novels when not working frantically on her first collection of short stories and complaining about stuff. One day, she'll settle down and write that novel.
View all posts by Zeenah →
This entry was posted in Fandom, Marvel Cinematic Universe, Rants and tagged aneka, ayo, Black Panther, marvel cinematic universe, Queer representation. Bookmark the permalink.