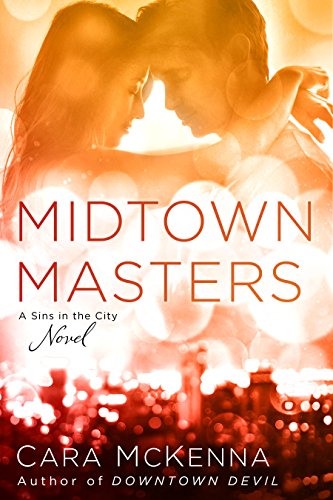 Note: I received an ARC (Advance Reader Copy) of this book from the publisher via NetGalley. All opinions expressed here are my own. This review has some spoilers for the book but they’re not major ones that you couldn’t guess from reading McKenna’s other books or the book blurb.

It’s Valentine’s Day folks and that’s kind of the perfect time to talk about the third book in Cara McKenna’s steamy Sins in the City series. Midtown Masters, comes out in a week which gives you plenty of time to read the other two standalone novels in the series if you’re a fast reader.

Out of the three books in the series so far, Midtown Masters is my favorite. Starring a pair of close friends who cam together for well-paying customers and the mysterious client that winds up sparking a deeper connection with one half of the duo, Midtown Masters has so much to it that was genuinely enjoyable.

First of all, I love the characters.

Our main characters are Soo-jn Park (who goes by Suzy in part to ward off creeps that would fetishize her identity), Meyer Cohen, and John Lindsay. I found myself both adoring and identifying with Suzy for a ton of reasons. One of the things that Cara McKenna does with her writing that I can’t get enough of is make the characters in her standalone works characters that I want to get to know. She gives us backstory and vivid characterization so that we’re reading about characters who feel like people.

More-so than the previous book in the series (Downtown Devil), Midtown Masters is very much about the way that these three characters fit together. We don’t see them really interacting with other people so it’s incredibly intimate because their spheres are so compact. It’s a story told from room to room and while it felt a smidge claustrophobic at times to me, it’s a fantastic method of storytelling that works with the characters and their relationships.

On top of that, Meyer and Suzy’s friendship is kind of awesome to witness and I really loved how comfortable they were around each other. I also really found myself identifying with Meyer. As a history major turned Literature grad student, there’s a ton about him that made me kind of perk up with excitement.

Cara McKenna writes some fantastic sex scenes. This is just a fact. She’s one of my writerly role models when it comes to writing steamy sex that doesn’t feel repetitive or boring at any point. I endeavor to write as well as she does one day.

I think my favorite sex scene is the first one between John and Suzy because it was so fragile and all the more realistic for it. When y’all hit that scene—

Well, you’re going to feel something.

Now, I’m a critical Stitch so I’d just like to mention two things that stood out to me that I want to talk about.

First, the blurb is a little misleading. John Lindsay doesn’t pretend to be a woman. He gives his last name and then just doesn’t correct Suzy and Meyer’s assumptions based on how they perceive that name as “typically” feminine because he’s shy and doesn’t want to ruin things. It’s a premise that I’ve seen done before multiple times and I just wanted to give y’all the heads up that it wasn’t anything even remotely gross.

Second, Midtown Masters is about two characters who do sex work and are coming from places of privilege in that they can choose to quit after a year. I don’t necessarily think that’s a bad thing (because again, it’s a thing that people do), but if you’re interested in talking about sex work, choice, and privilege, hit me up because I’ve got links to good bloggers who talk about their experiences.

Aside from turning me on (which, yes… it’s TMI but it’s my blog so whatever), Midtown Masters made me get critical in a pretty positive way. I love the characters and Cara McKenna’s go to kinks and dynamics in literature mesh pretty well with mine so I’m always raring to buy her books.

Now for the fun stuff: A Giveaway!

I’m giving away a Kindle copy of Midtown Masters to one lucky reader! In the comments, tell me about your favorite couple in the romance genre. I want to know about the couple that makes you get giddy when you think about reading work centering them and why you like them as much as you do!

I’ll get one of my literary major people to choose someone on Monday and then on Tuesday, when Midtown Masters is released officially, you’ll get your copy in your inbox!

Zina writes about comics, nerd history, and ridiculous romance novels when not working frantically on her first collection of short stories and complaining about stuff. One day, she'll settle down and write that novel.
View all posts by Zeenah →
This entry was posted in Book Reviews and tagged book reviews, Cara McKenna, contemporary romance, Giveaways, Midtown Masters, Recommended Rating, romance novels. Bookmark the permalink.
%d bloggers like this: