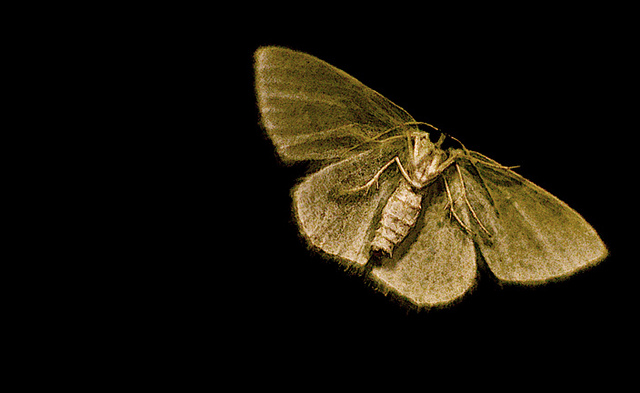 Note: “Lamplickers” is a colloquial term for “moth” that I grew up hearing in the US. Virgin Islands. Additionally, this story was previously published on Patreon for my patrons.

The lamplickers down on the island always swarm around the house when it gets dark outside. At least, they’ve done this on some level on every night in the week since I moved into my late grandparents’ house overlooking heart-shaped Magen’s Bay.

Drawn by some unfathomable instinct, they fling themselves at the windows of my room as if their weight alone will shatter the shutters and let them in. Some of them don’t survive. They ram into the window with so much force that they leave streaks of dark fluid smeared across the glass as their tiny bodies drop to the ground.

Sometimes, early in the morning when the sun has barely peeked over the top of the walls, the neighborhood chickens and sparrows eat the half-squashed bugs before the stray cats try to rush them in turn. The gardener, when he comes by hours later, will clear up the rest.

For now though, at night, the lamplickers keep coming.

The lamplickers bounce off of the glass with a dull sound that manages to remind me of rain hitting the windshield of my daddy’s truck. It’s a soft, ceaseless sound that never stops. If I close my eyes, I can imagine I’m playing pinball with someone dedicated to trying to beat me. If I close my eyes, I can almost tell myself that there’s nothing strange about a yard full of soft-winged lamplickers beating at my windows.

I get off of my bed, walking to the light switch next to the door as if in a trance. When my fingers catch the switch, I flick it. The room plunges into darkness that is nearly unbroken. The only light I can see is what comes from outside, a wash of pale moonlight with shadowy dots from the lamplickers’ flight.

Despite the darkness, or perhaps because of it, the lamplickers continue to surge forward against the now-smudged glass of my room’s windows. I decide to leave the room. Maybe they’ll get tired of it before dawn.

The house I’m in is smaller than most would expect, hidden as it is behind walls that stretch up towards the sky like prayers. I creep through my house on silent, bare feet, glancing through every room that I pass by and seeing nothing but shadows.

The noises of the lamplickers move from the windows to the front door. The sound is softer there, dulled thanks to the thickness of the walls and the doors of the house. However, I can hear it.

I can still hear them.

I can’t pretend away the lamplickers now. I can’t tell myself that they’re only just trying to get to the source of light in my house or that this is something that happens to people on this island. The sound of bug-against-door gets louder.

I don’t know what they want. Or why they only do this at night.

The closer I get to the front of the house, the tighter dread coils in my stomach. Every step that I take makes me worry. Every soft thud of a lamplicker hitting the door or a window too hard for its body to survive makes my skin chill.

I check the switch for the porch light.

It too is off.

And still, the lamplickers swarm.

They look for light, I was told as a child visiting my mother’s parents on the island where they were born. Even then they would crowd the outside of the house when I would walk by the windows, a cloud of translucent winged beings that crashed down on our windows like a wave. They don’t have mouths to bite you with, I was told as I watched them try to get in our house.

Tomorrow, I tell myself as I stand alone in the darkened living room and listen to the sounds of the lamplickers trying to get into my house. Tomorrow I will think about leaving.

Zeenah writes about comics, nerd history, and ridiculous romance novels when not working frantically on her first collection of short stories and complaining about stuff. One day, she'll settle down and write that novel.
View all posts by Zeenah →
This entry was posted in Short Fiction and tagged horror, moths, short stories, the virgin islands. Bookmark the permalink.