End of Semester Gushing + Plans for the Future 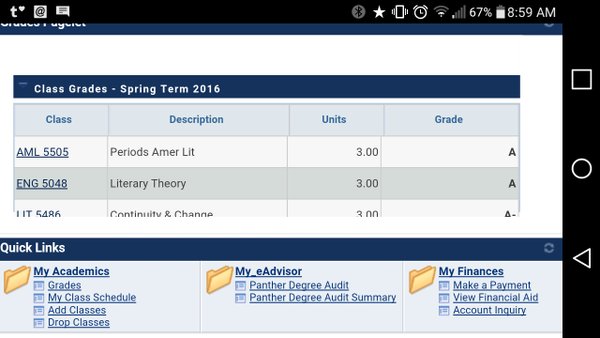 Guess who’s got two thumbs and all A’s this semester?

I am officially done with my first semester of grad school and it feels so good!

This semester was very difficult and incredibly time consuming. At one point, I was spending hours in the library studying, reading, and napping. This is of course huge considering how, when I was in undergrad, I basically only went into the library to get books.

I had to pass on one writing job and I think I lost another one because I just couldn’t focus on anything other than schoolwork, but I have literally never focused this hard on schoolwork before – even that summer where I wrote that ten-thousand word long paper on comics (which I am also considering revamping).

And you know what? I still had fun. I still had time to make friends and network and read a lot of books.

Seriously, I probably wouldn’t have done as well as I did without my newfound friends Gabby and Jorge because we clicked from day one when we were all wearing nerdy ass shirts in our Hemispheric 1850s course.

Gabby is just a gem. She’s so sweet and she’s a huge Octavia Butler fan!! And Jorge is so cool. Like seriously, what a good dude!! (Seriously, he knows everything about both Derrida and Steven Universe and talking to him is truly an experience).

I made other friends this semester, friends I hope will last forever, but I kind of feel like Jorge and Gabby are too amazing to let go of, you know? This semester was intense for many reasons but it felt like together, we went through the fire and came out stronger because of it and each other.

Now it’s time to talk about my goals and achievements:

A short story for that same class that showcased the transnationalism we were focusing on in class. (I’ll post it here at some point in the coming weeks)

For Transgressions, I wrote two ten page papers: one was on the nature of transgression as it revolved around identity while the other was about transgressive sexual and suicidal urges in J.G. Ballard’s Crash

For Critical Theory, I wrote two papers that I’m rather proud of.

One is about Fifty Shades of Gray, fandom/transformative fiction, and how the application of Roland Barthes’ “Death of the Author”. It reads like one chapter in a longer paper about fandom, so I’m actually considering fleshing it out a bit into a longer piece because I need to do way more foregrounding in order to talk about fandom and the 50SoG phenomena.

The other paper, my baby, is a 27-page-long paper that applies queer theory to the notion of queering Batman via subtext and text. It’s such a good paper.

Unfortunately, it’s a paper I’m not sharing with people outside of a small circle because I plan to workshop it and turn it into a paper that I can send to academic journals and turn into a conference presentation. But once I do the presentation powerpoint, I’ll probably make that accessible to people who ask. (I’ll be making my works cited page accessible this weekend at the earliest.)

Speaking of conference presentations: I did my first one in April! I did! I forgot to well… post about the experience, but it was fantastic. I did a presentation about Padmé Amidala and how her arc in the prequel series was designed from the start to end in her being killed for Anakin’s manpain, how she loses her personal and political power as he gains more and more power. If I can find a way to record myself giving the lecture as I present the power point, I’ll do it and post it. I’m also planning on posting some slides for the presentation once I have the time as well as an audio clip of me lecturing through some of the parts.

So with getting STRAIGHT A’s in all of my courses, this means that I’m officially (probably) off of the academic probation that necessitated much of my tearful panic this semester. I’m officially a grad student!!!

I need to actually write the Padmé paper. Seriously, I have the introduction written and my subtopics laid out, but when it came time to write the paper and I realized that I was looking at writing a twenty page paper (at LEAST) in less than a week. But I have time this summer and I’ll get on fleshing the paper out then.

I’m considering writing a serious paper about the Grayson comic series and its subversion of misogynistic tropes via a gaze that is not inherently straight and male. Kristen L. Geaman, who edited a collection of essays on Dick Grayson for Robin’s 75th Anniversary, brought the idea to my attention and once I go back on tumblr and you know… respond to her messages, I’ll start planning for that essay.

Next semester I’m taking three more classes. Two are set in stone, but I’m considering switching one of my classes so that I can take a class with a professor that my friends really love.

I think I also have to start writing my thesis, but I’m not sure how this works. I’ll ask in August!

I also plan to attend at least one conference this coming semester so if you know of any pop culture conferences in the US this fall that might be a good place for someone looking to yell about Batman or Star Wars, let me know!

I have a part time job! It ends in the middle of the summer, but still… it’s more than I had before that! I’m working with two business professors on editing a book for Routledge and when it’s done, I get an assistant editor credit in the book itself!

I’m also slowly trying to put myself out there as an actual freelance editor. I mean, I love writing so much, but I think that my real passion is telling people how they can make their writing even better. So … that’s a thing. So if you see me sharing posts about my editing “business” on social media, please share them for me!

In about ten minutes, I’ll be applying for an internship at a literary agency in NYC. This is huge because this is what I want to do with my life. I want to be a part of the publishing industry and make inroads on actually diversifying the books that the industry touts as their next big thing. I hope that I get the internship (once I send in my application) because it’s something that I really want to do. AAAH!

I’m also going to learn how to drive. Not technically a career goal, but still…

Okay, no. That’s a bad answer. In all seriousness, I have a lot of writing that I want to do and hopefully, I’ll be able to get to some of it. Here’s what I want to do/plan to write this summer:

Wow… that’s a lot of stuff for me to write. HM.

After this month, I won’t have steady internet access so I’m trying to queue and draft up as much content as I possibly can right now.

I also think I’m going to suck it up and just start posting original fiction to my blog. I don’t think I’m ever going to make serious money off of my short stories (which are largely romantic fantasy and super fluffy) and my attempt to hoard stories for this mythical collection I’ve been planning for a year is kind of pathetic at this point too.

So there’ll be Patreon exclusive fiction and stories that I share on my blog. Which works for me.

I’m also going to seriously look into podcasting/vlogging with my nieces over the summer because it’d be a fun bonding experience and they’re all brilliant.  This month I’ll be investing in a webcam and headset for that purpose.

Thank you for sending me pictures of cute animals or babies. Thank you for holding my hand and saying “shut up, you’re brilliant” as I panicked about whether or not I even deserved to be in my program in the first place. Thank you for the hugs (both virtual and physical) that you gave me when I was freaking out.

Thank you all so much for having my back and being patient with me as I struggled through this first semester.

Thank you for believing in me.

Thank you for caring about me.

I truly adore and appreciate all of you more than you know.

Zeenah writes about comics, nerd history, and ridiculous romance novels when not working frantically on her first collection of short stories and complaining about stuff. One day, she'll settle down and write that novel.
View all posts by Zeenah →
This entry was posted in Stitch Offline and tagged acadeic goals, grad school, stitch in real life, writing goals. Bookmark the permalink.

5 Responses to End of Semester Gushing + Plans for the Future