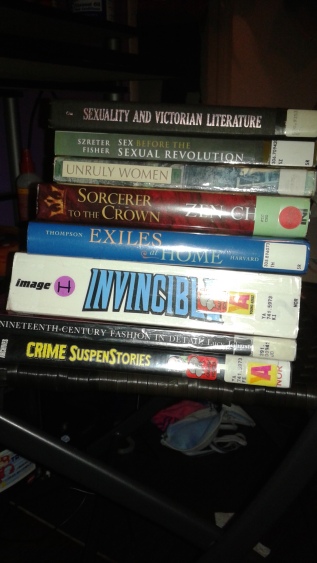 Yesterday was my second attempt at getting the books I need for my story. I actually got a lot of good books for research day part two and a couple of books that are just for fun.

I’ve come to terms with the fact that my story will be superficially similar to Crimson Peak because it’s basically the thing I’m obsessed with. And I liked the feel of the film so much– gosh.

My planned pair of siblings (The Darlings) are messed up in different ways though and my heroine is a woman of color who is immediately suspicious of the duo.

What’s been fun is that in this early part of the planning stage it’s still something I can talk about with my nieces so we’ve been talking a bit about racism and we’re brainstorming monsters and what makes people monstrous. Normally, I can’t really involve them in the writing process because they’re still so little, but since I haven’t actually decided what I’m doing with the plot and I don’t have to skip over any sexual stuff just yet, we’ve been having a blast!

I’m having a ton of fun with research and taking down notes. I can’t wait to sit down and do more of the actual writing.

Now if you’re here, you’re here for the book info so let’s get into that!

On the research side of things I got:

My story is going to be set in the last quarter of the 19th century and one thing that I need to know is what everyone is wearing and how to write them getting in/out of it. I already own a book on the daily lives of Victorians and some of the stuff is the same but I needed glossy full-color photos to kind of bring it home.

Exiles at Home: The Struggle to Become American in Creole New Orleans by Shirley Elizabeth Thompson

My main character (the young woman who winds up in this sort of shady relationship with the Darlings) is biracial I wanted to make sure that I appropriately looked at racial politics in New Orleans at that time. Sure, I’m writing a bastardized take on the Southern Gothic Horror genre, but some things I want to get right more than anything. This is one of them.

Unruly Women: The Politics of Social and Sexual Control in the Old South (Gender and American Culture) by Victoria E. Bynum

I have tons of books about sexuality in the Victorian Era (because my local library is not the best at getting me similar books on America’s Gilded/Reconstruction/Etc Age) but I wanted to look at sexual attitudes in the South because I think I could kind of smush what I’ve learned from the other books and come up with something that both makes sense and is relatively accurate.

Sex Before the Sexual Revolution: Intimate Life in England 1918-1963 by Simon Szreter and Kate Fisher

I’m actually not likely to use this except as a reference point for how people’s intimate life will change as time goes on. It’s like forty years after my story at its earliest point so it’s not super relevant but I wanted to take it out anyway just in case.

This is for reference. Am I writing similarly to these authors? Am I subverting sexual tropes in Gothic Horror and its literary descendants? Would [classical Victorian author] spin in their grave if someone read my story over it? That sort of thing. I also got it because there’s stuff about Oscar Wilde and I can’t stop researching him despite never needing this information.

So those are my research books. I still have like five books on request so I’ll try and get them on Thursday/Friday if I can. I want to get all of the research done from now so I can’t be bogged down by the internet later, you know?

Up next are the “just for fun” books:

This book is so big (it’s FIVE FREAKING POUNDS) that I could kill a guy with it. It’s just over a thousand pages long and I hit the halfway mark like ten minutes ago. I got it yesterday, obviously.

I don’t talk about it (and I have no idea why) but Invincible is easily one of the best comics out there. It’s also one of my favorites because its take on superhero lives feels fresh and I love the characters.  It’s not for everyone like it’s SUPER gory and there are some heavy topics covered that have definitely left me reeling and kind of angry, but it’s such a good book omg.

Sorcerer to the Crown: A Sorcerer Royal Novel by Zen Cho

I have only read the first chapter so far but I’m in love with this book. Gosh. It’s going to take me a while to read it (because I need to savor every single sentence of course) but when I do finish it, expect lots of excitement. Do you know how happy I am that my hold on this book FINALLY came through? Bless the library. And Bless Zen Cho.

I got into these comics because of my mom and like Tales from the Crypt I feel like it’s our link. Like she read these when she was a kid and now I’m reading them. I also really like older comics and looking at how perceptions have changed. I’m still picking at this initial post for the article series I’m supposed to be doing for Word of the Nerd but after the Thrillkiller I’m going to focus on doing one about this specific hardcover because crime comics from my parents’ childhood are my thing.

So there you have it, my library haul for this week. Well… the first part of it since I’m probably going back by the end of the week. What are you reading?

Zeenah writes about comics, nerd history, and ridiculous romance novels when not working frantically on her first collection of short stories and complaining about stuff. One day, she'll settle down and write that novel.
View all posts by Zeenah →
This entry was posted in Library Haul and tagged comic books, history, libraries, new orleans, race, reference, research, victorian era. Bookmark the permalink.