[This recap/review contains images of mid blood/gore, and brains.

In the interest of full disclosure, there’s something that you all should know about me: I’m not a zombie fan. I cringe through my older sister’s recaps of The Walking Dead and have actually walked out of rooms if there are zombies on the tv screen. I can watch nearly every other type of horror subgenre with little to no issue, but zombies are where it stops for me.

The thing with iZombie is that I really and wholeheartedly love DC’s tv series. Aside from Gotham (which I got into late so I gave up on it), I have yet to find a DC series I didn’t like. I even own all of the Smallville DVD box sets. Yeah, DC has me hooked on their TV series.

So despite how terrified I am of zombies, I kind of had to watch iZombie and you know what? It’s really good.

So good that despite the fact that I’m probably going to have to rewatch that Neil DeGrasse Tyson clip about how zombies couldn’t actually exist in real life just to make it through the night, I’m going to be watching episode two next week.

Now, onward to the recap!

Well, not at the beginning where Liv looks as if she has it all (a good job, a cute and dorky fiance, and a great lead into her ten-step plan), but where her life kind of falls apart after the zombie attack that changes everything. Because aside from the whole “zombies on a boat thing” (and how I dearly want an explanation for that), who can’t relate to something utterly awful derailing their life’s plans? 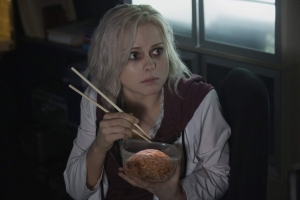 Sometimes it’s losing your job out of the blue.

And sometimes, it’s a zombie attack in the middle of nowhere and then developing an unending craving for brains.

I feel like this show really captures some of the hopelessness that millennials can feel (but you know, with zombies and supernatural crap all over the place).

So I’ve never read iZombie. I heard of it and was lowkey interested but cowered from the actual zombie aspect. So I didn’t know about the whole thing where Liv gets visions after eating brains, but I like it. It makes sense and makes you think about how we kind of are what we eat.

The series mixes genres a bit, humanizing zombies (and boy is that a phrase I never ever thought I’d say that phase) and also mixing the typical procedural with buddy-cop comedic moments and your familiar CW romance drama. It’s so weird that it works as well as it does, but it does.

My one complaint is about Liv’s friends and family. The series starts properly five months after the attack that changed her into a zombie. That’s five months of changing, coming to terms with her life, and eating brains. All of that is off screen (so far). What is onscreen is how her friends and family members really don’t get how to help her. 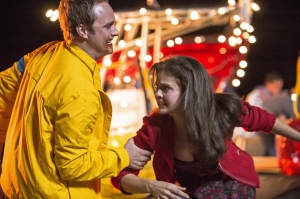 Part of what’s super relatable is how Liv is living (or… not living) with a disease that saps her motivation, makes her alienate people, and which doesn’t have an easy cure.  As someone with depression, like… this was a pretty big deal (because let’s be real, I have a feeling that the zombie factor only amped up Liv’s response to her trauma because we’re probably going to see zombies that aren’t depressed and in a slump — look at that jerkwad in the yellow that scratched her).

The parts of the series’ pilot that I was most uncomfortable with weren’t the scenes of Liv eating brains or even the boat attack at the beginning. It was the scenes where we had to see Liv’s friends and family get on her case for being different. They weren’t even supportive like “Okay maybe she has PTSD but we’ll be there for her in case she needs us“.

I loved the ending. I liked that we did get to see Liv go all undead Red Hulk on Pratt because it was super bad ass. I was expecting to see something with increased speed like her running after the car, but watching her punch out a windshield and get ready to chow down got me all excited.

And then, we got some more tidbits about her physiology. She… doesn’t heal like people do? I’m not sure if they brought that up when the second-to-last scene of the pilot was going on but I didn’t feel that she was healing. We’ll see.

But the end of the episode wrapped up the plot while giving me loads of questions.

“Hey, is that jerkass from the party?”

“Is that last vision showing something from before she got bitten or after?”

And many others. Some so silly that I’m not comfortable sharing them with you all.

But the important thing is that I’m super jazzed about the show.

To wrap up, here are a few things I absolutely loved about the pilot and a few things that I could go either way on:

I give the pilot for iZombie 4.5 out of 5 stars! It’s a darkly funny story and I’m looking to the way that the story progresses. And Liv is the cutest zombie ever! I love her! I love the characters so far and I’m looking forward to seeing how they grow and what sorts of trouble they get into!

Zina writes about comics, nerd history, and ridiculous romance novels when not working frantically on her first collection of short stories and complaining about stuff. One day, she'll settle down and write that novel.
View all posts by Zeenah →
This entry was posted in TV Recaps/Reviews and tagged DC Comics, iZombie, recaps, The CW. Bookmark the permalink.
%d bloggers like this: