Pretend this review went up uh… yesterday as I lost track of days again… Please and thank you. 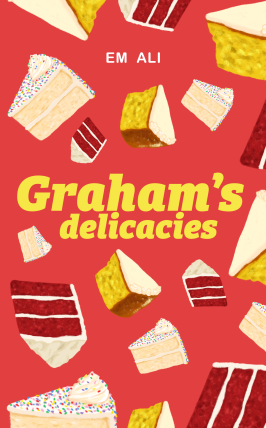 Em Ali’s Graham’s Delicacies is a super cute follow-up to her previous book Soft on Soft. This collection is home to a trio of interconnected stories about the various intimate relationships between the people work at the titular bakery.

I got a copy of the collection from the author in exchange for an honest review and the chance to read a book about non-binary cuties, so let’s get started by diving into the stories!

Saccharine, the first story in this collection, certainly lives up to its title, that’s for sure. This story in the collection revolves around nonbinary baker Emilie Albright and their relationship with Jen Snider, a bisexual babe that works at the front of the bakery. Reading about Jen and Emilie dancing around each other and fumbling their way into a deeper friendship and romantic relationship is just… *chef’s kiss* delightful.

I’m a sucker for sweet schmoop and this story delivers.

In Delectable, things change for James Reyes after he lets loose at an after-work hangout with his coworkers from the bakery leas to him waking up in his coworker-crush Sam Rogers’ bed with a hangover. James is the straight-laced supervisor at the titular bakery and he’s had a crush on Sam for ages. After Sam tags along to the Reyes sibling brunch, there’s a noticeable shift in their dynamic and James starts to open up to the other man. There’s just so much pining in this story and it’s all resolved deliciously by the very end.

Finally, there’s Ravenous. This final story opens with a scorching sex scene between Alex Peltier, the second baker at Graham’s Delicacies, and Kang Yujin, a one-night stand that turns out to be a famous food vlogger that dissed their bakery. Personality-wise, Alex and Yujin are as different as night and day and it shows in how Alex is quiet and snarky while Yujin is super sunshine-y.

I think that while I found things to like (or even love) about the other two stories in the collection, this one might have been my favorite partly because of their dynamic and the way that Yujin tried to woo Alex.

All in all, Graham’s Delicacies is generally a super cute and, dare I say, “fluffy” read that I enjoyed even though some of the prose is a bit clunky at parts. It’s just such a freaking adorable book that I definitely found myself getting God Tier Goopy ™ over so much of it!

If you like fluff-filled romance, consider giving this collection a read!

I tried my hand at making an aesthetic for Yujin and Alex’s story in Canva! I always like… panic my way around aesthetics but I wanted to like… try. You know? Because I liked their story a ton!

Content Warnings/Notes:  (I’m pulling this from the list at the start of the collection!!) vomiting in the second chapter of Delectable and mention of a parent’s death in its sixth chapter, Alex gets misgendered in the third chapter of Ravenous and they tell Yujin’s parents about losing their parents in the sixth chapter.
Are There Sex Scenes/Sexual Content?:   Yup, and they’re explicit! In Ravenous’ seventh chapter, the sex scene has D/s elements.
What I Liked Most About It:   the detailed list of content notes at the beginning, Jen’s dislike of bras, the sex scenes do a good job of balancing sexy and sweet, it’s all just so freaking queer, it’s trope-laden in a familiar way, I was promised nonbinary babes and this book delivers TWO OF THEM with Emilie and Alex, there’s like a cleaning montage (or the text equivalent) in Ravenous, the Halloween-set epilogue!!
What I Could’ve Done Without:  Not so much a “I could’ve done without this” thing but a “I wish there’d been more of this” thing: I personally could’ve used a few more detailed descriptions across the different stories (of like various things including character descriptions and some of the sex scenes/sexy moments), the single use of the word “zaftig”
Where Y’all Can Buy It: Amazon | Kobo
Author’s Website/Social Media:  Em Ali @ Twitter
Rating: Recommended