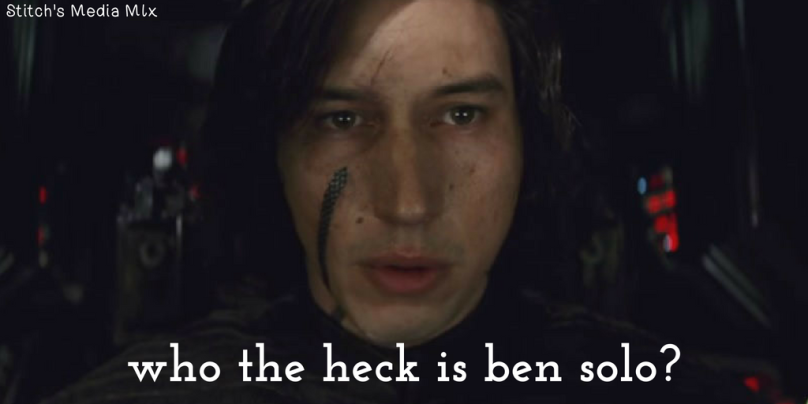 In the past couple of months, there have been several tweets from twitter users with the hashtag “SaveBenSolo” because Ben Solo, should be protected and should survive Episode IX and if you don’t want that, then you’ve got no empathy to speak of.

Many of these posts are also tagged with “Reylo” (because saving this “Ben Solo” character seems contingent on Rey doing the saving despite him shutting her down in the last movie) while others claim that Ben Solo needs to survive because he is, as far as we know, the last surviving Skywalker. They use Leia’s distraught internal monologue over her “lost” son in Jason Fry’s novelization of The Last Jedi to paint a portrait of this Ben Solo as a mythical and magical boy, caught helplessly between destiny and other people’s desire for power.

Ben Solo, fandom argues, needs to be saved because he is the last, the best, the least responsible for his actions, and the most sympathetic…

But who the heck is Ben Solo?

Fandom’s Ben Solo is not the same figure as the character that would become series’ villain Kylo Ren. Despite the fact that they share some similarities (such as Han and Leia as their parents and Adam Driver portraying them), fandom’s Ben Solo has next to nothing in common with the character in the films and the first novelization.

Where Kylo Ren turned to the First Order and fascism pretty eagerly as he was already radicalized when Luke sensed the darkness rising in him and thought about killing him… Ben Solo was brainwashed, manipulated, and/or forced to work for Snoke’s organization.

Where Kylo Ren’s interest in Rey seems directly related to the power that Rey’s presence at his side can provide him, Ben Solo adores her. He wants nothing more than to help her grow, give her the agency that others supposedly deny her, and keep her safe. 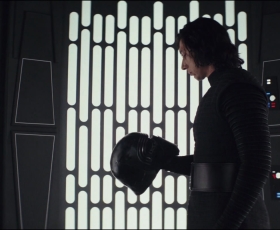 In The Last Jedi, Kylo Ren seems comfortable with wiping the other two Skywalkers off the map. He wants Luke dead and he doesn’t care enough about Leia to do anything the two times her death appears to be imminent.

In fact, Kylo Ren’s whole thing is summed up when he tells Rey to “Let the past die. Kill it if you have to. It’s the only way to become what you’re meant to be” because that’s his mantra.

Ben Solo on the other hand, is the last Skywalker and absolutely determined to change that. He wants Rey to love him and help him heal and all he really wants is to fix things and have little Skywalker babies.

Kylo Ren is a violent, tantrum-throwing, manchild who oozes toxic masculinity from his pores as he treats Rey like a prize to be won or territory to be conquered. Her humanity and her desires for the future don’t matter at all.

Ben Solo is gentle and confused. He’s not angry, he’s just… lost. Any toxic masculinity he exudes is the fault of other men – men like Luke, Han, or Snoke – and he just needs a little Rey-loving to calm down.

Kylo Ren scoffs at the idea of redemption or turning away from the First Order in The Force Awakens and The Last Jedi – where he ends the film as the de facto leader of the organization.

Ben Solo deserves a second, third, fourth, and fifth chance at smacking Rey’s hand down when she offers it to him along with a plan for him to return to the light. Maybe if she keeps working at it, he’ll bow to her and do what he’s always been supposed to.

The thing about “Ben Solo” is that he doesn’t exist.

I mean, he’s even less real than all the other fictional characterization in the Star Wars universe because he’s a character made up by fans (and Rian Johnson), people that couldn’t handle the fact that the “last Skywalker” was a whiny puppet for a fascist organization and that the only character Rey showed open adoration for, Finn, was Black.

Fandom’s “Ben Solo” is given a personality, backstory, and relationships that he doesn’t have in the movies.

Ben Solo has Finn’s backstory of being kidnapped into the First Order at a young and vulnerable age. He has Finn’s personality, his relationship with Rey, and co-opts the mutual adoration that he and Rey have for each other.

That’s not super surprising considering that I’ve seen images where Finn is literally cut out of scenes he shares with Rey and replaced with Kylo – I mean fandom’s Ben Solo – shared across fandom spaces by Rey/Kylo shippers.

Fandom’s Ben Solo, the guy you see named in articles across the internet and written/drawn into romance with Rey, is a mishmash of tropes about “Bad Boys” and villains held together by fandom’s underlying disinterest in (or outright hatred of) Black characters that are in “too close” a proximity to white characters.

One’s a vaguely interesting villain with the potential to be terrifying that has, as of The Last Jedi, gone under-explored in favor of trying to canonize his woobifcation (thanks Rian!).

The other is peak white villain woobification combined with a hefty dose of fandom racism.

2 thoughts on “Who the heck is Ben Solo?”