Headcanons only go so far when it comes to representation 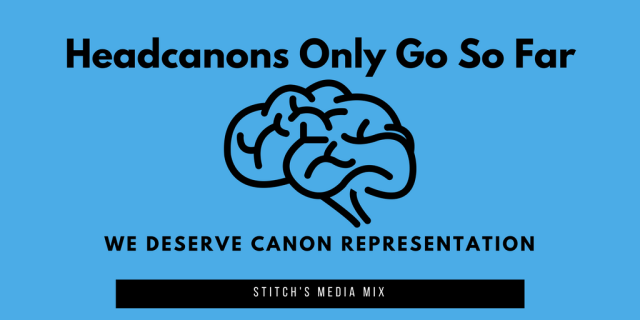 In my head, my version of Harvey Dent will always be associated with three things: his Blackness (he’s biracial), his bisexuality (he was totally in love with Bruce Wayne), and how he deals with/manages his mental health issues (which are far more detailed than “spooky split personality” crap from the comics/other media).

None of this is canon even though I used canon to build my mental image of the character.

My Black Harvey Dent comes from Billy Dee Williams’ portrayal of the character in film as well as the character’s appearance in Batman: The Animated Series.

His mental health issues and the fact that my Harvey sees a therapists and takes meds to manage his health issues stems from my anger at the way that the Batman series has typically handled the Harvey/Two-Face split in ways that were just beyond ableist.

Well… I just really loved the idea of Harvey having this sweet but cracked relationship with Bruce that developed from their time in high school and simply couldn’t handle the pressure of Bruce’s Mission and Harvey’s drive to succeed. He winds up being Happy For Now ™ with Gilda and Bruce is like “the one that got away” for him.

Even though I’ve based my headcanons on existing canon and could probably make a pretty solid argument for the canonicity of my work (or a straight up queer reading of the character the way I’ve done with both Bruce Wayne and the Joker for my MA program), that doesn’t make it canon.

My belief in a queer, mentally ill, and Black Harvey Dent doesn’t excuse the fact that DC has maybe two dozen queer characters at most. It doesn’t make the hypermasculine heteronormativity of the past relationships present in Batman comics any easier to bear. It doesn’t change the way DC handles disability and mental illness.

It doesn’t provide representation to anyone reading the comics or watching the films.

I know that’s harsh, but it’s the truth: for the most part, headcanons don’t become canon and they can’t provide necessary positive representation for audiences starved for that chance to see themselves in the characters they love.

When I write him, my queer, Black version of Harvey Dent makes me feel represented, sure. I love writing him and the only thing that stops me is that no one else seems to care about this take on Harvey in the same way that I do.

However, it doesn’t change the character in canon.

It doesn’t stop DC Comics and its various writers from relying on harmful stereotypes about people with mental illness. It doesn’t stop the company (or many companies) from viewing racebending as something that the only do in small amounts with token characters.

It doesn’t suddenly give bisexual, biracial, and mentally ill people the meaningful representation that they need and deserve.

No matter how many words I write or how popular the headcanon gets, it’s not going to change the fact that representation for these people is lacking.

I don’t enjoy taking about the fact that headcanons only go so far.

I hate being reminded of the fact that even when supported by the canon content creators or widely shared or approved by fandom, headcanons only go so far.

In J. K. Rowling’s Harry Potter and the Cursed Child, we finally got our Black Hermione. Only… We didn’t actually.

Hermione isn’t Black in canon and there’s nothing that confirms it. She’s white in the books, in the movies, and, following the originating actress’s role in The Cursed Child, she’ll probably be white there too. No matter how many times Rowling claims to support a Black Hermione, it doesn’t change the fact that there are maybe only two actual Black women in the main series of Harry Potter books.

Trying to claim a diverse headcanon as canon – especially to the point of giving the content creators props for their supposedly brilliant work at representation — does fans a disservice.

From top to bottom: Stiles and Derek (“Sterek”) from Teen Wolf, Kara Zor-El and Lena Luthor (“Supercorp”) from Supergirl, and Keith and Lance (“Klance”) from Voltron Legendary Defender. None of these ships are canon or even suggested in their respective shows.

Fandoms for shows like Teen Wolf, Supergirl, and Voltron Legendary Defender claim at least one headcannoned queer couple as canon. They talk about how Stiles and Derek in Teen Wolf had an intensely intimate relationship, complain that Lena Luthor and Kara Zor-el’s relationship is queerbaiting in the show, and claim that Keith and Lance in VLD are “basically canon”.

When someone talks about wanting or demanding representation (for example, queer superheroes), claiming queerness in superheroes like Captain America (“he’s gay but still closeted”) or Blackness in Hermione or Lex Luthor (look…), gives the narrative too much credit.

This sort of thing is also harmful to me because of how it straight up lures marginalized people into supporting media that does not care for them or their need for representation.

Telling folks that Poe Dameron is canonically gay gets queer folks to go looking towards the Star Wars franchise as one where queer representation is in the open on the big screen.

His relationship with Finn remains frustratingly platonic in canon and the only character confirmed queer in The Last Jedi apparently doesn’t have her supposed queerness confirmed or referenced in the film itself (it’s from a side novel in the Journey to The Last Jedi side-series).

Telling folks that Captain America is gay ignores the fact that Marvel literally doesn’t give a shit about queer people (as a company, mind you: individual creators and books may vary).

I can read Steve Rogers as queer all I want (and I do), but that doesn’t mean that he’s ever going to be queer in the comics. I think it’d be easy to read queerness into his relationships with basically… everyone, but it’s 2018 and I’m pretty sure that Joey Gutierrez is the only explicitly and openly queer main or supporting character in the MCU so far – and not only was he only on Agents of S.H.I.E.L.D., but he left S.H.I.E.L.D and the series after season three.

The response to the hashtag “GiveCapABoyfriend” on twitter was in turns mocking and dismissive. Marvel higher ups didn’t even pay lip service to fans or acknowledge the trending tag… because they’re not going to make an icon of heteronormative masculinity queer.

And that’s the thing, claiming headcanons as canon or fact gives these pieces of media an audience that many of them didn’t plan for, don’t intend to plan for, and that they don’t deserve.

Occasionally, I know that we get that sweet spot where headcanons and canon collide and we get that representation we’d been clamoring for.

Brooklyn 99’s confirmation of Rosa Diaz as a bisexual woman.

Fandom championed the heck out of Rosa’s (fanon) bisexuality. From day one. Rosa was headcanoned and described as being bi. Nothing about the show seemed to confirm anything and despite the fact that B99 already showed itself to be open to main characters who are queer (Captain Holt is gay and married), there didn’t seem to be any sign that the cast/crew heard us beyond Rosa’s (bisexual!!) actress co-signing the whole thing (and look, a lot of actors cosign queer readings and/or a desire for queer rep that winds up going nowhere)…

And then, just a few episodes ago, they did the thing.

They had Rosa come out as bi and say the dang word. They validated fanon by having Rosa be bisexual and they absolutely gave nods to fandom. Fandom said Rosa was bi and then… she was (after like four seasons, but still).

What usually happens is that fandom gets its hopes up, it gets other fans’ hopes up, and then we get disappointed.

I know so many people who got into Teen Wolf or Voltron Legendary Defender because they were told that the popular slash ship in fandom was in fact canon.

In both shows, the two characters that make up the core slash ship whose base dominates the fandom have a mildly antagonistic relationship – but they barely interact with each other otherwise. There’s no queer coding, no flirtatious behavior, and no kissing. Just… the occasional snark when the characters even interact with one another.

(In the case of Teen Wolf, some parts of fandom legit lost their shit over the fact that the “wrong” couple had a gay sex scene despite the fact that the “right” couple never so much as smiled at each other – and weren’t a couple to start with.)

Imagine seeing this queer powerhouse of a ship and everyone who ships it is like “this is the best part of [show/book]” and you’re hooked by the fan content. When you go to actually support the source media – most likely spending your own money to do so – all you get is…

And that’s kind of the norm.

I think diverse headcanons and close readings are valid ways for fandoms and fans to find representation.

I don’t know where’d I’d be if I couldn’t turn to fandom for the representation that I am frequently denied as a queer Black person. Fandom isn’t perfect and I know that firsthand as someone who chooses to talk about the imperfections, but the headcanons and close readings we do in these spaces as amateurs and professionals alike still matter. They’re still meaningful.

They just don’t mean what we (and wider fandom) think they do.

It honestly doesn’t matter how many thousands of folks see a headcanon circulate about Black Hermione, Bruce Wayne being trans, or that enedless amounts of characters are queer in endless other amazing ways… It’s not canon.

Claiming canonicity for these diverse headcanons helps no one.

Not when the source material so rarely matches up with the headcanons.

Instead of telling fandom that Destiel is canon or that they should support a book where the queerness supposed to be canon is unfulfilled subtext alone, why not work on supporting the content creators already giving us diverse media representation and urging the big companies to step up and do the work? Why not support diverse media and the diverse creators doing the work?

Headcanons only go so far when it comes for representation.

Media companies and content creators need to (be made to) do the legwork instead of simply patting themselves on the back for the meals we’ve made out of the crumbs they’ve scattered for us.

Zina writes about comics, nerd history, and ridiculous romance novels when not working frantically on her first collection of short stories and complaining about stuff. One day, she'll settle down and write that novel.
View all posts by Zeenah →
This entry was posted in Fandom and tagged fandom, headcanons, Queer representation. Bookmark the permalink.