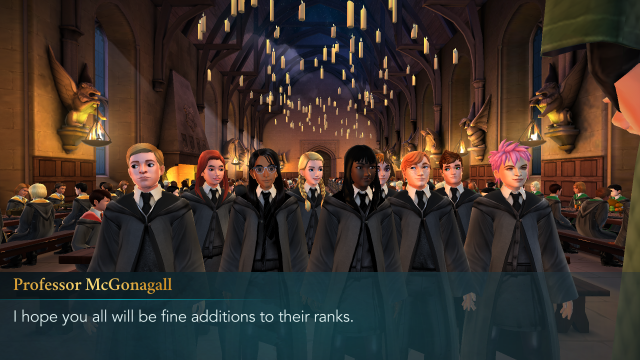 Y’all know my complicated and frequently critical feelings about J. K. Rowling and the Harry Potter franchise, but man… Hogwarts Mystery is kind of almost what I wanted from Pottermore when that was first announced.

So of course, I had to play it.

Set after Voldemort’s defeat at the hands of a baby Harry Potter – but well before the main series – this video game puts you in the footsteps of an original character who is intent on finding out what happened to their older brother who went missing after being expelled from Hogwarts.

I used one of my OG Potterverse OCs, my girl Ginger Hastings, and started playing.

So far, the Hogwarts of Hogwarts Mystery is a bit more visibly diverse than the Potterverse as we’ve seen it so far. My Ginger, of course because I’m me, is Black. Her best friend Rowan is of Indian descent. There are little brown kids wandering around in the crowds and hallways.

Snape is, somehow, the most iconic Hogwarts professor so of course he’s a huge focus of this game.

He’s also (still) a huge asshole who puts his favorites first and bullies children even in his own house.

If you weren’t sure that Snape never should’ve worked with children or been allowed near them after seven books and eight films, well this game absolutely solidifies how unfit he is as an educator. He remains unfair, uncaring, and someone that I wouldn’t trust to teach a skunk how to spray.

What’s a bit… distressing is that because I chose to make my Ginger a Black girl, I get to watch Snape and the Slytherin bully Merula mistreat a Black girl. The optics are… not great and it’s what usually happens when I play video games because I always play as a Black girl when I can.

On top of that, the game’s fun and I care about the mystery developing, but this game is super slow and it’s kind of an obvious moneygrab with plenty of need for microtransactions if you don’t want to spend hours waiting for your energy to refill or for a quest to unlock.

I started this quest HOURS AGO

I’ve been waiting four hours for two separate parts of a quest and I still have two and a half hours left before I can get to the third part. Of course, if I drop 48 gems/$1.98, I can have that unlocked right away. Some of the quests and classes take about an hour, but eat up potentially more energy than you can refill in an hour – especially if you start with less than a full bar. So that’s something else you get to possibly spend money on.

I don’t know if I’ll keep playing Hogwarts Mystery. I just don’t do well with games that essentially demand you spend money to get further, faster. Either I’ll get bored and forget the game exists since I’m spending so much time waiting to get energy/gems or I’ll spend money I don’t have on a game that I’m not even sure I’ll like further on.

But hey… at least my avatar is cute.

Zina writes about comics, nerd history, and ridiculous romance novels when not working frantically on her first collection of short stories and complaining about stuff. One day, she'll settle down and write that novel.
View all posts by Zeenah →
This entry was posted in Book Talk and tagged Harry Potter. Bookmark the permalink.
%d bloggers like this: