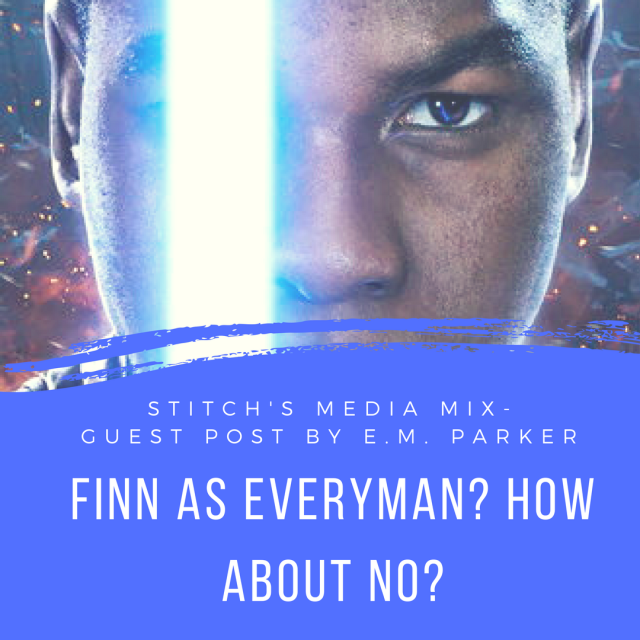 After the release of The Last Jedi, there was a noticeable shift in how members of the general audience discussed Finn – if they talked about him at all. People who resented his inclusion in The Force Awakens – viewing him as a sign of P­C culture run amok or as an extra whose sole purpose was to diversify the cast – had little to say this time around, likely because his marginalization in the series’ latest installment merely served to confirm their negative view of his place in the trilogy.

Instead, it was those viewers who claimed to like Finn whose tune changed.

As it became clearer that Force sensitivity would never be part of his arc, at least not in this segment, there arose a collective sigh of relief from certain quarters: “Good! He doesn’t need to be Force sensitive to be important. Let him just be Finn. Let him just have a blaster and kick ass that way. Let him be the everyman the audience can relate to.”

Except that – to paraphrase Luke Skywalker, as he faced off against Kylo Ren in The Last Jedi – “Amazing. Every word you just said is wrong.”

In Star Wars, the Force users are front and center, be they Jedi or Sith. The universe is constructed so that these magical unicorns of the galaxy are presented as the true stars of the show. Yes, there was Rogue One, with its team of non-Force sensitives, but they all died carrying out their mission, their names essentially lost to history.

And the film that was supposed to be about their sacrifice ends, perhaps unironically, with two Force-sensitive Skywalkers: Darth Vader and Princess Leia Organa – as if fans of the series needed to be reminded, in what was ostensibly a celebration of the “everyman,” of who it is that really matters in the Star Wars mise en scène. 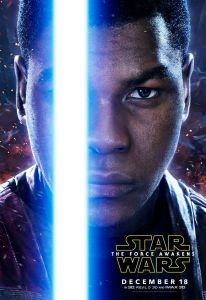 From the time J.J. Abrams cast John Boyega as Finn in The Force Awakens, the criticism was nonstop – and undeniably racist. The strategy unleashed by far too many in the sci-fi and pop-culture loops tends to take an all-too-familiar tack: belittle, diminish, and, if that’s not enough, simply ignore.

But when John began appearing, lightsaber at the ready, front and center in all the marketing for The Force Awakens, the filmmakers seemed to be signaling a turn, finally, toward racial progress in our one and only true universe. This black young man was going to be one of the people who mattered – a Force sensitive, a Jedi, the star of this show.

No longer would anyone take as serious the belittling of a character who was the focal point of the new series and a Force sensitive Jedi-in-training, to boot. His Stormtrooper origins? They just added to the allure. The storyline seemed clear: Here was a man whose latent Force sensitivity had allowed him to break free of the abuse and brainwashing endured since birth. Clearly, he was grounded on a path toward garnering his powers and reaping the glory that would inevitably follow.

Except, of course, that didn’t happen. Finn, as it turns out, was merely a diversion, a shiny-new object twirled in the director’s left hand while his right unveiled the real Force user, none other than Rey: young, female – and white. Those hints that Finn had some Force sensitivity have since been written off as – of all things – a sound-editing error. And John himself has vented about the bait and switch, which suggests that, as conceived, his character was never intended to be Force sensitive or a Jedi.

Back in the real world, if this plot (un)twist is allowed to stand through Episode IX, it could prove to be disastrous at the box office, for Finn is not just another character to be written off (or out). What the powers-that-be seem to be missing is that in his newness – and, yes, his blackness – he represents a new generation much more comfortable with diversity (racial and otherwise) than the generation behind this franchise’s cameras. To this younger international audience, Finn’s rise points to a New World and a new vision, one distinctly different than that of a 40-year-old fairytale that has been almost entirely white and male.

Sure, there are those fans who felt an ego boost upon learning that Finn was not Force sensitive after all. Their argument centers on the need for a heroic everyman, someone they can relate to, someone like Han Solo, not Force sensitive yet one of the series’ most iconic figures.

But let’s face it: Harrison Ford makes for the ideal male pop-culture character – tall, white, conventionally handsome with an effortlessly wry sense of humor. He’s that mythical rogue with a heart of gold who inevitably saves the day and wins the heart of the beautiful princess.

Now juxtapose him with Lando Calrissian, played by Billy Dee Williams in The Empire Strikes Back and Return of the Jedi. Lando, too, was tall, conventionally handsome, and effortlessly charming. A reformed rogue who assumed the responsibility of protecting a city and its citizens, he makes a mistake, spends the better part of two movies atoning for it and, in the end, emerges a hero.

Yet there is no groundswell of support for Lando as everyman. In fact, when his name is brought up, the word “traitor” generally follows, as if, you know, that little destroying-the-second-Death-Star thing never actually happened. Sure, some people will recall Lando’s smooth delivery – perhaps conflating the character with the actor’s persona in his old Colt 45 malt liquor commercials – or they’ll cite his friendship with Han Solo and his apparent love of theatrical capes and dismiss him as a “character it would be fun to see,” but ultimately inconsequential – at best.

But, really, what’s the most obvious difference between Han Solo and Lando Calrissian?

To be neither white nor male is already considered an act of aggression in popular media. TV shows like Still Star-Crossed and Pitch have been ripped as unrealistic not because of their storylines, but because they revolved around nonwhite, nonmale characters. For decades, characters portrayed by people of color were regarded as part of the scenery: the sassy BFF to the white ingénue in a romcom, the relentlessly cool dude whose “hood wisdom” is seemingly always misunderstood by the white protagonist, usually with hilarious consequences.

Here’s the thing, though: These are not “everymen”. They are caricatures. And what those who insist that Finn’s character would be ruined if he were revealed to be Force sensitive are really saying is that they need him to fill the role of the background black guy with whom they’ve grown so comfortable. They remain ever so clueless that their argument smacks of “I know I’m not racist because some of my best friends are black”.

And so the audience feels justified in laughing at Finn’s expense as he stumbles about in a leaking bacta suit or gets tazed or is led around like a child in unfamiliar surroundings or nearly falls into a pile of animal shit.

No Force-sensitive character has ever had to endure such humiliation. Can you imagine Luke nearly doing a face plant into bantha crap? Or Obi-Wan being electroshocked by an alleged admirer?

Fans reported that the moment Finn was on his knees, a recipient of an ugly smack in the face by Hux, was met with raucous laughter in theater. Could you picture a kneeling Obi-Wan getting backhanded by a fascist analogue – or, in the very off chance that such a theme would make it into a Star Wars film, fans laughing about it?

Force sensitivity in this franchise is not necessarily a guarantee of protection, not even for lightsiders. (RIP Qui-Gon Jinn and Mace Windu, among others). But no character who was presented as the main character of the series – Luke Skywalker in the Original Trilogy and Anakin Skywalker in the Prequel Trilogy – were ever given the clown edit or pushed aside for to make room for a maudlin feel-sorry-for-me arc for the villain.

Originally, Finn was presented as the face of the sequel trilogy. In fact, he was marketed as the Jedi. It was incumbent on Lucasfilm to follow through, especially in light of how nonwhite characters in this franchise have tended to be relegated to the imaginary sidelines.

In the real world, people seeking an everyman in the sequel trilogies that they can identify with need to keep looking and leave Finn out of it. Fandom is great at elevating side characters into positions of importance that generally are inverse to their significance to the story – well, as long as they’re white. So those who are hungering for a non-Force sensitive character in the Han Solo mold are free to find one in the background somewhere or create an original character for fanfiction.

And as for Finn’s ultimate fate as a possible Force user, here’s hoping that Lucasfilm and J.J. decide to do the right thing and finish what they started.

E.M. Parker is a Philadelphia-based writer, editor and digital marketing strategist who has worked with such news sites as Yahoo, MSN, and ALM Media. A longtime fan of science fiction and mystery novels, she is currently working on a collection of original short stories based in afrofuturism. You can follow her on twitter where she is @eblfinexile.

Zina writes about comics, nerd history, and ridiculous romance novels when not working frantically on her first collection of short stories and complaining about stuff. One day, she'll settle down and write that novel.
View all posts by Zeenah →
This entry was posted in Fandom, Movies and tagged Finn, Finn meta, guest post, star wars: the last jedi. Bookmark the permalink.
%d bloggers like this: