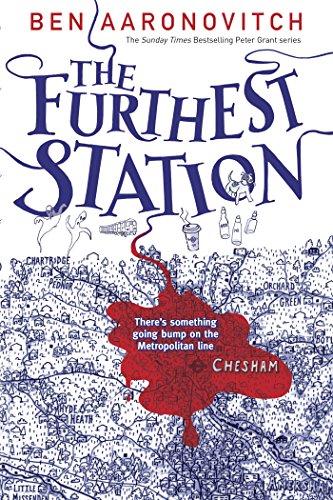 Note: I received a copy of this review from the publisher via NetGalley in exchange for an honest review. Whoo! Also this review contains mostly mild spoilers for the novella!

There have been ghosts on the London Underground, sad, harmless spectres whose presence does little more than give a frisson to travelling and boost tourism. But now there’s a rash of sightings on the Metropolitan Line and these ghosts are frightening, aggressive and seem to be looking for something.

Enter PC Peter Grant, junior member of the Metropolitan Police’s Special Assessment unit a.k.a. The Folly a.k.a. the only police officers whose official duties include ghost hunting. Together with Jaget Kumar, his counterpart at the British Transport Police, he must brave the terrifying crush of London’s rush hour to find the source of the ghosts.

Joined by Peter’s wannabe wizard cousin, a preschool river god and Toby the ghost hunting dog, their investigation takes a darker tone as they realise that a real person’s life might just be on the line.

And time is running out to save them.

With this new novella, bestselling author Ben Aaronovitch has crafted yet another wickedly funny and surprisingly affecting chapter in his beloved Rivers of London series.

So who exactly do I have to shake in order to get an entire series of young adult books about Abigail Kumara snarking her way through London’s supernatural underworld and getting into all sorts of trouble behind her cousin’s back? Because I’m ready to start shaking some people.

Ben Aaronovitch’s The Furthest Station is a novella set within the wider world of his fantastically complex Rivers of London series and is narrated by the series’ main character PC Peter Grant.

As I adore Peter Grant and have made him one of my few Book Boyfriends™, it’s no surprise that I love his continuing point of view in this novella. Aaronovitch imbues Peter Grant with so much personality and a rapid-fire wit, that his POV is an honest-to-god pleasure to read.

(It doesn’t hurt matters at all that the way Aaronovitch occasionally writes character descriptions in Peter’s POV makes it extremely easy to do a casual queer reading of the character if you’re in the mood to do so. And I am always in the mood for a good queer reading.)

The Furthest Station, as you can probably guess, has a bunch of scenes that take place in and around trains and train stations. After multiple reports of a mysterious figure harassing people on the Metropolitan Line – people that don’t remember ever making these reports in the first place, Sergeant Jaget Kumar calls Peter in because it’s the sort of spooky circumstance that my favorite wizard-in-training gets to tackle.

The adventure takes them all over the place and introduces us to a rather large amount of ghosts (when compared to the amount we’ve seen in the series so far, I guess). Also, in terms of unexpected things that happen in the novella, the “weird ghostly harassers” plot sort of expands to include a kidnapping and some other stuff like the adorable but faintly creepy Chess in Chapter 5. Like this is one heck of a busy novella, but it works.

Now don’t worry, I won’t spoil the plotty bits because it’s a genuinely fascinating plot and I know I’d fight someone if they spoiled a book like this for me.

(Seriously, it almost happened for me with Aaronovitch’s The Hanging Tree because British readers got the book November 2016 and many of them couldn’t be bothered to stop spoiling the book all over Tumblr between then and January when US readers got it…)

So let’s talk about worldbuilding in The Furthest Station!

While I’m totally invested in the characters Ben Aaronovitch writes, I’m also absolutely in love with the way he unspools little like… worldbuilding nuggets. Aaronovitch doesn’t infodump because he can’t. Peter wouldn’t infodump and he also doesn’t have the attention-span to listen to someone infodumping at him.

The Furthest Station manages to pack a lot of worldbuilding into a small, neat package. I mean the dude drops so much info that helps strengthen my image of the world Peter and Abigail live in now (and how different it is from what Nightingale experienced).

And lastly, Abigail might be my favorite thing about The Furthest Station. Of course, we’re seeing her through Peter’s point of view and that means we only see what he sees of her. To Peter, Abigail is this snarky, precocious, and brilliant teenager that basically has no fear of the unknown. The idea of the supernatural existing within the world she’s grown up with, is just… worth a shrug because it’s not a big deal to her. She approaches the supernatural way differently than Peter does because she’s a kid, but also because she doesn’t have his background.

She reminds me so much of my niecelings and I’d love to see more of her adventures with or without Peter.

The Furthest Station is great. I mean, straight up, it’s a great book. If you’re still coming down from The Hanging Tree‘s intensity, it’s such a wonderful follow up. However, it’s also a book that could bring in new audiences. If you know nothing about Ben Aaronovitch’s work, I think that The Furthest Station is a great starting point.

It’s got ghosts, trains, a kidnapping, and the coolest teenage witch-in-training since Sabrina. What more could you ask for?

Here are some things that I REALLY loved and/or found interesting about The Furthest Station: