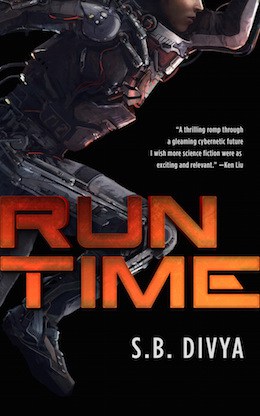 Note: I received an ARC (Advance Reader Copy) of this book from the publisher. All opinions and thoughts expressed in this review are my own.

At first glance, S. B. Divya’s Runtime is just about a race – the Minerva Sierra Challege – set in the distant future that is open for cyborgs to participate in.

Except, it’s about way more than that.

Protagonist Marmeg Guinto isn’t like the other competitors in the Minerva Challenge. She doesn’t have a huge team or support or even decent gear. From the start of the race, she’s at a disadvantage because she simply doesn’t have access to the things that the other racers do.

Marmeg is augmented, a cyborg who works as a bouncer in order to help take care of her family. Where the other racers in the Minerva Challenge have sponsors, support teams, fresh gear, and credits upon credits, Marmeg takes to the event with only the gear she’s scrounged up from dumpsters and trash heaps, an empty bank account, and the knowledge that her best might not be enough.

On top of all of that, she’s certain to be kicked out of her house once her mother finds out that she’s left her job and cleared her accounts in order to enter a race that, by all rights, she has no chance at winning. Mind you, she’s entering this race in order to help her family, but her mother doesn’t seem to think about that at any point.

(An aside: I found myself identifying with Marmeg in many different ways and on different levels throughout the novella. The classism she faces. The interactions with her mother and her brothers. I liked her character for reasons aside from the places where I see myself in her, but I enjoy characters even more when I can make those sorts of connections.)

Okay so I’m absolutely capable of talking on end about how much I adore Marmeg specifically. While that would be fun, I feel as though I should move on a head (at least a little bit).

First, I want to talk about Ardha (also known as “the one character I both want to hug and gently push over”). Ardha is kind of the closest thing to an antagonist this story has due to how zie purposefully sabotages Marmeg’s chips after she helps zir overcome an obstacle in their path. Like… zie’s kind of a jerk when you think about it actually.

Ardha is a fellow racer, a moot (a gender neutral person who uses zie/zir as pronouns), and is super cute. I mean Marmeg notices zir cuteness from the start and if you’ve read basically anything I’ve ever written, you know that I am 100% that sort of content (and also have already decided that they’re my ship for this universe the way I did with Lena and Ritter from Matt Wallace’s Sin du Jour series).

While I hate that zie absolutely messes things up for Marmeg, there’s a scene where I had to sit back and think to myself that if zie hadn’t done what zie had, Marmeg would’ve flown through the race and missed coming across Ardha at a really significant part of the book. Marmeg’s sort of rescue also sets things into play for a really wonderful moment at the end of the book where legit, despite everything she’s gone through during the course of the book, she has something amazing to look forward to in her life because she did the right thing.

I think that was my favorite thing about this book, that the end of the race and the audience’s reaction to Marmeg aren’t at all what you’d expect and you still come out of the book feeling hope for her and the future of her world.

My only problem while reading Runtime (and it is largely a “sudden lack of reading comprehension” problem and not a “this impacts my enjoyment of the book” problem) is that some of the social and political stuff was a bit difficult for me to understand.

One thing in particular centered on politics. Now the politics of Divya’s world (what we see in this fantastic novella) are familiar, but I had trouble grasping things like the Postnatal License Act for much of the book. I understand that the licensing is related to family planning and that unlicensed people don’t have opportunities because well… they’re not seen as people until they pay a fee and that keeps them from entering certain schools and from having access to college and stuff. I worry though that I’m only understanding part of what was conveyed in the book which you know… kind of sucks.

What I do get and found interesting was the way that a bunch of nats (unaugmented people) live in the mountains where the race takes place and they’re basically survivalists preparing for some kind of apocalypse that’ll fry everyone who has a chip or augmented exoskeleton. I want to see more of them and whether or not they’re paranoid or it they know something that will come to change the world that Marmeg lives in.

And okay even with my fuzzy confusion on that those parts, I’m like “well… this is interesting and I wish it could be fleshed out more because this is some fascinating political stuff with upsetting in-universe implications”.

Runtime is a novella though and there’s only so much a writer, even one as clearly skilled as S. B. Divya is, can stuff into a novella without it feeling a bit dense. My fingers are crossed that when we get another novella in this series (because optimism is awesome), we’ll get to see some more of the world and the effort that Divya put into writing Marmeg’s reality.

My weird issues with reading comprehension aside, I am in fact so happy that I got the chance to read this novella. The characters clicked and I really want to see more of them like Ardha and Marmeg’s brothers. I want to see what happens next for Marmeg and I mean, I’ve only just finished reading the book. That’s sure sign that S. B. Divya did something amazing with her work and worldbuilding because I’m already hoping for more of the universe. Runtime left me with a lot of thoughts and a lot of questions, but by far, I think I’m most pleased with the fact that it left me with hope for Marmeg. That’s amazing.

Runtime is a great, quick read and if you’re a fan of cyborg-centered science fiction that has several different kinds of diversity, a futuristic world that makes you think, and a rather relatable protagonist, you need to check it out!

Zina writes about comics, nerd history, and ridiculous romance novels when not working frantically on her first collection of short stories and complaining about stuff. One day, she'll settle down and write that novel.
View all posts by Zeenah →
This entry was posted in Book Reviews and tagged book review, Cyborgs, Highly Recommended Rating, Runtime, S. B. Divya, science fiction, Tor.Com Publishing. Bookmark the permalink.