Originally posted back in 2012 on my now-defunct MissSynph tumblr blog. I’m reposting this (with a few updates) since it is Robin’s anniversary year. We’ve got so much to look forward to with Robin as a legacy character this year and I think there’s no better time for a repost about why I can’t actually pick my favorite Robin out of the ones we’ve been given.

I want to give all of the Robins some love today since I brought home my first Robin figure so I’ll do it in canon chronological order from Dick to Damian (since I don’t feel that I can do Carrie Kelly justice yet since I can’t focus on The Dark Knight Returns for very long). 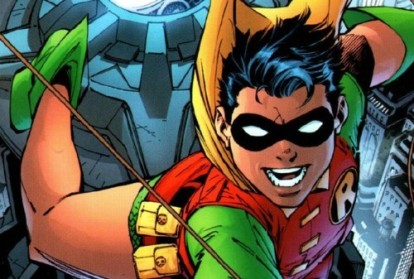 Before I knew that there were a crap ton of other Robins after him, Dick was it for me. He represented all of the bright and happy things in the world and I just loved watching him work. I didn’t grow up with the comics though so my first experience with Dick Grayson was with the old 60s Batman show with Adam West and Burt Ward.

I loved it. And even as a kid, I adored Dick Grayson who was always so earnest and eager to kick butt at Bruce’s side. He’s like sunshine and I think he’ll always be the Robin I turn to when I’m feeling down because it’s really hard to stay sad when Dick is on the page. Even at the end of the post-Reboot books where Dick is Batman and is becoming weary of the role that keeps him from doing flips and shit and just, having fun, he still tried to be funny and badass.

Dick Grayson is my favorite Robin because he always tries to have fun.

So first of all, post-Crisis Jason is the Robin I identify with the most. I love his anger and his spunk and the way that one of the very first things that he said to Bruce was to call him a boob. Come on, that scene up there is where he stole my heart. You know… And Bruce’s tire.

What I really like about Jason is that he doesn’t take shit from anyone, not even Bruce. The thing that makes me really like Jason is that while he is Bruce’s son and he’s a good Robin, he’s also a really good foil to Bruce. He’s fun to read and fun to be with (I assume) and reading anything with him in it before his death is amazing even when Starlin comes in a screws stuff up.

He’s funny. He’s got a really good sense of issues and the way the affect people. I think he’s a lot less blind about certain things than Bruce is sometimes. He was Dick’s little brother before anyone else and he rocked the scaly green panties almost better than Dick did.

Jason Todd is my favorite Robin because he was a fighter until the very end and then some. 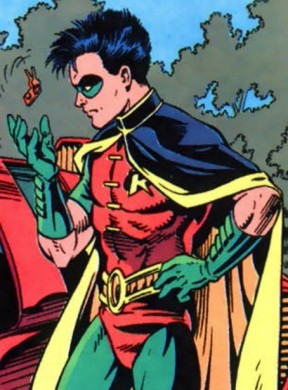 At first, I didn’t like the comic version of Tim Drake. I wasn’t introduced to the Robins in order so I kinda got Damian before Tim. It took me a while, but I realized that Tim is a pretty cool cat.

He’s so nerdy and I loved seeing a main character be a nerd and be okay with liking typically uncool things. I have the first like seven issues of his book and I just freaking LOVE the great/awful nerd references to what the writers of his books thought were important elements to nerd culture in the nineties.

One of the main reasons why I love Tim is because of his perseverance against the odds. Where most characters in the DCU have lost a loved one, a single one or in some cases both parents. Tim lost pretty much everyone. Close to every single person that he cared about died in what I think was the space of two years. He lost his mother, his father, his two best friends, his girlfriend, his stepmother, and then at last, he lost Batman.

And throughout all of that, he never stopped fighting, never stopped being the best he can be. Tim has so many issues and is one hell of a problematic character, but he is also inspiring to me because he soldiers on through it all. Even when he should be broken, he wills himself not to fall apart to pieces. 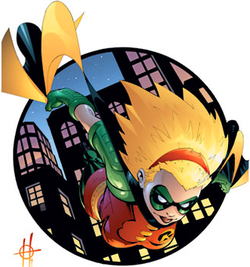 Stephanie Brown was the lone girl in a room full of gorgeous mini-Bruce clones. Her existence is important because while Carrie Kelly was the first female Robin to rock the Red and Green in our timeline, in the comic canon, the role went to her. Where young children couldn’t read the Dark Knight Returns because of its content, Steph became Robin in a run that was mostly okay for tweens.

From the start, Stephanie Brown is a force to be reckoned with. While many characters in comics either hide away from their supervillain parents or join the family business, Steph decided to take matters into her own hands to stop her father (The Cluemaster) from wreaking havok in Gotham City. She made her own first costume and was kick ass before she got Batman’s seal of approval. But then she got it and Batman sanctioned badassery holds a lot more weight than rogue vigilante-ing.

One of the things that I love about Steph is that she’s a real character. She isn’t a stereotype of what a girl should or shouldn’t be like and she holds her own against Bruce’s scowly nature. She goes through amazingly intense things such as her pregnancy in Tim’s Robin run and trains with then Batgirl Cassandra Cain (which would have to be pretty intense). Before her (later retconned) death, Steph was bright enough to rival Dick and snarky enough to make Jason proud. And she even got to be Batgirl which is totally cool.

Stephanie Brown is my favorite Robin because she showed that girls could kick ass even better than some boys and she never backed down from a fight. 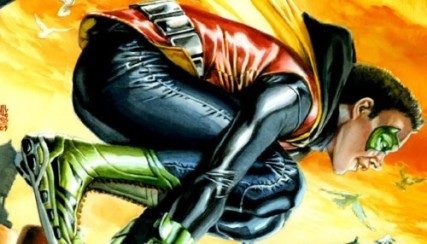 I love this little guy. He’s snarky, sarcastic, and a little shit at times, but he’s such a good kid inside that even when he has moments where I want to sit on him, I also want to cuddle him because this is a kid that has gone through so much and he’s only ten years old.

He’s been raised by Talia al Ghul to be the successor to Bruce whether or not Bruce wanted him to be his heir. He was killing animals before most of us were potty trained. He’s a badass, but he was never really a little kid. I just feel so sad for him sometimes (and that’s part of the reason why I love him) because he had all of these plans to be Batman, but then he meets the man and it’s just like “Pfft, you’re not ready”.

Damian is a child even though he didn’t get to be one really before entering canon, and in a way, he’s been super sheltered and I adore the way he’s sort of learning to deal with other people. And little shit he may be, but he’s learning. More importantly than that, he wants to learn to become someone that his father will be proud of even if his mother is disappointed in him.

Damian Wayne is my favorite Robin because he will never let anything get in his way and he knows that he still has a lot to learn even if he doesn’t have the patience for it.

I love the Robins. All of them. I love reading about them and talking about them and thinking about them because they’re all such different characters and they all bring different things to the table. With the upcoming book focusing on a wide group of Robins (including newcomer to the title and all around awesome dude Duke Thomas) and Damian Wayne dealing with new powers and growing up, there’s so much more potential pouring in to the title and the characters that were once Robin are all still so cool. They’re also still used in comics.

Come on, we’ve got Dick Grayson in the super spy comic Grayson. Jason Todd in the upcoming Red Hood & Arsenal. Stephanie Brown making her first DCnU appearances within the past year and Damian Wayne, baby Robin of my heart, coming back to life within the past year and showing up in his own title as well as upcoming issues of Gotham Academy. Like being Robin never looked so good because most of the Robins that existed in canon? Well they’re doing freaking fantastic and I still can’t figure out how I’d order them from my most to least favorite. That’s how fabulous these characters are!

I can’t wait to see what the future brings us in terms of Robins and I wonder if when I’m getting on in years and DC is still churning out Batman books, if I’ll look at their books, at their new Robins swinging (or flying) alongside Batman and tell myself that I’ve got another favorite Robin.

God I hope so.

One thought on “My Favorite Robins”