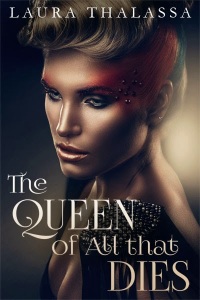 I’m not sure how I stumbled across this book. One minute I was looking for comic book history books on my kindle and the next thing I know I was neck deep in this gritty-as-hell post-apocalyptic universe and I couldn’t get enough of it.

Normally I don’t read dystopian stories. I’m a “Happily Ever After” kind of person and if that’s not guaranteed by the author or if I can’t figure out the ending within a few chapters of the book, I get bummed out. I can assure you that there was none of that dark dank depressed feeling associated with this book.

From the start I liked Serenity Freeman, our main character and the person whose POV makes up the majority of the book. She’s a fighter from the start, adapting to the world around her and becoming someone that could very feasibly be a contender for serious power on her own. Even before the significant plot twist that puts her up as a person that could run the world, she’s intense.

Serenity is nineteen. She’s five years younger than I am but the character is miles more mature than I probably will ever be. She’s been put in a position where she absolutely has to kill or be killed for the sake of her country and her people and the strain that puts on her is backbreaking. I love that she’s this strong character who’s willing to shoot someone in the face in one moment but when her world is literally torn away from her, she does break and she does give into the urge to cry.

Now as much as I like Serenity, I have such a hate-on for the king. I knew I wasn’t likely to like him. Even with the dramatic backstory reveal we get near the last quarter of the book, King Montes Lazuli is a piece of work. It’s so hard to care for him because well… he’s an egotistical dictator that sees nothing wrong with ordering genocide. Sure, we get to see that he has his soft spots underneath all of that distancing armor and terrible choices but personally that makes no difference to me.

He’s still a man responsible for a nuclear bomb spree across the world and who only shows remorse near the end parts of the book where it becomes evident that Serenity’s presence is changing him. It’s a little hard to come to terms with. The character makes me uncomfortable – he’s menacing, makes threats towards Serenity that skeeves me out, and acts as if he can do no wrong. I could see why Serenity fell for him. He was charming and Laura Thalassa’s descriptive prose was such that I could easily picture his handsome face, but wow I really couldn’t get over how awful he was.

I’m going to be honest; I could take or leave King Lazuli. If you’ve read one powerful fictional dictator with a heart of gold, then you’ve kind of read them all. I’m not here for him. He’s a compelling character and I could go into detail talking about narrative choices, character evolution, and the like, but I didn’t root for him the way I’m rooting for

So why am I recommending this book if I can’t stand the love interest?

Because of Serenity and the universe’s world-building.

The world building in The Queen of All that Dies is tight. It’s easy to follow along with and you have present-day exploration of the world alongside brief flashbacks that don’t knock you out of the mood. In many series with a dystopian bent, you find out the cause of the world-breaking/ending cataclysm later on in the series.

But not here. Not in this book.

I’m the kind of person that wants to know what the monster looks like very early on in the film and the same feelings carry over here. Learning about how bad the world needs healing and how terrible living conditions are across the world after this war in the first freaking book makes all of the difference. Because now I’m invested in the world. I want to see how the events in the book will change the geopolitical landscape and how everyone will cope with changes in future books.

Now Serenity is an amazing character, full stop. I want to see how she grows and changes. She is metaphorically baptized by blood through the course of the book and every single person that she loves in the world is gone. She should be out of her gourd with worry and panic and of course there is a fair bit of acknowledgement that Serenity is suffering from mental and physical health issues as a result of this world’s chaos.

Aside from my issues with our love interest/dictator king, one issue that I did have and that I hope gets fixed in later books is that I’m not feeling as if there’s a lot of diversity in the cast. It doesn’t lessen my enjoyment of the book at all but it does change the way I read into the book.

One massive problem I have in reading genre fiction that isn’t stamped with a (metaphorical) Diversity stamp is that people of color don’t really exist. Sometimes it’s a quirk of the author’s style and other times it’s a purposeful form of erasure. Hopefully in this case it’s the former as it’s the easiest thing to fix (just put more vivid and explicit descriptions!).

The next book in the Fallen World series doesn’t come out until January 2016, but in the meantime, you can check out some of Laura Thalassa’s other works on Amazon!