Note: This review was originally written for a graduate level course I took last semester where we had to write a review for a scholarly book that was related to our thesis. As this book actually inspired my current thesis project (about queer readings of a queer-coded Joker and the role that homophobia plays in these readings), I couldn’t pass up on the chance to review this book.

A regular panelist on NPR’s Pop Culture Happy Hour podcast, Glen Weldon is probably the best author that could have ever been drafted to write a book about how Batman’s creation shaped the development of nerd culture and fandom as it exists right now.

His book The Caped Crusade: Batman and the Rise of Nerd Culture seeks to put Batman into a certain cultural context, looking at the way that the character’s history has shaped generations of fans, comic and film creators, and the fans that would grow up to become these creators. Weldon looks at how, over the course of the past seventy-seven years, Batman and nerd culture have participated in certain cycles that alternated between “camp and cheery” and “grim-dark and gritty”.

In The Caped Crusade, Weldon approaches the heterocentric canon of Batman’s various texts through a perspective that only a gay man can bring to the table. In his close queer reading of Batman’s history, canon text throughout the decades, and the fan community (or fandom) that sprawled up around him, Weldon looks at how queerphobia shaped Batman’s trajectory and inspired hundreds of thousands of fans to eschew the very idea of a queer Batman while queer fans clung to the potential opened up for them by the subtext embedded within the character. END_OF_DOCUMENT_TOKEN_TO_BE_REPLACED

It’s been two months and I still get the best reactions to my post “Dear Comic Fans: We Get it. You’re racist and racebending scares you.” And by best, I mean that I get some of the most condescending and willfully ignorant responses out there.

Way to prove my point, fellow comic fans. How weird is it that the majority of the people that have sent me nasty tweets or left rude comments on my blog (the majority of which have probably been eaten by my spam filter because it’s super strict) are people who have gotten so angry about racebending and my calling out racism, that they need to react angrily to them?

It’s like they read my post, didn’t register anything, and decided to behave in such a way that validated my comments on fandom’s racist reactions to people wanting or working on more diversity in comic canon or superhero media. 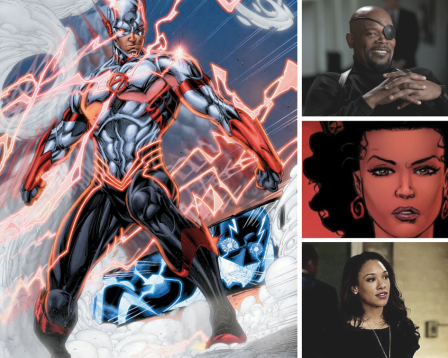 Why are comic book fans so darn mad when a comic book character gets the racebending treatment?

For the most part, comic book fans are so very predictable when it comes to race.

This week’s post is pretty heavy on the social justice even though it’s also about comic books and video games. A lot happened in comics and in social justice and I started paying attention to more of the things being passed around my dash. Especially pieces on harassment and accessibility in comic book culture.

So here’s what’s stuck in my thoughts this week.

Trigger Warning for: abuse, online harassment, references to The Killing Joke under the cut

I’m not much of a gamer.

In fact, I’m terrible at video games and boardgames and roleplaying games. If it’s got the word “game” in it, I’ll gladly admit that I’m probably terrible at it. But despite that, the one series I love and buy all the time without a care for how long it’ll take me is the Batman game series put out by Rocksteady Studios.

When I say I love this game I mean… I really love this game. The only entry in the series I don’t have so far (aside from AK since it’s not out yet) is Arkham Asylym and that’s only because my college roommate’s boyfriend had it when it came out so I did my thing and struggled through the game as best as I could.

Hell, I still haven’t finished playing my copy of Arkham City (that my best friend got me in 2012!!) but I bought Arkham Origins last year and I’m probably going to buy Arkham Knight when it comes out in June.

Because I’ve just seen the utterly gorgeous cinematic trailer for the game. Everything about it looks perfect and super realistic. Bruce’s face — geez, Bruce’s face — The footage in the trailer actually looks like an actor instead of 3D modeling/rendering from the game. And Harvey Dent, my second favorite villain in the DCU, was there shooting up the joint and I loved it.

In all seriousness: this trailer got me even more excited for a game that I was already excited to buy and I think that everyone should at least watch the trailer once (because it’s good).

END_OF_DOCUMENT_TOKEN_TO_BE_REPLACED

As a long-time comics fan and someone with a very extensive comic book collection (in print and in digital form), one of my least favorite experiences is having to deal with gatekeepers in comic book culture — creators, fellow fans, and comic store staff — that think that comics belong to boys and quizzing fans on their knowledge is a valid way to “save” the industry.

From July through December of 2014, I was out of the country. I was 1100 miles away from everything that was familiar to me and a good thirty-minute flight away from the nearest comic book store (in Puerto Rico of all places!).

I was on an island with no bookstore, one movie theater, and RadioShacks that didn’t even sell video games. You’d think that I’d be able to get away from the unpaid and unasked for gatekeepers of comic book culture on an island like that right?

Even on that island, I had to deal with unwanted comic book gatekeepers testing me to make sure that I belonged (and hoping that I didn’t) and it sucked. END_OF_DOCUMENT_TOKEN_TO_BE_REPLACED