Note: You may disagree with this reading. You may think that’s not a valid reading. That’s fine, but as experiencing misogynoir in a comic that I adore and having clear proof that women of color (especially Black women) will always wind up “losing” to whiteness/white women is hurtful to me, I absolutely do not want to hear about it. 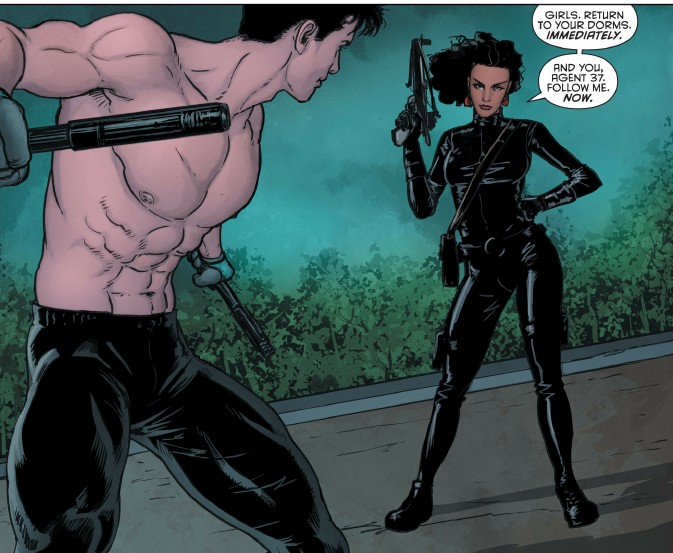 I knew Helena Bertinelli and Dick Grayson wouldn’t end up together at the end of Grayson #20.Despite my shipping goggles snapped tightly to my head (and you know… the actual content in the book), I knew that they wouldn’t be riding off into the sunset together especially as both characters are going to be in their own books come Rebirth.

But I knew that Dick and Helena were attracted to each other because there are several separate moments in the comic series that shows that their attraction is mutual.

More than that, the comic showed that on some level, they cared about each other as more than friends and it was in a way that could be construed as romantic. A way that could have been fleshed out in the upcoming Rebirth reboot or that would have gotten more focus in the comics had Grayson continued past issue #20 with the original creative team (Tim Seeley and Tom King on writing with Mikel Janin on art).

How do I know this? Well, in Future’s End: Grayson, five years into the future of the DC Universe (pre Rebirth and all of the retcons that’s going to be responsible for), Helena and Dick are together romantically.

So to go through Grayson #20 and basically see the new creative team kind of crap all over that is incredibly hurtful. END_OF_DOCUMENT_TOKEN_TO_BE_REPLACED