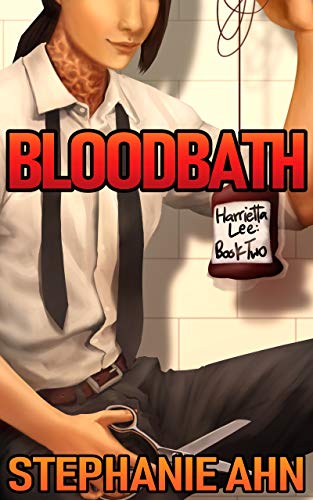 I spent a lot of time reading Bloodbath (Harrietta Lee #2) and wondering how on earth Harry manages to make it from one day to the next. To be fair, I’m pretty sure that she has no idea how she’s managed to survive as long as she has either.

In case y’all somehow missed me talking her up, Stephanie Ahn is currently my favorite urban fantasy writer in the game.

Her first book, Deadline, left me stunned by how amazing it was. My introduction to Harry, a dashing and disgraced witch booted from her community after making a bad call and dabbling in some demonic magic that led to the death of her mentor, really changed the way that I flat out looked at the urban fantasy genre.

Deadline was so good that I put it on my “Best Urban Fantasy of 2018” list the moment I’d read it. I recommended it to everyone I knew. I still do. Deadline is honestly everything I feel everyone should want to read in the urban fantasy genre and it’s lowkey one of my goals to get all of my UF-minded friends and followers to give it a try.

And Bloodbath keeps up that same energy.

In Bloodbath, Harry’s friend Joy is one in a worryingly long list of people with magical ability that have gone missing. After Harry gets on the case and sets out to find out what’s happening, she finds a connection between the missing people and the magical council in New York. She has to reach out to the Man and well… In case you were wondering, magical cops (and their bosses) are just as shitty as non-magical ones.

I don’t want to spoil Bloodbath, so I’m not going to. This isn’t going to be that kind of review because that’s not actually important when y’all can just experience this brilliant, bitey book for yourselves.

What’s important to me is letting y’all know that once again, Stephanie has blown my expectations out of the water.  I fell in love with Harrietta Lee from the first freaking page of Deadline. I am predisposed to love hot lesbian messes in every single context and Harrietta makes me so happy that I literally can’t even.

I love reading about Harry fumbling and fucking (up) her way through life. I love that she gets to be a mess and make mistakes and that the world isn’t punishing her for anything except her absolutely terrible decision making. I love that she is wrestling with her past. I love that her relationship with the demon Lilith is messy and stressful and really hard to parse. I love that Harry literally always refuses to stay down and that she’s got a huge heart of gold that never stops working.

I love that Harry feels things so much –

And that ending… Oh. I’m so ready to see what happens to Harry next.

Bloodbath is an example of really fun, but dark and truly fascinating urban fantasy. I’m friends with Stephanie, so I’m a bit biased, but I’m so serious when I say that her work is a must-read for folks interested in this genre. I mean, she’s amazing. She’s literally someone that the folks with their fingers on the pulse of urban fantasy need to freaking be following because she’s aware of the tropes, she’s big on subversion, and she’s providing that sweet sweet disaster gay content.

Harry is a hot ass mess who deserves the world and you deserve to have Bloodbath in your life right now.

Content Warnings/Notes: graphic violence and its aftermath, sex (chapters 2 and 16), discussion of abuse (chapters 5 and 10), death of young children (chapter 14), vomiting (chapters 11 and 17), and sex involving (and taking place in a bathtub filled with) someone else’s blood (chapter 16)
Are There Sex Scenes/Sexual Content?:  Yes, yes there are.
What I Liked Most About It:  Harry is a hot fucking mess and I don’t know if I want to be her friend or date her and be her friend, Lilith is an unexpected darling, Luce is such a good sister, I felt emotionally invested the entire time and I cried like twice, the ending just about broke me, Stephanie is a boss @ worldbuilding development
What I Could’ve Done Without: I don’t know if it’s because it’s been a while since I’ve reread Deadline, but I definitely felt like I was missing some things in terms of worldbuilding and flashbacks
Where Y’all Can Buy It:  AMAZON
Author’s Website/Social Media: Stephanie Ahn @ Twitter | Website
Rating: Highly Recommended