What Fandom Racism Looks Like – Misogynoir: Black Fans on the Defensive 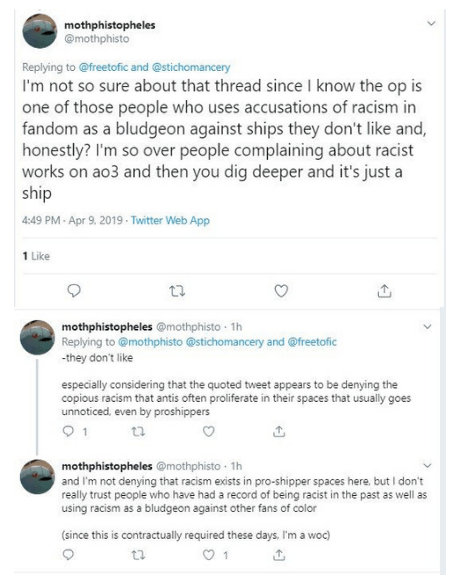 I’m not so sure about that thread since I know the op is one of those people who uses accusations of racism in fandom as a bludgeon against ships they don’t like and, honestly? I’m so over people complaining about racist works on ao3 and then you dig deeper and it’s just a ship

Especially considering that the quoted tweet appears to be denying the copious amounts of racism that antis often proliferate in their spaces that usually goes unnoticed, even by proshippers

And I’m not denying that racism exists in pro-shipper spaces here, but I don’t really trust people who have had a record of being racist in the past as well as using racism as a bludgeon against other fans of color

(since this is contractually required these days, I’m a woc)

Right around the time I was getting ready to end my time in grad school back in April 2018, I started getting really sharp anon messages and newly created tumblr blogs reblogging my posts on fandom racism specifically to harass and mock me.

These posts and anon messages also claimed that I was trying to police women/queer people (because I was jealous of their ships’ popularity) and accused me of being racist against Rose Tico – over a post I’d posted on Patreon critical of how she was handled and claims that I was supporting a supposedly anti-Rose “Finn Appreciation Week” blog that I’d only reblogged one thing about.

It didn’t matter what I posted about.

It didn’t matter if I blocked them.

All purposefully misrepresenting years of my growth and my work talking about race and racism in media and fandom spaces.

I never knew when I’d check my mentions to see their nasty comments.

I was being called a bully and a racist by people who were harassing me and were undoubtedly doing it because I was a Black person critical of the fandom things they loved.

I left tumblr for good – more or less – shortly afterwards because I was actively being lied on, digitally stalked, monitored, and harassed by people who were claiming that I was the ultimate bully for committing the deadly sin of… talking critical about race and racism in media and fandom spaces.

That was a year ago.

To see the person whose tweets I quoted up there parrot the same untruths a year later… Well, It hurts. I’m not going to lie. It hurt, but it also pissed me off to the point where I pretty much got sick to my stomach.

But it’s not anything new.

I have never received a purely positive reaction to talking about racism in fandom or in media. Not from fandom spaces or fellow fans.

I’ve had folks reblog my text posts with racial slurs and accuse me of hating white people.

I’ve been called a twat.

I get my sexuality (and occasionally my gender identity) erased (so I’m “just” a bitter straight woman out to police fandom into shipping my interracial M/F ships apparently).

I’ve been called racist and toxic for talking about racism in fandom.

I constantly have people warn folks off of sharing my work/tweets because I’m problematic.

I had folks mock me/my posts amd dunk on my appearance and intelligence across anonymous meme posts on Fail Fandom Anon and other folks’ dreamwidth accounts.

Part of why I no longer put pictures of the niecelings up is because I was getting so many people attacking me for my critical thoughts on fandom that I didn’t know what I’d do if I saw someone going after one of my girls. I was afraid of that happening from transformative fandom more than the dudebros that supposedly make fandom look bad over in curatorial fandom.

And let’s be very real here, the reason I’ve experienced all of this is because they don’t like that I’m a (queer and Black) person writing about race and racism in fandom in ways that they don’t like.

It’s not that I’m particularly mean – I’ve in fact tried to move away from that for the most part, even when attacked and lied on – but that my talking about how fandom is Not Great for Black people in any way, I challenge what folks want from fandom.

I make it hard for them to settle in the squee.

But why is it that only some people in fandom get to squee?

I’ve been asking this question in fandom/of fandom for ages. Honestly.

This final installment in my What Fandom Racism Looks Like: Misogynoir mini-series is supposed to be about Black fans on the defensive, but… here’s the thing about that: Black women (and lady aligned folks) in fandom aren’t actually allowed to defend themselves.

When I saw the screencapped thread and a few others that painted a portrait of me as a jealous, racist shipper that only talks about racism in fandom to try and force folks to somehow do what I want (whatever that is), all I could do was block them. I couldn’t @ them (despite the fact that I’m tagged in and got notifications for their thread).

Because if I do it, I’m just proving them right that I’m a bully and mean and trying to hurt other POC.

I can’t let go of the fact that these people are rewriting me.

These are people who’ve never interacted with me and who don’t know me beyond my writing – so they don’t know I’m a person apparently – deciding the worst about me and spreading that to other people.

I’m being rewritten by strangers that probably can’t even tell you a solid fact about me (not how many niecelings I have, what form my religious devotion takes, what my actual problematic fave ships and fandoms are) so folks will feel comfortable and validated in their refusal to pay attention to my work on race and racism in fandom.

And again, I can’t defend myself in any meaningful way in part because I don’t even know what I’m defending myself against.

Like I want to know what my “record of being racist in the past” is because a) I’ve never hidden that I’ve always been growing as a person and b) it’s probably because I either called out a fan of color unkindly or because I don’t love Rose Tico.

(How do you, as a person of color, defend yourself against unsubstantiated accusations of racism and bullying from folks who never give specifics that you can rebuff with your own screenshots?

All I can do is keep doing what I’m doing: writing honestly and being transparent about my journey through fandom and my desire to be my own (im)perfectly problematic fave.

Part of the whole thing about Black female (and lady adjacent) fans being on the defensive is that this sort of malevolent rewriting happens to all of us at some point or another. We are constantly rewritten by racists and Pick Me POC that want validation from them.

We are always turned into “the real racists” and bullies by people who stay silent as we’re harassed from fandom spaces and bullied by folks who don’t want fandom to change in any meaningful, positive way.

As I write this, I realize that almost all of the Black women (and lady-adjacent) fans I know of from the fandom spaces I was in and who talked critically about fandom on the same level that I did…

They all have mostly tapped out of fandom because it was unhealthy and unsafe for them.

They’ve dialed back their critical engagement with media and with fandom because they were tired of being attacked, lied on, shunned, harassed, and rewritten as a fandom police officer out to control poor, innocent (WHITE) queer lady fans.

They dropped out because the same people frothing at the mouth over how fandom needs to be fun and uncritical at every step were camping out in their inboxes, smearing them across whisper campaigns, and making an effort to drive them from fandom.

For pointing out – usually within the circle of their own friend groups originally – that fandom is super racist and that Black women/female characters get a majority of the racism.

Of the Star Wars fandom post-The Force Awakens, I can only think of one or two Black women who are still active and critical of the fandom on tumblr. Maybe four at the most. Almost all of the Black women I knew in the fandom and who were critical of the way fandom treats Black characters and people were essentially run out of town.

And that fandom stills sees it as a victory because the totes authoritarian “antis” out to keep decent queer folk from having fun have left.

If the big boogeymen in your fandom spaces are Black women and femmes talking critically about how fandom treats its Black characters and fans… perhaps the problem isn’t Black fans.

Perhaps… it’s the fact that fandom is antiblack and full of fans that don’t want to unpack shit.

From as far back as 2012/2013, I’ve been accused of wielding discussions of racism as a weapon by white fans and fellow fans of color alike. Because me and other Black women and lady-adjacent fans talking about racism in a way that challenges the established desire for guilt-free squee is seen as a topmost threat to people that don’t want the utopia of their fandom challenged.

And if you’re taking our conversations as threats, you’re going to see us as wielding weapons.

I don’t actually “[use] accusations of racism in fandom as a bludgeon against ships they don’t like”, my approach to fandom and media is a bit more nuanced than that.

But even if I was? You wouldn’t have to worry about getting hit by my bludgeon if you weren’t part of the misogynoiristic problem.

The goal of rewriting Black fans critical of fandom is to drown them under the weight of misogynoir – the harassment, the shunning, the threats, and the outright unkindness – until all they can do is leave.

But let’s get one thing straight: no one is making me go anywhere before I’m good and ready.

Zina writes about comics, nerd history, and ridiculous romance novels when not working frantically on her first collection of short stories and complaining about stuff. One day, she'll settle down and write that novel.
View all posts by Zeenah →
This entry was posted in What Fandom Racism Looks Like and tagged fandom racism, misogynoir, online harassment, white feminism. Bookmark the permalink.

8 Responses to What Fandom Racism Looks Like – Misogynoir: Black Fans on the Defensive