What Fandom Racism Looks Like: Woke Points For What? 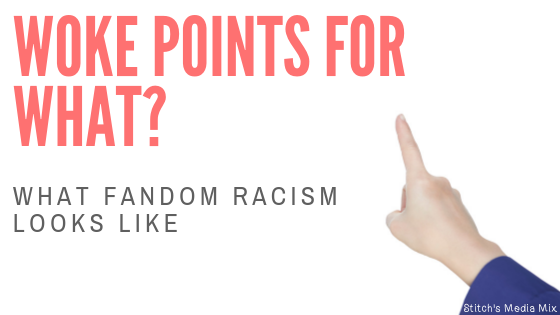 In and outside of fandom spaces, performative allyship is a thing to be wary of.

In a piece for The Wooster Voice, writer Sharah Hutson describes performative allyship as, “when folks pretend to care about a cause but magically forget to keep the fight going outside of certain spaces”.

We’re talking about people who only seem to care about the plight of the underprivileged when it looks like they can get something out of it.

You know, like folks who record themselves helping disabled people cross the street, people who post about how they helped the neighborhood homeless person get breakfast on social media, and white saviors who travel to Uganda and Haiti to “help” but are really just participating in imperialistic voluntourism that does so much more harm than anything else.

These people may mean well and they probably even see themselves as actual allies, but their allyship seems skin-deep and conditional on the attention they get or the marginalized people’s compliance and subservience. The second they’re no longer getting praise or when the person or group they’re trying to help isn’t compliant, the person in question stops being an ally.

But you know what’s not performative allyship?

A Black person in fandom talking about what they find racist in a piece of media or fandom space.

Let’s be very real here: accusing people of color of faking their supposed wokeness for some unspecified fannish social capital should not be a thing.

I’ve only ever seen folks from one fandom use the specific term “woke points” on the regular – that dubious honor is bestowed upon the Rey/Kylo portions of the Star Wars sequel trilogy fandom – but there’s plenty of unstated belief that the only reason anyone in fandom talks about race and racism is to win some kind of “Wokest Fan” award.

We saw it back in 2016 with Franzeska’s infamous fan-meta “Your Vagina is a Bigot; My Vagina is a Saint” and we’re still seeing it in how many people in the “anti-anti” community assumes that every single person with a critical thought about fandom is doing it because they want to be liked and lifted above others.

I’ve said it before and I’ll say it again:

Most of the people in fandom who position themselves as critical of fan content/creators and of media aren’t doing this criticism because they want to get or are getting anything out of it.

For the most part, even in situations where social justice appears to be weaponized or it’s used in a way that does hurt others, we’re talking about marginalized people who finally have the tools to describe the way that some of fandom’s favorite tropes and ships make them feel.

Assuming that everyone that brings up the potential harm or the problematic aspects of a ship, trope, or setting fandom likes is doing it solely to get something from fandom – rather than because they actually care about the topic –really… doesn’t make sense to me.

Especially when you think of how it’s set up with a double standard where fans of color that talk about racism in fandom/media and try campaigning for better representation from the source are treated like the front line in a battle focused on ideological warfare.

It’s not an example of ideological warfare when parts of the Sterek camp in the Teen Wolf fandom had folks out there:

But it is the second other people – especially queer people of color – talk critically and harshly about the way that the Sterek fanbase largely made the fandom a hostile place for anyone that didn’t like the ship or wished that the fandom focused more on the actual main character Scott McCall (who, again, was played by Mexican American actor Tyler Posey)… then it was a problem on their part.

Meanwhile, you can’t even talk about how Scott deserved better here in 2019 because undead Sterek fans will rush to inform you that you’re wrong and unintelligent as if Jeff Davis is lurking behind a curtain and promising to make the ship canon if they dunk on Scott/his fans.

Fandom has always been about weaponizing and politicizing fans’ identities and the identities of the characters we love.

That’s proven in every single conversation about how fandom should be respected and free from critical thought and judgement because the primary creators in this space are assumed to be queer women writing about queer characters.

(The way folks talk about the term fujoshi and the culture around BL manga in Japan in ways that almost… obscure the role straight women in Japan have in creating and consuming the work to frame it as a solely queer-positive, queer-created genre is a really frustrating but fascinating example full of complexities I’m only like 15% capable of unpacking for an audience.)

The way that fandom uses the (potential) presence of marginalized fans in somewhat problematic or notorious fanbases to shut down critical conversation is actually one of the most consistent and constant ways I’ve seen identity wielded as a weapon in fandom over my lifetime as a fan.

Think about how white women in fandom often weaponized their own womanhood – accusing other women, usually who aren’t white, of misogyny when they critique something that women in fandom like.

That’s been going on for years.

We’re literally a decade out from Racefail ’09.

Part of that whole hot mess involved multiple white women in the science fiction and fantasy community and fandom using their white womanhood as a shield pointed at Black women in the same community.

Folks using social justice language or concepts they believed in firmly to shut down critical conversations or to try to pressure others into liking or canonizing their ships didn’t come from the Voltron Legendary Defenders, Teen Wolf, or Star Wars fandom.

This phenomenon dates back ages ago to when folks first realized that they could say “hey, I’m a woman/gay man/assault survivor” and have their thoughts on fandom respected to the point of changing how people did fandom in said fandom.

And even in some of the most widespread or notorious cases, it’s not as clear-cut as you think.

For example, in the Star Wars fandom: some folks will have you believe that the only conversations about social justice and shipping stem from a desire to continue framing Finn and Rey as “the most ideologically pure” ship.

Aside from the fact that that term more accurately applies to you know… Rey/Kylo, the ship involving two white people that every moderately successful media outlet has written about as if it’s going to “save” the Star Wars franchise…

They’re not saying anything about the endless anti-Black and anti-Latino racism that fans of Rey and Kylo have directed towards Finn and Poe – the most visible characters of color in the franchise.

They’re not talking about the way that a bunch of their own fans used social justice language to argue that Kylo Ren is marginalized for some reason or other –because he must be mentally ill, queer-coded, representation for mentally ill folks and trans folks and survivors of abuse, or technically “not white” – and that he can’t be criticized because of it.

“Ideological purity” is a phrase that essentially revolves around scolding marginalized people for not reaching across the aisle to coddle people that’d be happy if Thanos’ snap wiped them out entirely.

It exists to shame marginalized people for not listening to folks whose political ideologies include… wanting them dead or kicked out of the country for being anything other than an abled straight white folks.

It shouldn’t be a phrase you use in fandom and for talking about ships.

If you want to talk about how folks need to be careful about how they discourse in fandom, you can do it without wholesale borrowing the language used by bigots to make marginalized people seem small-minded for not holding hands with their would be oppressors.

Is every single discussion of social justice in fandom on the up and up?

Is the way a lot of us try to talk about critical issues in fandom a bit… bitey?

Can performative allyship be a problem in fandom?

But here’s the thing: people have always preferred to believe that any conversation about social justice in fandom or about media that is in some way critical of a thing fans like exists because of a person arguing in bad faith.

If our arguments are done in bad faith – because we’re just jealous of a ship, because we’re babies who won’t just scroll past the fifty-eleventh surprise slavefic story or sexy sexual assault story, because we don’t have the talent to create our own content, because we’re actually secret conservatives trying to infect the masses- then folks don’t have to listen to them…

And it’s always framed as if it’s done in bad faith.

While there are probably (definitely) allies faking some level of their interest in social justice rhetoric though, chances are that they’re not, you know… the marginalized people talking about their experiences as marginalized people in fandom spaces.

It’s a problem that’s been in fandom from 2009 and earlier – check out this fandom racism bingo card from 2009 – where fans of color are never assumed to be arguing in good faith.

It’s a problem that fans of color who dare to talk about the racism we witness and experience in fandom spaces are consistently portrayed as outsiders who only talk about what’s bothering them because they want something for doing so.

I’ve been accused of writing about media and fandom criticism for “woke points” before and at the end of the day, I’ve only got one question to ask in response:

Where can I turn them in?

You know, since I’ve apparently been racking them up for that reason all this time…

Zina writes about comics, nerd history, and ridiculous romance novels when not working frantically on her first collection of short stories and complaining about stuff. One day, she'll settle down and write that novel.
View all posts by Zeenah →
This entry was posted in What Fandom Racism Looks Like and tagged allyship, racism in fandom, Star Wars, Teen Wolf. Bookmark the permalink.

3 Responses to What Fandom Racism Looks Like: Woke Points For What?