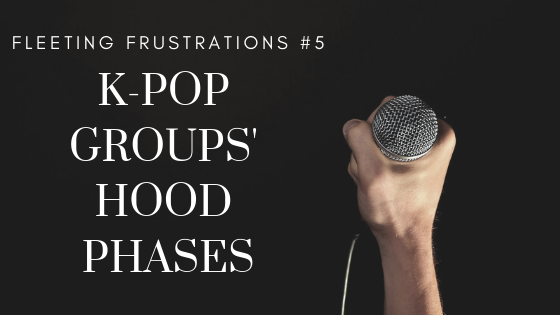 I’m gonna be honest here: If the first thing I’d seen from BTS had been their super cringey, wannabe hood phase back when they’d first debuted, I probably wouldn’t be able to give a shit about the group now.

To this day, I still can’t make it through the group’s videos for their early singles “No More Dream” “We Are Bulletproof Pt. 2” and “N.O” without cracking up until I start wheezing.

And that’s before we get into group leader RM’s cringe-worthy and super appropriative hairstyles during the early days (like his pseudo-fro in the first two videos or the 3B/4A curls and dreads he appeared to be rocking pre-debut thanks to what I’m told was a perm). (Here’s a timeline of some of RM’s hair hits misfires EXCLUDING the curls – which are apparently the first image at this link.)

BTS hit the ground running as a faux-hood group. Their whole thing was like… setting them up as this socially conscious street gang. Everything about their look in 2013 was this manufactured look that showed what K-pop stylists and folks in the industry viewed as a path to proper hip hop.

Their look, their style, and their sound was pretty much what happens when you take an approach to hip-hop that sees Blackness and Black people as commodities to be transplanted onto and consumed by non-Black people.

It was a whole ass mess that somehow did nothing to stop the group from rapidly gaining popularity first in South Korea and then worldwide.

Here’s the thing though:

BTS isn’t the only Korean music group to have a horrendous hood phase in their beginning.

Theirs is one of the most embarrassing to me personally, but they’re not the first and they definitely won’t be the last.

Groups like Big Bang, NCT 127, Monsta X, GOT7, and EXO have all had hood phases with at least one of their comebacks partially or entirely concerned with hood or “street” sound and visuals.

(Some of the girl groups probably have too, though I can’t think of any off the top of my head.)

The groups that have adopted a hood aesthetic at some point or another tend to do it from head to toe. From hair (the aforementioned almost afro to single braids and shitty dreads) to a sort of hood aesthetic that can often be boiled down to baggy pants, over-sized jerseys, and gold jewelry everywhere.

It’s an approximation of what these groups and their stylists think Black people dress like, and it’s supposed to look cool. 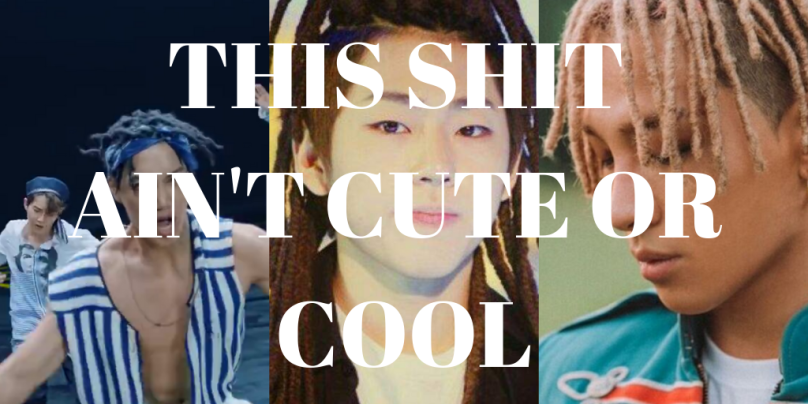 Non-Black entertainers around the world adopt Blackness in order to seem edgy and cool as they break away from society’s strict rules. See the Japanese hip-hop scene that got us Diggy Mo and m-flo and all of the 90s Pop Princesses (and Miley Cyrus) that adopted a hood phase to keep from being pigeonholed as good girls in US media.

Around the world, non-Black folks who adopt Blackness get a veneer of coolness and validity added to their humanity that actual Black people aren’t allowed to have.

I could get all academic on y’all and talk about the rush of non-Black artists to capitalize on hip-hop and Blackness while not liking or knowing anything concrete about Black people or Blackness in their country – or any country, at that –

Let’s put a pin in that.

At the end of the day, I really like K-pop. Again, it’s not really hard to like a genre that was literally manufactured to be likable.

At the same time, however, I’m a Black person from the US who’s been listening to hip-hop and rap for most of my life.

The culture I’m seeing these groups put on and then take off once they’ve got it made… belongs to my people. I know that culture is something that should be able to be shared with everyone, but it’s hard to feel like that when we’re talking about the way that Blackness and Black people are turned into commodities and disrespected.

So many groups in the industry want to look, sound, and act Black, but –

Do they even actually like Black people as people? (As opposed to liking and viewing us as convenient cultural touchstones they can then tap and gain even more prestige and attention before they inevitably “mature” out of overt hip-hop imagery/Blackness and class it up?)

The fact that I can’t straight up be like “yes, probably” with any serious level of confidence about half the groups I like… sucks.

Hood phases for non-Black performers who’ve never even lived in the hood or probably ever interacted with Black people in any significant way are uncomfortable to witness as a Black person.

(But, let’s be real here, it’s also weird to see a performance of Blackness or hood phases from non-Black folks who probably had Black friends growing up like Pink, Awkwafina, and Jessi.)

In general, I’m used to Blackness being seen as a cool and fun style to adopt by people who aren’t always clear about how they feel about Black people. I am. I’m in fandom after all. The K-pop industry and its fandom aren’t doing anything different. Not really.

But it still stings a bit to constantly see K-pop groups essentially get rewarded for performing Blackness in a way that’s palatable to pretty much everyone in a way that actual Black people –even the performers many of these groups openly admit to adoring – will never ever get access to.

I’m not going to stop listening to or liking K-pop, but I’ll keep bopping along to k-pop songs like Jay-Z in the most useful gif ever: