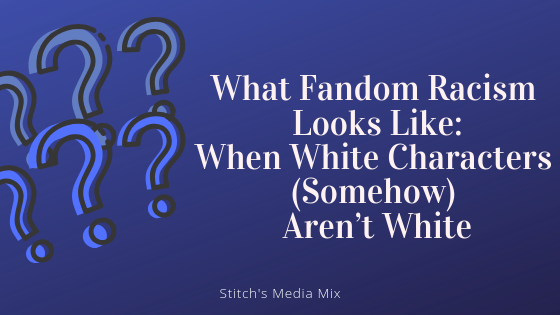 Let’s keep this short and salty: did y’all know that there are people – thankfully a minority in their respective fandoms – that will claim a white male character or actor isn’t white for some reason or another.

Well, if you didn’t know before reading that sentence, I’m willing to be that you’ve figured out what you’re gonna learn today in this installment of “What Fandom Racism Looks Like”.

One of the weirdest things I’ve ever come across in all of my years of fandom is this relatively recent thing where fans of a white male character – usually one half of a powerhouse ship involving two white characters – somehow get it into their heads that said white male character isn’t actually white after all.

This freaky phenomena is made worse by how it tends to happen in fandoms for western media where characters of color are already underappreciated and often don’t have tons of fanworks created about them. This tiny trend often culminates in fanworks – fiction or headcanons – or discourse where the white male character is removed from his whiteness and set up as unprivileged and therefore in some way removed from critique.

I’m here to assure you that being a person of color – real or fictional – doesn’t save anyone from criticism.

Over the years, I’ve seen a few people actually assume that the reason they were being dragged for their comments about one person of color or another in Western media fandom spaces were because people of color somehow couldn’t be criticized.

In this caption, @NoShit_1 accuses me of refusing to let Scott/Tyler Posey (From Teen Wolf) be criticized. Considering that so much of the criticism looked like wanting Scott killed off, making fun of his jawline, or making fun of Tyler Posey after his mom died (including wishing that he’d killed himself like he said he wanted to)…  I guess I am.

No, the reason that their (super biased) criticism was being met by fans of color and white people sick of the crap pushing back against it must have been because… people of color are too sensitive and so we must be trying to protect our special snowflake characters/people of color from being criticism.

If that sounds familiar, it’s probably because there are people who actually think that any clapbacks against criticism for Black-focused movies like Black Panther, If Beale Street Could Talk, and Spider-Man: Into the Spiderverse come because Black people can’t handle criticism rather than how a lot of that criticism those three movies got was downright gleeful in its anti-blackness and written by critics that wouldn’t know nuance or intersectionality if they got smacked in the face with a dictionary.

Your criticism isn’t getting dunked on because we’re melting snowflakes.

It’s getting dunked on because it’s bad.

It’s criticism like “Finn should’ve died on Crait to fulfill his arc”. It’s the people who choose Candice Patton – out of all of the truly untalented actors that have rushed to The CW – to complain about when it comes to talent in acting. It’s the people who call Black Panther overrated when Infinity War is literally just a mediocre sequel to the decade of films that came before it and only introduces one new thing to the MCU: mass extinctions.

With Loki, I personally got a response from someone on one of my tweets talking about the “Kylo Ren is a POC thing” – which I’d only heard of at that point – and referencing the Loki fandom trying to act like he’s a POC because he’s literally blue like twice.

The second one, the Kylo Ren one, is from someone who literally opened their five-paragraph response to a message asking them to clarify about how Kylo Ren isn’t white with:

The actor for Kylo Ren isn’t white, he’s from America yes but that doesn’t make him white. His skin tone is tanner and his facial features imply that he has some sort of ethnic background. I don’t remember making this comment though, I don’t remember the post either, probably something involving the whole white privilege BS with kylo Ren, ya know because for some reason skin tone is super important for Kylo’s character when literally his skin tone has nothing to do with anything involving his character.

I could do an entire “What Fandom Racism Looks Like” installment on this post alone because it’s one of the most ignorant and racist things I’ve ever seen in any fandom – even the already ridiculously racist Star Wars fandom post-The Force Awakens.

What I will do is point out that this paragraph alone is full of racist nonsense that is later repeated across the long response. Even as the original poster rejects Kylo (and Adam Driver)’s whiteness and access to white privilege because race doesn’t matter/exist in Star Wars (despite the presence of a flat out human supremacist organization ruling the galaxy), they double down on its existence and relevance to ours. They reinforce his whiteness by trying to reject it, as weird as that may sound.

The end of the paragraph claims that “literally his skintone has nothing to do with anything involving his character”, but his whiteness absolutely does. If Kylo Ren/Adam Driver weren’t actually white, he wouldn’t have the fanbase that he does or people trying to remove him from privilege.

The Derek Hale one was the newest and the weirdest. A friend linked me to a screenshot of a tumblr user’s tags in which they sad that:

First things first, this person somehow clocked the incredibly pale Tyler Hoechlin as a person of color but not half-Mexican and light brown skinned leading actor Tyler GARCIA Posey (who was cast to play Jennifer Lopez’s son in Maid in Manhattan as a child and has talked about being a Latino).

The Teen Wolf fandom –especially the Stiles/Derek shippers – made a point out of saying that they couldn’t be racist to/about Tyler Posey or his Scott McCall because they couldn’t tell that he/Scott were people of color. For years, Scott and Tyler Posey were subject to some serious racism from fandom but it was all brushed off because the fandom swore that they were both white.

Fandom has never treated him as if they thought he was white. They gave pieces of his personality to white characters. They constantly decentered his narratives and got pissed at the idea that he was the lead character. They even made his trauma about other characters – when they weren’t mocking him for being flawed.

Think about how the response to Princess Weekes’ piece on how Scott McCall deserved more fandom love was… lots of Teen Wolf fans descending en masse to inform her how wrong she was and how Scott/Tyler actually deserved the treatment that he got from fandom. You know, treatment that wasn’t related to race despite how it absolutely looked exactly like the racist treatment that many characters and performers of color get from fandom.

Only one of the three – the Loki one – was a troll.

That being said, however, the idea that Loki is somehow marginalized on Earth and in Asgard because of the blue skin that pretty much no one knows he has – particularly the idea that he deals with racism akin to what people of color face on Earth – and that he’s “basically” a person of color is actually something that shows up in a lot of stories in the Thor fandom.

I used to read a ton of Thor stories and I remember that a recurring theme of Loki’s existence was having him deal with xenophobia on Asgard (for a secret that again, no one knew about) and sometimes flat out racism including (invented) racial slurs against frost giants and Loki needing to be defended by allies. I even once screenshot a Tony Stark/Loki fan on twitter who claimed, entirely serious by the way, that they used their ship to somehow explore themes like internalized racism.

I get that it’s hard to “git gud” when it comes to understanding race and racism – especially when it relates to your hobby and you might not experience racism on top of that. I get it. I also understand that we live in a world where media focused on having white people experience in-series racism because they’re aliens or werewolves is very in.

We are all very used to stories that use the real world oppression faced by people of color layered over white characters directly (the way that The CW show Starcrossed took themes of school segregation and racism directly from the Little Rock 9 and layered it onto white aliens including a group called the Atrian Seven).

But that doesn’t mean that these characters somehow lose their whiteness or gain some kind of inherent or automatic POC-ness. That’s not how any of that works.

The fact that there are any people that think it does? Is a weird problem.

I know that the second folks saw them, they were written off. They were all dismissed as trolls and the attitudes as something that “doesn’t happen” in fandom. And that’s not technically true.

Sure, there aren’t droves of folks in fandom that literally think that some kind of inherent POC-ness can be applied to white male characters in a 1:1 ratio. However, there are an overwhelmingly large amount of people in fandom that keep trying to remove these white dudes from their privilege and make them marginalized as a response. They try to present white maleness as neutral and, when that doesn’t work, they try to claim that there’s something about these characters that makes them marginalized and somehow removed from criticism.

But those white boys aren’t going to stop being white or having white privilege because of it.

Zina writes about comics, nerd history, and ridiculous romance novels when not working frantically on her first collection of short stories and complaining about stuff. One day, she'll settle down and write that novel.
View all posts by Zeenah →
This entry was posted in What Fandom Racism Looks Like and tagged fandom racism, kylo ren, loki, Teen Wolf. Bookmark the permalink.