Note: I received a copy of this novella from the publisher as part of my participation in the blog tour for Pure Textuality  in exchange for an honest review. (Pure Textuality is also hosting a giveaway of a paperback of the first novel in the series! Yay giveaways!!) 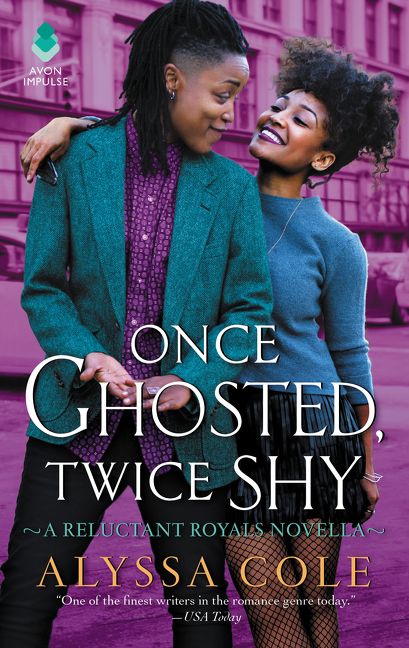 While her boss the prince was busy wooing his betrothed, Likotsi had her own love affair after swiping right on a dating app. But her romance had ended in heartbreak, and now, back in NYC again, she’s determined to rediscover her joy—so of course she runs into the woman who broke her heart.

When Likotsi and Fabiola meet again on a stalled subway train months later, Fab asks for just one cup of tea. Likotsi, hoping to know why she was unceremoniously dumped, agrees. Tea and food soon leads to them exploring the city together, and their past, with Fab slowly revealing why she let Likotsi go, and both of them wondering if they can turn this second chance into a happily ever after.

At this point in my life as a romance reader, I can safely say that I love Alyssa Cole’s writing more than I love naps. If you know anything about me, you’ll how much time I spend sleeping at the most ridiculous parts of the day and how much napping is part of my “routine” Me saying that her writing is better than the naps I take at least once a day? Now, that is a serious claim to make.

Once Ghosted, Twice Shy, a lesbian novella set in the already established world of Cole’s Reluctant Royals series, is everything I’ve ever wanted in a romantic comedy and more besides. From the cover – which has a gorgeous photograph of the super Black and super gay couple inside dressed to the nines and clearly in love – to Likotsi’s list of things she wants to do in New York to the way that Cole balances the heavy tension of Fabiola  and Likotsi reuniting with some of the goopiest fluff this side of a cotton candy machine, this is peak rom-com.

And I mean that in the very best way.

After Fabiola ghosts Likotsi months before on the trip to New York that gave us A Princess in Theory, Fab and Likotsi get a second chance at a meet-cute when Fab spots Likotsi’s dapper self on the train coming back from Brighton Beach. Internally, Likotsi is bruised and more than a little bit bitter from what was basically a breakup. At the same time, Fab is nervous and scared of opening up. Together, they’re two delightfully awkward women dancing around the rhino in the room that is their previous attempt at a relationship and the secrets they still have between them.

Partway through reading Once Ghosted, Twice Shy on Christmas, I actually tweeted Alyssa Cole to let her know that I was already pretty much in love with Fabiola and Likotsi. I still can’t figure out if want to be both women or if I want two girlfriends just like them. Geez. How are they so amazing??

I spent much of my time reading this book making obnoxious noises and telling anyone nearby (my mom, sister, and assorted niecelings) how much I loved the romance in this book and how relatable both of the leads were. I read some of the more worksafe parts to my nearest nieceling because Cole’s writing was so stunning that I felt compelled to make sure that she knew that I was having a life-changing reading experience.

If here’s one thing you need to know about Once Ghosted, Twice Shy, it’s this: this is the second-chance romance that you all deserve to read, especially if you’re a queer romance reader that wishes more ladies of color got centered in the genre’s fiction.

No lie, I fell so fast and so hard not for the warm and charming romance that plays out across this novella. Fab and Likotsi are fantastic protagonists and Cole expertly utilizes a dual but alternating third person-POV across the novella in addition to taking us between the present day and the past of their relationship. Cole doesn’t make us work too hard for the happy ending, but the road to romance is pockmarked by rom-com obstacles and the very serious problem of how families are harmed by this country’s immigration policies.

Alyssa Cole is a major marvel of the romance genre and Once Ghosted, Twice Shy is yet more proof that she’s a romance writer to be reading.

Content Warnings/Notes: nothing noteworthy
Are There Sex Scenes/Sexual Content?:  Heck yeah
What I Liked Most About It: queer black ladies getting their loev on, Fabiola’s fashion sense , the use of past/present split chapters to flesh out the past events, Likotsi is a black butch lesbian she was basically made for me to fall in love with I’m so weak
What I Could’ve Done Without: N/A
Where Y’all Can Buy It:  Amazon  |  Avon Romance | Barnes & Noble
Author’s Website/Social Media: Alyssa Cole @ Twitter | Website
Rating: Super Highly Recommended