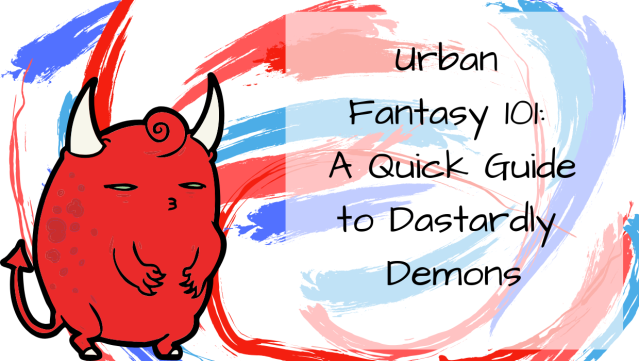 Demons are another urban fantasy and paranormal romance staple and, like the vampires and shifters I’ve written about before, they encompass a wide range of various supernatural species across different cultures. A demon in one urban fantasy or paranormal romance series might not be recognized as a demon in another and, generally, these demons don’t look like the ones in demonology around the world.

What even are these demons?

We talked about this in UF101: Mythology Soup: sometimes, we squish a whole lot of things together that maybe… don’t quite need to be squished together. In the urban fantasy and paranormal romance genres, demon can sometimes count as an umbrella term under which a whole bunch of other supernatural beings are expected shelter.

Case in point? In Hannah Jayne’s Underworld Detection Agency series, the term “demon” kind of encompasses anything that’s not human. That includes “actual” demons like the kind we’re used to seeing as villains of the hour on episodes of Charmed and Supernatural and other supernatural species that aren’t typically associated with the demonic. Like werewolves, zombies, and vampires.

In the UF and PNR books that aren’t so free with their definitions, the term “demon” can refer to the aforementioned “actual” demons (usually with complicated names full of clunky consonants), incubi and succubi, and fallen angels. Oftentimes, the authors’ grasp of demonology is wildly Western, but I’ve seen authors enfold supernatural beings like the Japanese kappa and the Scottish kelpie under that umbrella of Western demonology.

When you crack open an urban fantasy or paranormal romance novel, there’s honestly no set-in-stone approach to demons. Every author has their own approach and while Western authors brought up in the Christian church tend to subscribe to an ethnocentric, Western approach to demonology (because that’s kind of how that works, I guess) as their base to build off of, a lot of what they build?

The Good, the Bad, and the Awfully Upsetting

Why (I Think) You Should Be Reading Stories About Demons

Obviously, you shouldn’t read stories about demons if oft-casual use of demons in fiction makes you uncomfortable because of your religious beliefs. However, if you’re thinking about getting down with some of the dastardly demons in the urban fantasy and paranormal romance genres, here are five reasons why I think you should:

WOC in Romance’s page on demons

A Ferry of Bones and Gold by Hailey Turner

Superstition, a recently canceled Syfy series about a family of Black demon hunters

What are your thoughts on demons in urban fantasy and contemporary paranormal romance books? Have you read any of the books I’ve recommended? What are some of your favorite books on demons in these genres?

Zina writes about comics, nerd history, and ridiculous romance novels when not working frantically on her first collection of short stories and complaining about stuff. One day, she'll settle down and write that novel.
View all posts by Zeenah →
This entry was posted in Urban Fantasy 101 and tagged demons, urban fantasy 101. Bookmark the permalink.

3 Responses to Urban Fantasy 101: A Quick Guide to Dastardly Demons