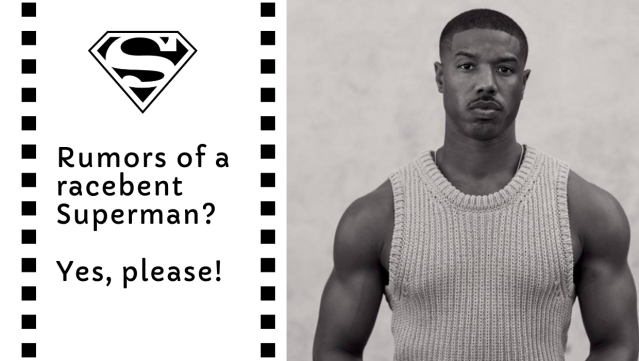 I’ve been sitting on my thoughts about the future of Superman’s presence in the DCEU for a while, but I’m done being introspective so it’s time for me to talk about these rumors.

Rumors that Henry Cavill might be exiting the DCEU have been swirling around for a while (and none of us nerds are quite sure what’s actually happening), but what’s new and interesting are rumors floating around that Michael B. Jordan’s star is shining so brightly that he’s actually a possible top contender for the role when they eventually return to a Superman-focused franchise. 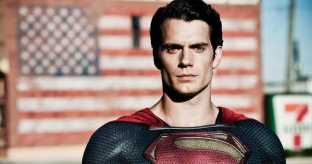 I love Henry Cavill like I love naps – endlessly, deeply, and can I have some more – and while I’ll actually miss him as Superman because I genuinely liked Man of Steel and Justice League, I’m so cool with the cape going to a performer of color the next time they reboot the franchise.

Regular Stitch’s Media Mix readers probably know that my feelings about racebending are almost entirely positive. I think that when the creators put some thought into how racebending a “historically white” character can change their narrative and how they’re seen in their world, racebending can be an amazingly nuanced and thoughtful way of adding more diversity to a piece of media might otherwise lack it.

And, let’s be real here, racebending Superman in a future live action series or film just has a ton of potential. I’m saying that as a fan of almost every single actor to play the role in the history of the character – yes, even Brandon Routh. 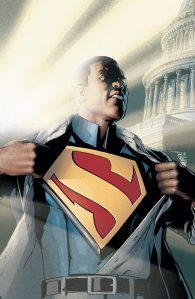 Racebending Superman in 2018 and beyond wouldn’t just be an inspired choice, it’d be a timely one because while we’ve had non-white analogues and versions of Superman before, they weren’t franchise-leading takes on the character.

(Fun fact, by the way: we’ve also had different Elseworlds mini-series – like Superman: Red Son and Superman: True Brit – where Kal-el isn’t raised in Kansas and doesn’t come to represent anything close to representing “the American way” that became part of  Superman’s catchphrase around the time of the “Adventures of Superman” radio show.

Not only was there a Black Kalel in Grant Morrison’s Earth-23 and the DC Comics/Milestone Media hero Icon and Dean Cain’s Clark Kent in Lois and Clark: The New Adventures of Superman, but Superman: Secret Identity introduced the two biracial Indian daughters of that world’s Clark Kent.

And, let’s be real here: a whole chunk of kids of color in the Nineties grew up thinking that the brown(ish)-skinned Clark Kent on Superman: The Animated Series was one of us.

Out of a whole list of truly talented actors, Michael B. Jordan currently has the best odds to play Superman the next time that the franchise gets rebooted. And, if you look at how popular Michael B. Jordan has become in the past couple of years alone, the odds make sense.

His character, Erik “Killmonger” Stevens was one of the most compelling complex villains we’ve gotten out of the MCU so far. Oh, and Black Panther went on to make bank at the box office and home-video sales. (I’ve seen it like ten times so far…)

His role in Creed revitalized the flagging Rocky franchise and studios appear so confident in the sequel’s success that it’s coming out on THANKSGIVING WEEKEND in the US. One of the biggest weekends for film releases in the States.

How about how every single thing he and director Ryan Coogler collaborate on does ridiculously well? If they get Coogler in on a Jordan-led Superman film, it could be a major money maker for WB and (hopefully) change the face of their films!

If I had a movie, I’d want to cast him in it because he clearly puts butts in seats!

Unsurprisingly, I’m entirely down for Michael B. Jordan as Kal-El and if it ever comes to fruition – because there are almost too many rumored DC projects to keep track of, and a bunch of them don’t seem to be going anywhere – I’ll probably be the most extra about this whole thing.

I’m a lifelong Superman fan and I’m well-versed in the history of the character (including the very Jewish origin story behind his creation). I definitely believe that casting Michael B. Jordan in the role could be an interesting way to see how Blackness could change the Superman story because I kinda want to know… how would Blackness shape his path to heroics considering Black people are seen in the US? (Sure, I could probably write that fanfic just fine on my own, but if there’s a chance that DC’s going to do the heavy lifting for me in the future, I’m going to roll with it.)

Now, I’m nosy and love hearing from y’all: since I know there are some people who aren’t a fan of Michael B. Jordan’s acting or his face (like my sister), who would your go-to casting choice for a racebent Clark Kent be?

Stitch writes about what needs to be written.
View all posts by Stitch →
This entry was posted in Movies and tagged fancasts, Michael B. Jordan, racebending, Superman. Bookmark the permalink.

4 Responses to Rumors of a racebent Superman? Yes, please!