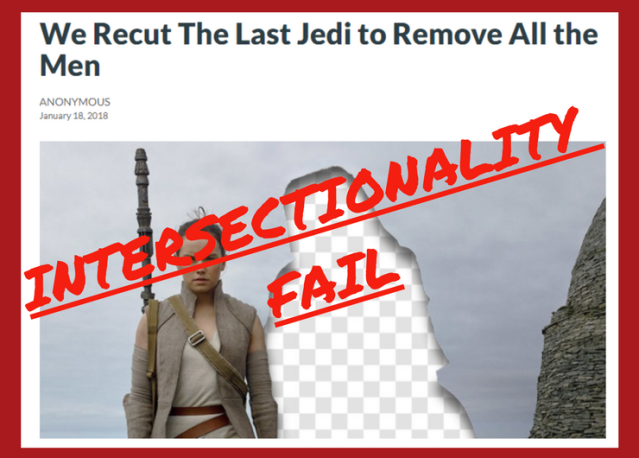 I think at this point, we’ve all seen (and mocked) the misogynistic re-cut of The Last Jedi that cuts out all of the women. The re-cut film takes out all of the women in The Last Jedi in order to get rid of all the gross cooties that the women of Star Wars apparently has. Significant plot points were changed in order to center male characters with the gist of the projects being to keep men and male characters in charge and blah blah blah.

The end result of the “Defeminized” cut of The Last Jedi is a shoddy mess that’s not even fifty minutes long. It manages to be misogynistic and racist (in cutting out Kelly Marie Tran’s Rose Tico and Veronica Ngo’s Paige Tico) and boring as hell. There aren’t that many men in The Last Jedi to make a cohesive story come out if they’re the only characters present.

But cutting the men out of The Last Jedi in response to misogynistic Men’s Rights Activists is not the answer and winds up being just as problematic for similar reasons.

On January 18th, Dorkly published an article by an anonymous contributor where they talked about cutting all the men out of The Last Jedi. It’s clearly a pseudo satirical reaction to the MRA re-cut of the film, which I get but let’s be real here: this is a major intersectionality fail and something that I found really frustrating because it just does the same racist crap that the lady-less edit does only… it manages to basically erase ALL of the characters of color with significant screentime in a way that the misogynistic MRA recut… doesn’t.

Cutting the men from the film places men of color on the same level as white men in terms of who has power in oppressive patriarchal hierarchies and ignores the fact that men of color straight up do not get treated the same way as white men even in this film.

It isn’t just that this anonymous poster, like many members of fandom, thinks nothing of erasing John Boyega’s Finn and Rose in the name of White Feminism ™, but that they spend much of the article putting Oscar Isaac’s Poe Dameron down with “witty” commentary that ignores how out of character his portrayal in The Last Jedi was in the first place. One example is where the author of this post replaces Poe Dameron in the opening scene and bombing run against the Destroyer with BB-8 and writes that:

“The entire sequence plays out differently without Poe doing manly things like disobeying commands from a superior officer, going rogue and getting a good chunk of the Resistance killed. BB-8 is spunky, sure, but it’s not going to disregard a direct order from General Leia.”

This post disses Poe throughout, calling him “impulsive” and claiming that his leadership would “result in hundreds of people barreling head-first into danger”.

If that’st not enough, just like lady-less edit, The Last Jedi: The De-Meninized Fanedit also cuts out Finn and Rose in the Canto Bight scene and their entire adventure with Bencio Del Toro’s DJ. The post writer cuts the Canto Bight scenes because they claim that the plot focuses on Finn’s motivations and DJ’s betrayal, writing that, “It was tough to lose Rose and her connection to the furry alien racehorses, but this is nothing if not a movie about sacrifices”.

Let’s pause right here to talk about how fandom racism and White Feminism ™ intertwine in this entire idea of a “De-Meninized Fanedit”.

Look, I’m not a fan of the original Canto Bight scene and the fact that so much of Finn’s genuinely caring and insightful personality got thrown to the wayside by the time Rian got through with him. However, the scenes on the casino/pleasure planet are important because of the fact that you have two characters who represent major milestones in the Star Wars franchise adventuring together.

Cutting Finn (and Rose) out of your recut because Finn is too present, is a problem.

I don’t care that this is supposed to be sassy and satirical. I’m annoyed by the fact that this dude-free recut of The Last Jedi is doing what transformative fandom and supposedly progressive feminist spaces always do: cut down (or out) people of color to center on white characters and push a sort of super performative progressiveness.

If you cut out Poe and Finn, the two men of color with recurring scenes in The Last Jedi, and cut out Rose, the only woman of color to recur in the film, what exactly is left? Who exactly are left?

A whole lot of white women doing stuff in space without those pesky people of color getting in the way and a few fish nuns played for jokes.

I’ve talked about this before (a lot). It frequently feels that fandom is constantly asking people of color (and especially queer women of color) to choose whiteness – white queerness or white womanhood – over our ethnicity. (Back when The Force Awakens came out, young adult novelist Maggie Stiefvater actually took to tumblr to bemoan the fact that people were supposedly focusing more on Poe and Finn than on Daisy Ridley’s character and it was very much a “I’m seeing a lot of women talk about these men and it’s a problem” situation.)

This De-Meninized Fanedit is a prime example of that.

It ignores the fact that the misogynists that created the lady-less version of the film probably don’t like people of color that much either but that cutting white women and people of color out of The Last Jedi would’ve basically turned this into the Kylo/Hux show with bonus Luke Skywalker. It cuts out a Black male character who already didn’t get that much screen time compared to the last film in order to… make a point about misogynists being bad.

White Feminism ™ is so harmful because it consistently and constantly centers white womanhood above everything (and everyone) else. I’m sure that the person working on this fan-cut thought nothing of the fact that they were lumping characters of color in with white men in their cuts (“Removing men from Star Wars does throw things off balance and the result is a bit rough around the edges, but it does substantially cut down on characters whining about not getting their way”). or that they were replicating much of the racism present in the lady-free cut with their work.

People of color don’t matter and aren’t even treated as important to the plot beyond their sacrifices or complaining about their actions onscreen. The de-meninized cut of the film cuts out much of Rose’s on-screen presence – and probably cuts out Paige as well considering that the goal is to undo Poe’s actions in the film. So much for solidarity there!

As a Black person in the Star Wars fandom, do you know how much it sucks to see people talking about/sharing a post about a recut of The Last Jedi that erases the only character that looks like me?

The Last Jedi: The De-Meninized Fanedit fails at being interesctional in its feminism and as a result, winds up being peak White Feminism™ in fandom.

Fandom needs to do better because this is ridiculous and alienating.

Stitch writes about what needs to be written.
View all posts by Stitch →
This entry was posted in Fandom, Rants. Bookmark the permalink.