[Book Review] All About Mia by Lisa Williamson 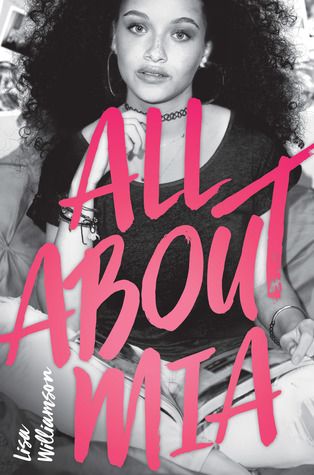 Note: Please message me if you require trigger/content warnings for this novel beyond the alcohol abuse I reference in my review.

One family, three sisters.
GRACE, the oldest: straight-A student.
AUDREY, the youngest: future Olympic swimming champion.
And MIA, the mess in the middle.

Mia is wild and daring, great with hair and selfies, and the undisputed leader of her friends – not attributes appreciated by her parents or teachers.
When Grace makes a shock announcement, Mia hopes that her now-not-so-perfect sister will get into the trouble she deserves.
But instead, it is Mia whose life spirals out of control – boozing, boys and bad behaviour – and she starts to realise that her attempts to make it All About Mia might put at risk the very things she loves the most.

A good summary for All About Mia is:

LOCAL MIDDLE CHILD HURTS HERSELF AND OTHERS ON HER WAY TO FIGURING OUT HER PLACE IN THE WORLD.

I mean… at least I think so at least.

I’ve got complicated (but mostly positive) feelings about Lisa Williamson’s All About Mia.

Caught between her “perfect” older sister Grace and her “primed for the Olympics” baby sister Audrey, Mia doesn’t feel as if she has anything that’s truly her own. Her sisters get what appears to be the focus of their parents’ positive attention and Mia, a chill teenager who likes to party a bit too intensely, gets yelled at… a lot and feels super overlooked by everyone in her family unless she messes up. She feels super overlooked in favor of her sisters and that… kind of leads to acting out in the form of drinking and staying out with her friends.

When her sister Grace returns with both a boyfriend (Sam) and a bun in the oven (nicknamed “Bean”), Mia assumes that it’ll be her sister’s turn in the hot seat. Unfortunately for Mia… their parents seem to get over the stress of that little revelation and dive right into their role of happy grandparents.

Mia starts the novel out with her core group of friends who she’s known for years: Stella, Kimmie, and Mikey.  They’re her party crew and the people she turns to when her family disappoints or overlooks her. While Mia loves her family, she can’t talk to them about most of the stuff that happens in her life. Which is where her friends come in.

However, Mia’s self-destructive tendencies (tendencies that are on display throughout the novel) wind up disrupting not only her relationship with her biological family, but also with her found family of friends. It’s… stressful.

In All About Mia, our titular character makes a lot of mistakes. Mistakes that include a botched attempt at seducing a much older neighbor (which is described onscreen and definitely FAILS) and breaking one of the core rules of friendship: going after a friend’s crush.

One thing that almost always precedes her big messes is… alcohol.

I’ve seen a review calling Mia an alcoholic and while I think that might be a bit harsh (I’m sensitive, you see), she definitely doesn’t have a healthy relationship with alcohol. She’s also well… sixteen so she shouldn’t be having any relationship with drinking.

But for me, this was the most relatable part of All About Mia. When I was her age (well… a little older), I used to drink a lot. A lot more than I currently do. I would go out with my friends who were older than I was and I’d drink with them. At eighteen I was coming home stumbling drunk and frequently had to hide the evidence from my family.

I also made huge mistakes and got in serious trouble because of my drinking. There are two scenes where Mia, after drinking a ton, doesn’t remember where she was or who she was with and I mean… Wow. It was terrifyingly familiar for me to read.

I think that All About Mia is a complicated book about sisters and family that winds up being a really good book about teenage drinking and the mistakes that you can make/messes you can wind up in as a result.

A major positive for the novel is that if you liked the now canceled BBC high school series Some Girls, you’re probably going to like this.

As the protagonist, Mia is occasionally unlikeable and definitely moody, but she’s also A GOOD KID. Williamson’s writing and the first person POV combine to make you feel as if you’re literally sitting on Mia’s shoulder as she goes around her world and deals with these super stressors that would leave even the adultiest of adults feeling overwhelmed and adrift. So you’re sucked into this story and you feel like an angel on Mia’s shoulder and by the end of the book, all you want is for her to succeed and do the right thing.

A minor negative for the novel (for me) at any rate is that I felt that it could’ve done a bit more work to show the diversity of Mia’s family.

Mia is biracial and Black and the novel does acknowledge that in ways that are very positive and not “very special episode”-ish about it. But because we’re in Mia’s head and she’s portrayed very much like the “average” teenage girl, there’s this lack of hmmm… consciousness of the fact that she’s not. Not in this genre at any rate.

Mia’s lack of consciousness of her Blackness (it’s a nonissue beyond maybe the first few chapters) is very much in line with the ‘typical teenager” take on her story, I felt that I would’ve appreciated more nods to her and her sisters’ Black identities and how it affects their lives. I’m torn between wanting more direct nods to her Blackness in the text and recognizing that that would’ve had a great potential to go badly.

All About Mia was a good book for me. I read it in several sittings because it was just such an intense read that reminded me of my own youth. I enjoyed it, despite some rough moments in the way that Mia’s drinking was almost… triggering at times (which is literally a “me” problem).

Also, the last like… three chapters made me cry because Mia and her sisters (and Sam, Grace’s boyfriend) really are such good characters and I want them to be happy forever.

Crying at the end of a book because you enjoyed it so much is always a bonus, I’d say.

Stitch writes about what needs to be written.
View all posts by Stitch →
This entry was posted in Book Reviews and tagged All About Mia, black women, book review, Coming of age, Contemporary, Diverse fiction, Lisa Williamson, Young Adult. Bookmark the permalink.
Loading Comments...