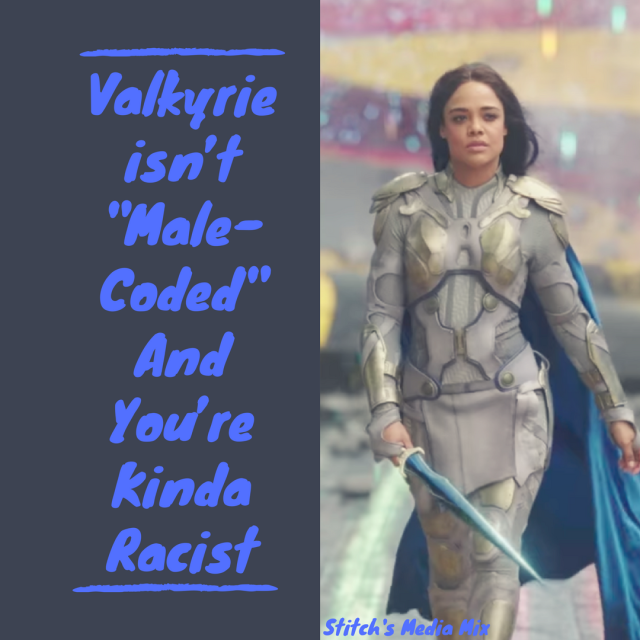 Every time a nerdy piece of media dares to center a Black woman in some way, White Feminists in fandom show up to show how much they don’t care about Black women.

You can go through my archives for the past three years to see the different ways that White Feminism has failed Black female characters and the fans that love them. I don’t need to go through how Black women are constantly desexualized or ignored or mistreated by fandom in the name of (White) Feminism.

In the wake of Thor: Ragnarok, I had the… unwelcome opportunity to see such dismissive content play out in the form of an Italian viewer whose attempt at tackling the film (and Tessa Thompson’s Valkyrie) showed the most basic grasp of gender performance and doesn’t bother to bring intersectionality to the table.

I’m not going to link to the original post or her blog, but I will quote it heavily because it is, word for word, emblematic of the way that seemingly progressive people in fandom talk about Black women in dismissive and dehumanizing language.

Let’s start at the end, where the OP goes:

Valkyrie’s character was written exactly like a “tragic male character”, then they took a female actress for the role because they realized they didn’t have enough female speaking characters (read: none other than Hela) to pass the Bechedel test. Spoiler alert! They still don’t.

The Bechdel test is supposed to gauge whether or not someone would watch a movie. It’s a fast and dirty way to save money by not watching films where women don’t speak to each other – or if they do, they only talk about a man – and a rudimentary feminist commentary on the maleness of the movie industry.

It’s not a particularly intersectional approach to take when critiquing film or the film industry.

Not all films are made in the same mold.

He’s Just Not That Into You is a 2009 film where the majority of the cast is made up of women who do have conversations with each other (however infrequently) about things other than the men they fall in love with.

There are no women of color in the main cast and, as far as I can remember, no queer characters.

I’ve seen Atomic Blonde, a film where the only non-white female character with a speaking role appears to be killed off, called feminist. Same goes for Girls, Bad Moms, Wynona Earp, and Jessica Jones. All of these pieces of media have women interacting with each other about something other than a guy, but those shows or films primarily center white women with women of color either absolutely absent from the narrative or were minor characters.

In Pacific Rim, Rinko Kikuchi’s Mako Mori is the only woman with a significant speaking role and everyone she interacts with is a man. However, she is a Japanese character whose relationship with her Black British adopted father is central to the film and will be relevant in the sequel film.

White people in fandom bent over backwards to talk about how “unfeminist” Pacific Rim was because it didn’t pass the Bechdel Test. For months.

Media that centers women of color is frequently shut down and dismissed as “unfeminist” by the same White Feminists that hype up every faintly diverse story out there with two (white) women that interact with each other.

Even if they hate each other.

Even if people of color suffer.

Even if the narrative is actualfacts bigoted in some way.

Maybe Thor: Ragnarok doesn’t pass the Bechdel Test, but you know what else doesn’t?

The other two Thor films (Sif, Jane, and Darcy largely don’t talk to each other about anything other than Thor…)

All of the Marvel Cinematic Universe films where Scarlet Johannson’s Black Widow makes an appearance.

But I’ve never seen a White Feminist decry ScarJo’s portrayal of Black Widow as “unfeminist” or drag the Bechdel Test out of bed to make a point about how bad her film appearances have been.

And yet, Valkyrie’s presence as a supposedly “non-normative” female character is written off as the director and script writers just thinking that all they needed to get progressive points was make a male character but cast a woman in the role. Their words, basically.

But here’s the thing, that’s such a dang reductive way to talk about Valkyrie.

The original post starts with the OP having a problem with Valkyrie:

my problem was with Valkyrie, more specifically with the fact she’s male coded. Heavily so.

To the original poster, Valkyrie is “male coded” because:

The OP calls Valkyrie’s backstory ”boring and pathethic [sic]” because so many male characters have it.

And that’d be a bad call even if Valkyrie wasn’t being played by a Black actress.

Of course, white guys with tragic soldier backstories are boring because we’ve got like… dozens of them. But when a marginalized person gets that backstory and that role – ostensibly taking the place of the boring white guy with manpain galore – they make it better. They make it more relatable.

There’s a reason why people basically shit themselves when faced with diverse retellings of fairy tales or classic stories: we’re starving for representation.

And Valkyrie, despite this weirdo’s ultra basic grasp of gender theory, provides representation to girls and women of color. Valkyrie’s whole thing is sensitive queer warrior woman finds her people again. She’s healing, she’s hurting, and she’s going through so much. To act like this is the same narrative that you’re getting from like… yet another World War II movie or Nameless Action Film Number 55 is beyond incorrect.

Valkyrie is a sensitive, multifaceted character who pushes past her pain in order to do the right thing and winds up starting to heal because of it. She’s a war veteran and a queer woman who lose EVERYTHING she loved and the unit she was a part of. You can’t ignore what her arc in the film – or what Hela did to her crew – means when you connect it to queer survival.

You can’t pretend that it exists untethered to centuries of queer and brown people hurting and healing.

If you, like the original poster, thinks that Valkyrie wasn’t good as a female character (“but hela was pretty great even if she has a bit of the same problem”), maybe you’re not in a position to understand that…

I’m actually going to pause here and provide a quote from the brilliant review “Thor Ragnarok: A Very Indigenous Film” that shoes exactly what Valkyrie represents and how important it is to have Tessa in the role.

Another character who I adored is Scrapper 142, who is widely known as Valkyrie, played by Tessa Thompson a proud Afro-Latina. Valkyrie represents what it’s like to be Native and resisting colonisation. She is very much so coded as being an Indigenous woman. When looking at the context of where Thor: Ragnarok is filmed and who it’s directed by, Valkyrie can be read as both Black (Aboriginal or Torres Strait Islander) and Māori. The way she paints her face is similar to how Black people paint up before dancing, celebrating, welcoming people to country and so much more. As seen below, it is no coincidence her face paint looks familiar to the Black fellas from the Yugambeh mob.

Looking even closer at Valkyrie, you see this sense of displacement, of not knowing or feeling like you are who you are. She is inevitably lost. Her identity is stripped from her, she is in a different land, a prison. Culture makes and sustains identity for Indigenous people and without it, you’re in limbo, you feel like you’ve been drained of Mana, you’ve been drained of what makes you, you. It’s this constant inner battle of trying to know who you are and understanding how you know who you are. Valkyrie’s essence and what makes her Indigenous has been taken away, disrupted. Hence the alcohol, hence the trauma and the layers to her personality. This is what it’s like to be Indigenous. Valkyrie is the embodiment of Black resistance and pain in Australia.

If you don’t – or can’t – understand exactly what Valkyrie represents, you have no business talking about her.

And many people who will insist that their feminist leanings mean they get the right to dismiss Valkyrie and talk about her like she’s not indicative of two cultures/people being represented rather respectfully have ZERO business talking about her.

To carry on: one of the problems the OP had with Valkyrie is that she doesn’t “behave” like a woman and, pardon my language, but I call bullshit.

What kind of gender essentialist nonsense is this?

What kind of “there’s only one way to be a woman or else you’re wrong” nonsense is this?

The OP literally wrote that:

The only difference between [male army vets in fiction] and Valkyrie is that she has a female body. But only that, her body, because nothing in her behaviour, gestures, way of speech or anything at all shows the slightest hint of female feelings or qualities.

Without even having to leave franchises, I can tell you that Valkyrie and Jessica Jones share a TON in terms of what the OP complained about.

Their body language, gestures, speech, DRINKING TO DEAL WITH TRAUMA…

All of those are things that they share in some way.

All of those are things that folks with the most basic, racist grasp of gender-as-performance would read as “masculine”.

Then it’s a blow against feminism or a return to the patriarchy.

The OP goes on to claim that, “Loki is more feminine than she is (which is arguably intended by both writing and acting, but that’s another matter).  Gosh, even Thor has feminine bits and pieces!”.

(While Loki in the comics is supposed to be genderqueer, I don’t believe any such claim has been made for the MCU.)

It’s that gasping “oh even he is more of a woman than Valkyrie is” way that ignores that there is ZERO consistent way to be a woman aside from straight up IDing as one.

This is that thing people do where they say Black women are really men. It’s that thing fandom does where they try to delegitimize Black female characters’ relationships with their white faves.

Please, think about the way that the Williams sisters have spent years of their lives in the spotlight having their gender questioned and mocked. Think about the language used to describe Black people as inherently bigger and badder than white people.

I mean, the whole post is a hot mess but here’s the thing: it’s still the norm for what fans of Black female characters see the very moment that they get significant screentime.

Claims of Valkyrie being “male-coded” and then for that coding to be considered a bad thing is textbook fandom racism.

Seriously, Valkyrie isn’t male coded and the claim is a racist one off the bat.

I find it laughable because… I’m a Black femme that’s constantly ready to fight. I drink (not so much to deal with pain, but eh…). I am pretty darn “non-normative” when it comes to the way that Whiteness portrays and prefers its women.  I’m a lot like Valkyrie… personality wise.

Does that make me male coded as well?

(According to fandom’s weaksauce grasp on gender theory and refusal to let go of misogynoir all over the place, it probably would…) 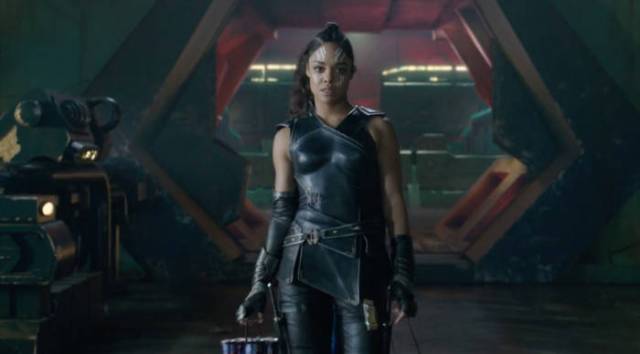 If you found this post useful, consider supporting me via PayPal or by buying a book off of my wishlist!

Zina writes about comics, nerd history, and ridiculous romance novels when not working frantically on her first collection of short stories and complaining about stuff. One day, she'll settle down and write that novel.
View all posts by Zeenah →
This entry was posted in Fandom, Rants and tagged fandom racism, marvel cinematic universe, misogynoir, thor ragnarok, valkyrie. Bookmark the permalink.