Luke Cage and Claire Temple: Not Your Mammy Figures 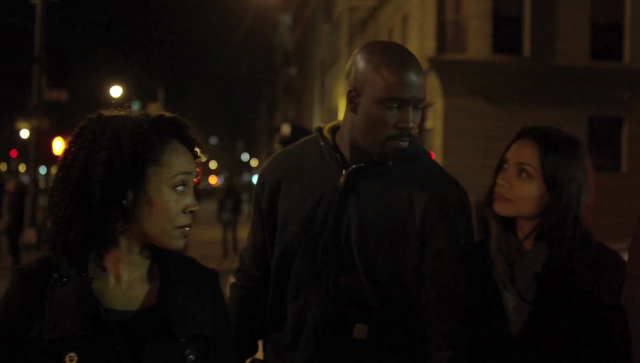 I’m used to seeing posts where Black characters are reduced to nannies for white characters, but this post I found in the “Claire Temple” tag on tumblr really took the cake:

“Something I totally see happening in Defenders is Claire telling Luke about how Danny “has some serious issues and needs professional help” and how he should “watch out for the kid”, but of course Luke was already doing something like that…

Look, what I’m saying is that Luke is the kind of wise, experienced and calm person that Danny could have such a healthy relationship with and I can’t wait to see them interact. >.<“[1]

Let’s talk about this.

There are three recurring black characters across the MCU’s Netflix series: Claire Temple, Luke Cage, and Misty Knight. That’s it. Three black characters that’ll come into contact with Danny Rand and two out of the three are frequently repurposed specifically so that they can take care of white characters[2].

Luke and Claire aren’t here for your inability to visualize them as full characters outside of the Mammy/Magical Negro archetypes and they certainly don’t owe this dollar bin Danny Rand a damn thing.

Fandom’s desire for them is basically to see them serve as Danny’s nanny. But here’s the thing: Danny isn’t a child. He’s my age or older and yet, fandom is treating him like he’s a kid to be parented by two black characters (one who doesn’t even know him).

The problem is that a lot of nonblack people honestly only believe that Black people only matter when they’re useful (when they’re doing some kind of labor) or performing for others’ entertainment.

This is a fact, not an opinion.

The thing about how Black people are expected to provide this labor and participate in these performances is that they’re almost never repaid for it. We’re not treated as equals. We’re treated like equipment or work-horses that should keep working without complaint or criticism.

As Black people, it’s our job to explain anti-black racism to anyone that doesn’t get it. We’re told that we should be happy to guide people away from being a goofy asshole. We should always be on and ready to leap to perform for your entertainment.

We’re the mentor figure for your heroes (because we can’t be heroes apparently) or we’re the parental figures they never really had. When we’re not reframed as unfairly angry or over-complicated, we’re told that we exist to serve.

Within fandom, you often see this play out in how nonblack fans erase black characters’ canonical personalities to replace them with a Stepford Mammy personality. Across different fandoms, Black characters are almost uniformly wiped of their existing characterization and personalities in order to serve as “always on” figures that perform nothing but unpaid labor for fandom’s white favorites.

In “The Techniques of Erasure” an essay I wrote on how fandom erases characters of color from their canons and minimizes their importance in fandom, I wrote that:

When you reduce characters of color to nanny-types, you’re saying that’s all you think we’re good for. I don’t care if it’s not a conscious decision (much of these things aren’t conscious decisions as few of these people are actively campaigning against diversity), but you’re putting us and characters who look like us in roles that make you feel comfortable.

Never forget that people of color don’t exist to cheerlead your love life. We’re not around to make sure that Becky and Bobby wind up together. So why does fandom constantly decide that POC in media exist to prop up their ships?

There’s nothing wrong with a little support or even matchmaking coming from characters of color in your fanworks. There’s something wrong though with how across the board in fandom, characters of color get stuck in the background of other people’s ships and stories as the proverbial (and sometimes literal) help. Characters that represent us and our peers are reduced to helping white characters that fandom likes get ahead. Rarely do they get to shine on their own in fandom and get the same amount of respect and adoration.

In the Sleepy Hollow fandom, former main character Abbie Mills was turned into the best bro for Ichabod Crane by a fandom that couldn’t stand to see a strong Black woman be anywhere close to a love interest.

Right now, in the Star Wars fandom, many of the people that ship Rey and Kylo Ren have turned Black male lead Finn into a wingman for their ship. His relationship with Rey, his personality, and his motivation have all been given to Kylo and replaced with a generic eager to please personality that makes it easier for these shippers to distance him from Rey and help her end up with Kylo.

I could go on.

We’re told that we and characters that look like us exist “in relation” to whiteness, white characters, and white people and I’m especially tired of it here.

Luke Cage and Claire Temple aren’t characters that would eagerly rush to make Danny Rand a better person. He’s not their friend in the MCU (and in fact, The Defenders is the first time that Danny and Luke meet) They’ve got their own shit to handle and it’s not even like fandom is proposing a relationship between equals: they’re proposing a way for Danny Rand to be coddled by characters that have no interest in or business coddling him.

And if you think that they exist to make life easier for your white faves?

You need to check yourself and do some research on antiblackness.

[2] Don’t get me started on how worried I am about how fandom will handle Misty Knight’s probable relationship with Danny because that can’t end well.

Zina writes about comics, nerd history, and ridiculous romance novels when not working frantically on her first collection of short stories and complaining about stuff. One day, she'll settle down and write that novel.
View all posts by Zeenah →
This entry was posted in Fandom and tagged Claire Temple, fandom racism, Luke Cage, the defenders. Bookmark the permalink.

3 Responses to Luke Cage and Claire Temple: Not Your Mammy Figures