Every time I talk about J. K. Rowling’s current and continuing diversity fails, someone always has to show up to remind me how she “couldn’t write diversely because it was 1997”.

Without fail, people are more invested in protecting Rowling from criticism she will never see or care about than in acknowledging the way that her writing has continued to erase marginalized people while allegorizing their struggles in order to pad her plot and make her characters more interesting.

Even if I knew (or cared) more about the realities of publishing when I was seven years old, the fact of the matter is that JKR managed to put a ton of atypical things in her “kids’ series”. She wrote about the violent effects of racism and blood supremacy as well as child abuse and children coming of age in a war torn world.

And yet, she “couldn’t” include more than eight characters of color or any queer characters who made It to the end of the series alive or who were queer onscreen?

The “it was 1997” excuse for Rowling’s diversity fails only holds a scant bit of water when it comes to looking at the body of her work. Other writers wrote queer characters into their works, other authors managed to have diverse children’s books during the same period that Rowling was publishing her books.

And none of those authors changed the literal face of publishing, writing, and reading.

Maybe, and here I’m giving Rowling the benefit of the doubt, she couldn’t have gotten Harry Potter published in the 90s with more diverse characters and less allegories/metaphors for oppression. But even still, that doesn’t excuse or explain away the way her post-Potter works are more of the same.

At this point in publishing, Rowling is like the Mark Millar of young adult/kids’ publishing: she could probably get her grocery list turned into a movie if she included the opportunity for extensive CGI scenes and maybe a cameo from the Rock or Benedict Cumberbatch.

Everything she writes, sells big.

So feasibly, there’s nothing stopping her from working on projects (or working with marginalized writers on projects) where characters are diversified and we see the world beyond Harry Potter’s point of view. Nothing except for her own failings as a person and as a writer.

As a whole, the add-on site essentially does nothing to diversify the Harry Potter universe in anything but shallow ways. We don’t find out anything that expands on established characters of color or reveals anything about characters who might be marginalized but not on-screen. All we find out more information about are the same white-straight-cis characters we’ve already explored on our own over the past (almost) twenty years).

What we learn about the wide wizarding world we get in bits and snaps.

We learn about Uagadou, the only wizarding school in all of Africa that has managed to survive over a thousand years. But Rowling never actually talks about the culture of the school or why there’s only one Hogwarts-esque institution in all of Africa. (This is both due to her inability to worldbuild – i.e., we literally don’t know the population size of the wizarding world and how likely the gene is to show up — and her continuing ignorance of how the Transatlantic Slave Trade absolutely would’ve affected the Wizarding World and vice versa considering magic supposedly knows no borders.)

Then she officially canonizes lycanthropy as a metaphor for HIV/AIDS in her latest Pottermore ebooks, something that is absolutely not okay.

Because you know, the best way to deal with a bloodborne illness responsible for the deaths of so many people (especially queer men and Black women) is to connect it to the assault of children, predatory behavior, uncontrollable violence, and turning into a giant hungry wolf every full moon.

(Yes, she claimed this “inspiration” back in the Nineties but a) I was a third grader and b) that doesn’t mean it needed to be canon now. She could’ve written that it was her original inspiration but that she realized how inappropriate it was to keep it that way because that sort of thinking and writing contributes to the continued demonization of people living HIV/AIDS. But no. Werewolves are basically the magical equivalent of people living with HIV/AIDS now. Wonderful.)

In Fantastic Beasts, there’s at most a single character of color centered in the trailers or what we know of the narrative. Rowling didn’t use her considerable pull as the originator of one of the best-selling franchises in the world to get a man of color in the role or characters of color in significant roles where they are less likely to die or be at odds with the main character.

On top of that, in setting up the pre-Potter world of Fantastic Beasts, Rowling coopted the history and culture of Native American communities and reduced the multitude of diverse Native peoples to a monolith for easy audience consumption. Her use of Native mythological figures in Ilvermorny house names and in the reductive use of “medicine men” in her backstory shows a complete disregard for cultures that aren’t her own.

Instead of talking with Native authors and activists willing to educate her on the racism inherent in her treatment of Native communities, Rowling has been blocking them. You can see an example of this at the end of this piece collecting reactions to Rowling’s cultural theft and appropriation: Native People Respond to Rowling.

The producer for Fantastic Beasts seems to think that segregation in the North (in Brooklyn of all places) was so intense that the only way to have people of color in the film would be to grow them organically (or something like that). 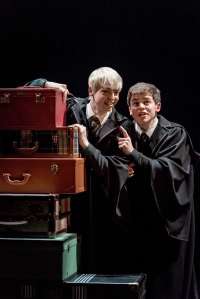 Instead of moving forward and turning subtext into text, Rowling well… doesn’t make Scorpius and Albus Severus’ relationship anything more than intensely platonic.

After building the characters’ relationship in a way that can be (and is) read as queer, Rowling pulls that away from readers with what Aja Romano refers to as “a flimsy ‘No Homo’ excuse” in her article “The Harry Potter universe still can’t translate its gay subtext to text. It’s a problem.”

In a review of the play and associated book on Fandom Following, the author actually provides examples of text that can be read as queer-coding (that becomes queer-baiting by the end of the play when Scorpius ends up happily heterosexual with Rose ).

This includes this particular bit of banter:

SCORPIUS: So we hide in a hole?

ALBUS: As pleasurable as it will be to hide in a hole with you for the next forty years . . .

For queer fans, comments like this are crumbs and we are starving.

I wasn’t in the room when Rowling wrote this play (unfortunately), so I don’t know what her intent was. But as a queer fan of her series who has read a ton of the fan fiction and meta on top of consuming her work until a point where it became uncomfortable for me, I get why people would expect something different from their relationship.

I get why fans would be hurt.

The Cursed Child plays with fan fiction tropes (some of which aren’t good in actual fan fiction) and one of the ways that Rowling does this is by focusing on the relationship between Albus and Scorpius as super intense relationship where Scorpius is literally upset at the thought of his “best friend” interacting in any intimate way with girls.

But in the end, compulsory heterosexuality swings in to make sure that we know that even a couple of generations later, no one living in the Harry Potter universe is allowed to be queer in any way. Intimate friendships (and a heaping dose of jealousy and over the top affection) can only lead towards heterosexuality for these characters. 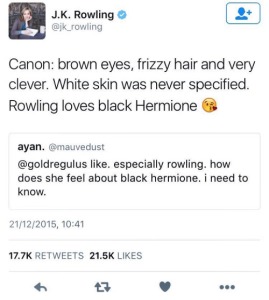 Mind you, one thing Rowling constantly does is present herself as someone who really does care about representation in media and marginalized people.

It just never shows up in her works until years after the fact (as the Dumbledore reveal was a full decade after the first Harry Potter book was released, as was her later “white skin was never specified” reveal with Hermione).

So for her to pull what reads as a bait-and-switch, knowing her fanbase and how hungry queer fans are for meaningful representation, seems more like she just didn’t think about those fans. If she didn’t want Albus and Scorpius to be endgame, whatever. But one of the two could (and should) have been queer.

There is nothing stopping her from writing that sort of representation into reality.

Right now, there are no living queer characters in the Harry Potter universe.

Everyone is (apparently) straight and cis and most are white on top of that.

At this point, in 2016, she has chosen to do this. These are all things she’s making decisions on and writing in 2016.

I’m not here to say that you can’t enjoy Rowling or her work, but it’s time that Potterheads start to be more honest with themselves. Is clinging to Rowling’s writing because of how much it meant to you worth standing by in silence or standing up for her when people talk about the ways her writing continues to fail them?

Rowling regrets everything from the endgame pairings (like Ron/Hermione being canon) to being unable to flesh out certain characters’ histories. Every year she publishes something about which death she wishes she hadn’t written or how some other character would have serious thoughts on current British politics decades after their in-canon death.

But somehow, she doesn’t regret writing a world where queer characters die without being loved (or mentioned on-screen) and where eight characters of color across seven books is heralded as “good” representation.

At some point, you’re going to need to look at the world of Harry Potter as it really is.

It’s a world where characters of color and queer characters are erased and footnotes into someone else’s story and therefore rendered unworthy of exposition and explanation.  It’s a world where allegories and metaphors for oppression and illness are more valid and necessary than showing characters dealing with non-fantastical racism or non-allegorical illnesses and conditions. It’s a world where queer fans and fans of color can’t see themselves in the canon.

And in this day and age, alongside everything Rowling presents herself as, that’s not okay.

It’s time that instead of making excuses for the diversity fails in Rowling’s work, we start demanding explanations.

Zina writes about comics, nerd history, and ridiculous romance novels when not working frantically on her first collection of short stories and complaining about stuff. One day, she'll settle down and write that novel.
View all posts by Zeenah →
This entry was posted in Book Talk and tagged anti-Native racism, Fantastic Beasts, Harry Potter, J. K. Rowling, Native representation, Queer representation, race and representation, representation. Bookmark the permalink.