On JK Rowling’s thing about after the fact diversity 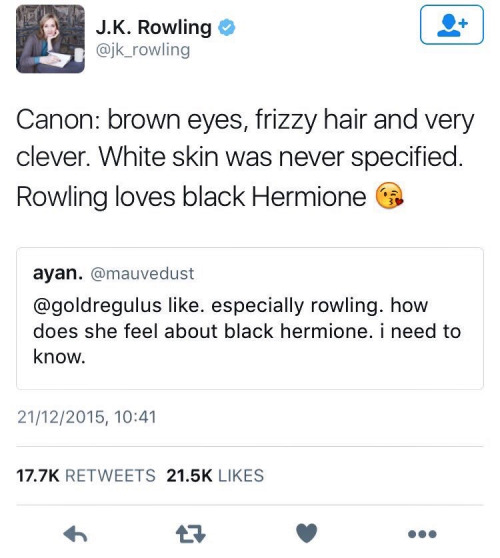 Sure, JKR loves black Hermione. Just… not enough to have written her as such in the text or any follow-up material for the Harry Potter series.

My big issue with all of this “after the fact diversity” that we’re seeing around JR Rowling and the Harry Potter series is that she’s getting so much credit for doing basically nothing with regard to representation.

There’s no reissuing the books with covers where more characters are characters of color. There aren’t any additional chapters showing Albus Dumbledore as gay in any capacity (and seriously, the idea of a gay man pining nobly into old age after the one who got away is just an excuse to not have to address any of his relationships omfg).

JKR still wrote 99% of the Harry Potter cast as white and straight. She still didn’t describe the characters in a way that made them prominently POC or LGBTQ. Dumbledore is gay offscreen. You literally have to read between the lines to start to suspect that maybe he wasn’t straight. Blaise Zabini was revealed to be Black in book five and then we never learned anything about him or got to see him as a character.

Almost all of her diversity comes after the fact and I don’t think that she should be getting praise for any of it. Especially because fandom has done most of the work on diversity for her. Like… She didn’t think up Black Hermione. That wasn’t even in her mind until fandom’s headcanons and the sort of universal idea of the character being Black the entire time hit her airspace and then she swans in to be like “oh well, I never made Hermione white in canon so I’m cool with this”.

And with this recent thing: JKR may have made Hermione’s race ambiguous (I guess) but that’s not a good thing. She still okayed illustrations in the books where Hermione is white and championed Emma Watson as the character. She still absolutely wrote the character while thinking that she wasn’t a character of color and that’s obvious as hell.

I get that before Harry Potter got huge, she may not have gotten to have control over the images of the characters she put out. But Pottermore? Fantastic Beasts? Things that came out after the HP series took the world by storm and that still are super white and super far from diverse? She definitely has more clout now than she did before and people know that HP will sell bank. So she could be demanding more in-text diversity. But she’s not. Not until the text is completed.

Unlike most creators of things, JKR isn’t a jerk about racebending becoming canon in new versions of her canon (like Frank Miller ugh) but she still didn’t do any of the legwork. She still didn’t write a Black British Hermione dealing with racism on two fronts. She still didn’t sit down and on her own go “Hermione is Black”.

I started the Harry Potter series when I still lived in the Virgin Islands. Which was like 2000/01. Maybe. I did read Hermione as Black when I was very small because I told myself that she had hair like mine and loved to read like me so why shouldn’t she actually look like me. (This is a similar story to what many Black fans of Harry Potter say who read Hermione as Black, btw.)

But JKR didn’t do that. She didn’t give me representation and she certainly didn’t intend for anyone to read Hermione as Black when she set out on the series.

And she’s just rolling along collecting praise for it like she’s ever written meaningful diversity into the Harry Potter series instead of totally transparent allegories for oppression.

I’m not going to get super excited for her being all “well I’m cool with racebending in canon and otherwise because I left Hermione’s race ambiguous” because that sort of ambiguity only hurts fans of color. It’s not even close to positive representation and I think that JKR needs to chill and look at actually writing about characters of color and incorporating them and LGBTQ characters into her HP works rather than mentioning them after the fact and getting ally cookies for it.

I’m beyond pleased that Hermione will be Black in the upcoming play, but I don’t think that JKR really deserves much (or any) of the accolades she’s receiving for it or her tweet.

Stitch writes about what needs to be written.
View all posts by Stitch →
This entry was posted in Book Talk, Rants and tagged diversity, Harry Potter, JK Rowling, racebending, representation matters. Bookmark the permalink.